Winx Club: Quest for the Codex

Crown Princess Aisha (Princess Layla in some versions) is the Fairy of Waves. She is the Crown Princess of Andros, as well as its Guardian Fairy. Aisha joins the Winx Club as its sixth member in the second season, and she is an alumna/student of the Alfea College for Fairies. Aisha is a self-confident and talented athlete who excels at dancing and swimming.

Aisha is a dark-skinned girl with a medium brown complexion, long, curly mahogany brown hair, and cerulean eyes. She has very full lips, and often she uses pink lipstick.

In Season 8, Aisha's hair becomes slightly reddish-brown, thanks to newer animation graphics used for the show.

Aisha dons a bejeweled lavender long-sleeved shirt with a teal blue flowing skirt, gray leggings, and teal and purple ankle boots. Her hair is pulled up into a similar style to her Domino outfit from Seasons 6-7, but her bangs are thinner and side-swept. She sometimes carries a small teal-blue purse around her wrist. 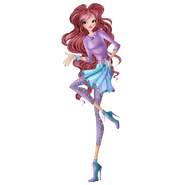 As the Fairy of Waves, Aisha's color theme was originally light-green to green. Now, her colors are turquoise-blue with accents of green, pale pink, and sometimes purple.

She is extremely opinionated and open minded. She is as intuitive like Stella, and when asked to, gives practical and pragmatic advice. She is also a talented dancer, athlete and speaks many different languages. The pixies trust her, and because of that Aisha is one of the few people who know the location of the Pixie Village. Aisha gives practical advice and always provides a shoulder to cry on. She continuously shows this caring nature throughout the show, comforting Musa after her conflict with her father, and calming Flora's nerves when she experiences qualms about her feelings for Helia. However, besides the other girls, she might even be the most sensitive of the crew, notably shown in Season 2 and Season 4. She has also been shown to be rather stubborn and impatient, which can get her into trouble by making her hold grudges and jump to conclusions. This could result from her isolated upbringing growing up, as she didn't really have many friends, aside from the Pixies and Anne, making her come off as a little anti-social at times when she first appeared.

Before the pixies mission in Season 2, Aisha seemed to be a bit boy-shy, getting embarrassed when Brandon called her cute. She also holds some respect for Sky for being a gentleman to her (much to Bloom's initial annoyance) as well as for freeing her from the cavern wall and praising her boarding skills. At the same time, Aisha dislikes Riven the most as she does not appreciate his attitude towards girls, which was why she supported Musa's decision about breaking up with him in Season 3. She considers herself just as good as the Specialists at sports and sword fighting and has similar interests at them. At one point, she even takes control of the Wind Riders from Riven. When Aisha joined forces with Nebula in Season 4, she became the enemy of the rest of the Winx, being ready to allow Nebula to imprison Queen Morgana in the magic mirror where she was condemned to fade into the shadows, and the Wizards of the Black Circle as well even if the Winx tell her that Nabu would never have wished for her to choose Vengeance. They thought that she wanted to avenge the death of Nabu, but she was not cruel enough to go through with it. Throughout the seasons, Aisha has lost her tomboyish side, possibly due to her opening up to the Winx and Nabu, but yet she still loves sports and is still determined and energetic. As she said in her old mood board, "Don't you think a girl can have both a wild heart and a flowing dress?" showing that while she has opened up, she still does not stifle her sporty tomboyish side and still is ready and raring to go on an adventure.

Aisha appears to have retained her original personality from the main series, yet she is noticeably more impatient and impulsive.

Aisha, as the Fairy of Fluids/Waves, has water/ocean-based powers. Aisha can control Morphix, a fuchsia-pink colored liquid composed of water molecules that can morph into any shape or form desired. Aisha uses Morphix to create a variety of solid structures such as shields, ropes, bo staffs, nets, and cages. She can use Morphix as both a solid and liquid substance. Aisha has been shown to manipulate the consistency of her Morphix, with its forms such as bouncing rubber, flowing liquid, sticky goo, insulation barriers, super-powered counter-attacking walls, and more. Aisha has been known to create useful and elaborate things with Morphix, such as an 18th-century cannon hoist for climbing down a cliff. Her Morphix power can also manifest itself into spells, such as attacks. Additionally, as shown in Seasons 3 and 5, Aisha is capable of separating water molecules to allow beings to breath underwater and protect them from oceanic pressure and the cold that comes with it.

Aisha is able to produce slime/glue to trap and restrain opponents, while using bubble to either contain opponents or to cushion falls. Aside from Morphix, Aisha can also manipulate most forms of liquid, mainly water but also drinks as seen in "Secrets of the Ruby Reef." As the Fairy of Waves, Aisha can also manipulate various aspects of the oceans, such as shifting the tides, controlling ocean currents, and generating tidal waves. She also possesses some weather-related abilities, such as conjuring rain showers, producing clouds for defense, and summoning miniature hurricanes. Her magic is pinkish magenta in color.

Aisha also knows some basic, first-level spells that all fairies can use, such as telekinesis, transmuting objects, and fixing minor messes. She is the most physically gifted of all the Winx, but she is also capable of keeping up with, if not surpassing the Specialists, often demonstrated through her knowledge of various sports such as rock climbing, wind riding, and staffmanship in "The Rise of Tritannus". Being the princess of the Ocean Planet, Aisha is very skilled in many water sports such as swimming, surfing, and windsurfing, but is also a skilled dancer(which was very well noted in "Broken Dreams". Aisha is capable of holding her own in physical combat as she has been seen holding back a mutant and also being the only one of the Winx capable of fighting on par with Tritannus even kicking him in the chin in the process.

Aisha's power is generated from dreams. She retains her title as fairy of fluids, and as such as much more precise control over liquids, mainly water as she is seen controlling lakes and rivers, but also bubbles and foam as she is seen reverting paralyzing foam back into the vents ("A Hero Will Come"). She can also shape the water into constructs such as hands/fists capable of knocking back opponents and breaking tree trunks in half. Aside from controlling fluids, she is shown to create bubble shields, summon rain showers, and generate tidal waves (and even raise massive volumes of water) capable of flooding an entire area. Her magic appears as translucent light blue/blue-violet bubbles.

Aside from her water powers, she is seen fixing minor problems, transmutation, and telekinesis, the latter of which she has seen more precise control over as she was able to apply pressure to a rock shard. Like all the other Winx, Aisha is capable of sensing other people's talents, very skilled in many sports such as basketball and water skiing, and can also breathe underwater. Her special Onyrix (Form) power allows her to see the presence of others within the water (more commonly known as hydromancy in "Mermaids on Earth".

Her weakness is that she is impulsive and acts without thinking first. Additionally, it is revealed in the episode "Neverland" that the Winx's powers, Bloom's included, are generated from dreams and thus, are closely linked with the World of Dreams. According to the World's Spirit, the Winx will lose their fairy powers should the World of Dreams fall into ruin.