Amarok is a Magiwolf and is Flora's bonded Fairy Animal.

He is a wolf with golden brown coat, green eyes, black nose and a big mane of white with purplish grey highlights. His belly coat is white. There are white highlights on his legs, feet and tail. There are some locks of dark grey hair on his head. 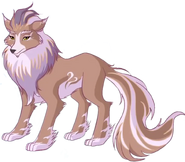 In this form, his coat becomes lighter brown. His tail is now light lavender and taupe/greyish brown. He wears golden footwears and headwear, each of the footwears is embedded a green gem in the center, while the headwear is embedded a purple gem in the center and two green gems on two sides. His mane is now in a gradient from white to light purple. There is a mask-like design on his face. The dark gray hair on his head becomes purple. There are some gems attached to his hind legs. On his back is a green saddle with gold trim.

Amarok appears to be mean as Miele mentioned, but he is in fact happy, playful, caring and obedient. He is also quite clumsy as he caused some troubles because of his oversize body and strength. Flora describes Amarok as "wild".

Amarok made his debut in "Adventure on Lynphea". Although he was not seen so much, he was seen clearly in the next episode. He was seen fighting against the fungi in the forest of Linphea. Moreover, he bonded with Flora, and since then he was always seen in the season.

Amarok made an appearance in "Back in the Middle Ages", while Flora was trying to push him through the doors and make friends with Squonk but showing his teeth to the Cry-Cry gave him the wrong impression and Flora wanted him to apologize. In which Nex thought this was a bad idea and calling Squonk ugly which caused him to cry tears on Heila and Nex causing the two laugh. In which Amarok turned into his playful nature and started making a mess of everything in the room until Flora told him sit down after the rest of the Winx came in to know what all noise was about. Helia only said that Amarok was playing giving him one of Heila's origami figures to play with.

In "Winx Trapped!", Amarok has finally made friends with Squonk and when he tried to make friends with Critty, she didn't make it easy by walking under a table but when Amarok tried, he accidentally knocked it over. When he tried to extend a hand of friendship Critty responded with her claws and quills which caused the Magiwolf to bark furiously. So, to distract them, Helia used his origami skills in which he and Squonk were impressed. It wasn't until Critty shredded Helia's origami castle, which caused Amarok to play his game chase which made a mess of everything resulting in Flora being disappointed in him and Helia helping him out of the table.

Later that night, he heard Kalshara inside the house and tried to wake up Flora and he saw Critty get abducted and at the end of the episode, Amarok was enjoying a party with the rest of the fairy animals and knock over a tray but instead he caught it making Flora proud.

Amarok, like the other Magiwolves, was a lone hunter. And due to this fact, he has an immense stamina, size growth and strength. He can jump high and is also agile. In the MiniWorld, it was discovered that with Flora's Nature Magic, he can grow strong vines and plants.