The Amazon Fairies are the Warrior Fairy followers of Diana.

The Amazon Fairies are followers of Diana that assisted her in getting revenge on humans for destroying nature. At the end of Season 4, the Amazon Fairies decided to help restore the missing fairy magic to earth as per Diana's request with the Amazonian human natives.

They wear jungle clothing and have almost leaf like wings. Their hair has warm colors, most of them have pink hair.

The Amazon Fairies channel their magic through nature making plant monsters, earthquakes and plant life. They also have the same standard Fairy weapon staff to channel their magic and shields that can be used as boomerang weapons. They have the ability to detect foreigners in their kingdom as well as those who are not in harmony with nature, which became useless when the Winx used their Sophix and connected themselves to the nature around them.

There was one Amazon Fairy in particular, who was called the Guardian of Diana’s Temple, who was able to bind the Winx Club to Magical chains and use magic pollen on the Specialists. Compared to the other Amazon Fairies, she was very powerful. 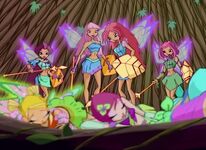 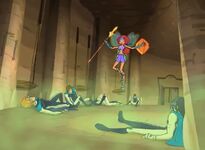 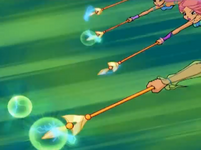 Add a photo to this gallery
Retrieved from "https://winx.fandom.com/wiki/Amazon_Fairies?oldid=172144"
Community content is available under CC-BY-SA unless otherwise noted.