Spiders: She yells and loses her head when she sees a spider

Robinson (having a crush on)

Amore is sweet, nice, and a pacifist. Like her bonded fairy Stella, she is into romance and likes matchmaking. She is calm even in the most grievous tragedies. Also, her life as a pixie was expanded. She has mutual romantic feelings with Ranger Robinson, and is one of the closest best friends of the major pixies of the series. Amore believes in her mission of making people fall in love. Amore is believes the world is a place where everyone loves each other. Because she is a pacifist, she does not do battle, instead, she thinks of a more peaceful way. She can count on her assistants: Otis, a male hippopotamus, and a watchful but rather grouchy owl.

In Winx Club, her sensitive nature is mirrored in her appearance. Amore wears a light pink puffy-sleeved dress and green headband with roses attached. Her wings are also green and they slightly resemble Stella's. Her hair is a dark magenta color, which is long and always worn down. Her eyes are dark blue, her lips appear to be a dark maroon color.

On season 6 forward Amore's civilian clothe is similar to her PopPixie clothes, with the exceptions being her shirt collar and the sash at the bottom of her skirt are magenta. 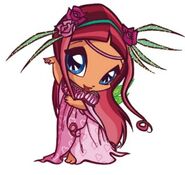 Amore wears a light pink top blouse with puffed sleeves and a looser, slightly darker puffed skirt with a green bow piece on the left side attached to a string going around the bottom. In her hair is a thick green headband with a green and yellow heart attached to it.

Amore wears a pink dress with a darker pink skirt piece underneath it and a pink rose at the center of her chest with a pink strap that goes around her neck and thinner green straps at her shoulders. She also wears pink roses at the toe slip on shoes and above the elbow of her white-pink gloves. In her hair is a very thin green headband-tiara piece with a green heart, and a purple heart attached on the left side of her head. Her wings are an off pink color and very wispy.

Amore wears a light green tank-top underneath a light pink-fuchsia jacket with small purple polka dots, along with a blue headband with a big green bow and hair scrunchies. She also wears a pair of blue shorts with yellow pockets.

Amore wears her usual headband piece in her hair, while she is now wearing no eye shadow. She wears a pale pink and fuchsia themed bikini with ribbons at the chest, and sides of her hips.

Amore wore a yellow and golden-orange themed outfit consisting of a tank-top, neck piece with green gem in the center, a green glowing bracelet, multiple layered skirt, and what appears to be fishnet leggings and gold heels. Her eye shadow changed to a light yellow color, while she wore her hair in pigtails with yellow scrunchies. She also has on a pale pink headband with a sun piece.

Her very first appearance is when Aisha tries to save the pixies. Sadly, Aisha could not save any of them except Piff. She is later saved during the Winx's rescue mission. She, along with the other pixies, becomes a refugee in Alfea. Even though they are spellbound by Darkar to be homesick, so they would return to pixie village, the Winx are successful in both disenchanting them and keeping them away of Pixie Village. She saves Brandon from Queen Amentia. When the Winx meet Helia, Chatta and Amore are thinking the same thing, as Flora introduces herself to him. At the end of season 2, she states that she had thought that she had bonded with the wrong fairy. Also, she helps the Pixies of the Codex to keep the portal to Relix open.

Amore's first appearance in the third season is in its first episode. She helps Stella pack her clothes for their summer vacation. She also helps Concorda in finding the way to reverse the spell on Stella, so she would return to her normal state. After that, she and the pixies have an idea to use a substitution spell, so they would look like the Winx. While the Winx are in Andros, trying to free the mermaids from Valtor's spell, she continues to disguise as Aisha until Griselda finds out. When the Winx goes to the Gloomy Wood Forest to look for Faragonda, the pixies find out the horrendous spell of Valtor. When the Winx goes to Cloud Tower to avenge Tecna's "death," the pixies covers up for them once again. When Bloom returns from Pyros, she tells Sky about it.

In Season 4, The Winx went to the Tree of Life to find where the Last Fairy of Earth is and, as Tecna said that it was near the Pixie Village, they went to ask the Pixies' help. The Winx found out that the pixies were inside a monster's stomach. Piff was safe, but Stella was eaten by the monster. Layla found out that the monster had been created when Piff's nightmares were made real by a Dream-Eater Butterfly, which is a butterfly with the ability to turn people's nightmares into reality, which was on Piff's forehead. Layla removed the butterfly from Piff and the monster disappeared, saving the pixies' and Stella's lives. When the Winx went to Earth to save the Earth Fairies and restore magic on Earth, Amore remained at the Pixie Village with the other Pixies, waiting for the new fairy to come to Alfea and get bonded with a Pixie.

In "The Legendarium", Amore and the other pixies go to Alfea and celebrate at Faragonda's 100 years anniversary party. Back in Pixie Village, she is seen trying to defend her village along with the Winx and other pixies. Because of the disappearance of some of the pixies, Amore, along with the remaining pixies, becomes refugees of Alfea again. There, they help the Winx regain their lost magic and in fulfilling their quest to locking the Legendarium. They help them in Domino, in Egypt, in China and in Gardenia. They also take care of the Legendarium Key, while the Winx are in Zenith.

Amore and the other pixies help rebuild Alfea. Then Amore (along with the rest of the pixies) help the Winx Club find the key to open the portal to Obsidian.

Amore, along with the rest of the pixies, makes a small appearance while setting up lanterns but get attacked by the Trix.

In "A Pixie Fish"' it is revealed that Amore and Robinson liked each other for a long time but were too shy or too scared to say anything, when Robinson finally asked her to go on a date with him, he accidentally calls her to go swimming in the colored waters of the Seven Streams without knowing she could not swim. Amore tries doing a magical potion that will make her swim like a fish, but instead she becomes one. Then, Chatta, Livy, Lockette and Fixit helps her reach the colored waters of the Seven Streams transforming her back to a Pixie just before her date.

Amore is in each and every episode of the series, for she is a major character.

With her MagicPop power, Amore captures the bad thoughts of people and controls the negative feelings, calming them down. She is considered as the third most powerful female pixie.

Retrieved from "https://winx.fandom.com/wiki/Amore?oldid=470174"
Community content is available under CC-BY-SA unless otherwise noted.