She is a light green lamb with orange-yellowish eyes and spring green hair which are tied by two red hair ties on either side. She wears a sweater-like outfit. Her wings are pink. 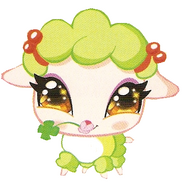 Just like Bloom, she is adventurous and finds fun in everything. Though she does get scared quite easily, quickly hiding behind Bloom when a pig fairy pet oinked.

Belle was one of the plush animals the Winx were sent to throw out, until Flora used her nature powers to bring them to life.

Belle, like the rest of fairy pet friends and Kiko, was temporarily given the ability of human speech by Roxy. When Artu, Roxy's dog, reported to the Winx that Roxy had been kidnapped by the Wizards of the Black Circle, Belle initially remained at the store to keep Artu company. But the loyal Artu could not wait and went out searching for Roxy. Belle along with the others, follow suit and assisted in distracting Gantlos (who was on guard duty to keep Roxy and Klaus from escaping) while Artu frees Roxy and Klaus.

Her owners then returned home with the Specialists and Roxy. She is finally freed from the restraints after Helia restrains Duman.

She is seen at various intervals throughout Season 4, usually while the Winx are at the Love & Pet store.

Belle is adopted by Bloom from the past in Issue 60: Future Adventures. She follows her owner's adventure in the future and ends up getting caught in Stormy's winds. She is safely caught by Aisha however and eventually returned to the present time. Flora also jokes that her and the rest of the fairy pets existence in this timeline is a paradox.

Belle was also present during the conference meeting regarding Earth and its event pertaining to magic. As Bloom discusses their success with the fairy pets, she urges her to show everyone her cuteness. She snuggles with one of the members of the council in the audience which makes him feel a sense of adoration. When one of his colleges chides him for losing his composure, the member reminds him that he is getting and would like some companionship, making his college realize that it is true for him as well.

And when the Winx were noticing Roxy's change in mood, she seemed upset about something, they had Belle and her friends go to Roxy's room to see if they could find out anything. As her friends distract Roxy, Belle reads what the fairy had written in her notebook - Manuel. Once she returns to the Winx, she writes it out for them to see.