Charybdis is a character exclusive to the Winx Club Comic Series. He makes his first and only appearance in Issue 104: The Mirror of the Sea initially as a sea monster who was cursed by an ancient witch alongside his beloved, Scylla.

As a monster, he is a giant blue sea serpent, with fins along his body. He has sharp teeth and, red glowing eyes. 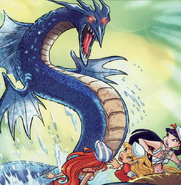 He wears sandals, and a green and white toga like outfit. As a human he has light tan skin, dark eyes, and short black curly hair.

He is shown to care deeply for his fiancée, Scylla. But he can be a bit clueless as he was unaware that Circe had feelings for him. As a monster he's more aggressive, and comes off as a far more dangerous monster.

Retrieved from "https://winx.fandom.com/wiki/Charybdis?oldid=480050"
Community content is available under CC-BY-SA unless otherwise noted.