TBA
Chatta or (Chatter in Movie 1) is the Pixie of Gossip and is Flora's bonded pixie. In Season 2, Chatta helped Flora express her feelings to Helia, which resulted in Flora earning her Charmix. Chatta usually translates Piff's baby talk.

She wears a lighter green version of Aisha's fairy outfit without the sash and a shirt like Icy's civilian shirt. Overall, she resembles Stella in appearance and in mannerisms. Her wings are blue color. She also wears panties under her skirt which have the same color as her outfit. Chatta has green boots on her feet and appears to be the tallest of the pixies.

In season 6, she wears the outfit seen in PopPixie and it consists of a short bright green sweat jacket with matching shorts and a lavender colored shirt underneath. She wears the same green shoes, and still keeps her hair in her trademark ponytails.

Chatta's outfit consists of a short bright green sweat jacket with matching shorts and a lavender colored jacket underneath. She wears the same green shoes, and still keeps her hair in her trademark ponytails. 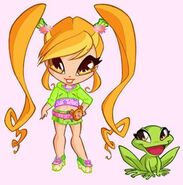 Chatta wears a glowing green dress with purple ruffles on the top and shoulder straps, along with a purple underneath layer to the dress. She wears purple wrapped bracelets on her wrist, green shoes, and a wispy glowing green cloth-headband. Her scrunchies are pink and tube-like.

She uses her gift of the gab to convince, confound and even stun people, putting her enemies to flight. Chatta is the queen of gossip: with her power she can get anyone to tell her anything and she uses her talkative ways to defend herself and attack. But above all, the information that she gathers is the best way to get herself out of trouble. Her special power is useful whenever her friends need information. When she goes into action against her enemies she hears them even when they are very far away, a skill which in her everyday life allows her to intercept all sorts of gossip and she is always the first to know the latest news. With her MagicPop, she has the ability of super hearing.

In "The Legendarium", it is seen that Chatta and the other pixies are able to teleport.

As seen in "Broken Dreams," whenever Chatta is in danger/trouble, she is able to send a psychic alert to her bonded fairy to notify her about her current condition.