Clarice is a fairy who attends Alfea.

She has orange hair in a high pony tail, held by green elastics. She also has green hair clips in her hair. She wears a pale green sleeveless top with a collar. She has pale green eyes, and wears dark eye shadow. And she has pink lips and very light tan skin. 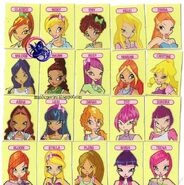 Not much is known about her personality, but she has been shown to be in distress a few times.

In "Honor Above All," She makes a cameo in class at Alfea.

Clarice may know some basic, first-level spells that all fairies can use, such as telekinesis, transmuting objects, and fixing minor messes.

Retrieved from "https://winx.fandom.com/wiki/Clarice_(Season_1)?oldid=482875"
Community content is available under CC-BY-SA unless otherwise noted.