Coco is a pink kitten with aquamarine eyes and dark pink hair. She has light pink whiskers and wears a cream-colored collar with a small gold bell attached to it around her neck. She also wears a bright green headband always decorated with two white flowers on the side. Her wings are light cyan. 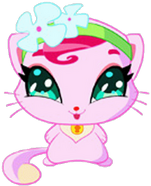 She wears a light-green headband, wristband and tailband, and lilac two piece tights.

Similar to her owner Flora, Coco shares her love of flowers and other plants. She also loves to cuddle with those around her.

Coco was one of the first plush animals that Flora brought to life using magic. Since then, she has made various appearances in the Love & Pet store, usually in the company of Flora. She was also present during Roxy's fight with Gantlos.