Back in the Middle Ages

Critty is a Quillcat and is Musa's bonded Fairy Animal.

She is a feline cat with pink fur coat, green eyes, purple ears and pink nose. There are reddish purple fur with dark purple details on her back and head. There are light pink coats on her feet. Her tails are tricolored: the pink coat in the bottom, dark orchid coat in the middle and reddish purple coat on top. Her tail is decorated with a gold bell attached to a blue ribbon. 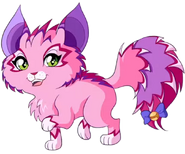 In this form, Critty resembles a full-grown lioness and her fur gets longer. There are hot pink details on her head and forelegs. Her tail resembles tigers', and the fur stays in either pinkish purple or hot pink. Her ears become dark purple. She wears gold bracelets that are embedded with cyan gems. There are also cyan gems on her forehead. On her back is a cyan saddle with a gold trim.

Critty appears to be aggressive, competitive and a drama queen when she was chased by the soldiers. But in fact, she is artistic and talented, as she can make amazing origamis and other kind of arts and she enjoys music. Similar to normal cats, she is fond of water, Which Musa describes Critty as "mysterious".

In "Back in the Middle Ages," she is seen in front of the Winx scratching a wanted poster as well as being aggressive towards them climbing up a tree. She, gets herself trapped by a stonewall as the royal guards cornered her, she prepared to defend herself which she did pretty well until the head of the guard tried to sneak up on her until the Winx intervened. But after the fight, she disappeared. The Quillcat appears at the end of the episode happily listening to Musa's and Orlando's song.

In "The Fairy Cat," after finding the Quillcat, Brafilius summons the Water Monster to destroy the Winx and get the special cat but luckily, Flora manages to defeat it by using her special Butterflix Power. Then, Musa stops Brafilius from abducting Critty by using her special Butterflix Power and saves her. After the ordeal Musa bonds with her, discovers that she wasn't the creature the Winx were looking for and names her as Critty.

In "Winx Trapped!," the Specialists try to arrange a welcome party for Critty but she showed no interest in them. When Squonk and Amarok came in and tried to introduce themselves to her, she hisses at Amarok. So Helia tried to distract them with origami and ended up in a competition with Critty which ended up ruining the party. Then, during the night she was sleeping with Musa until Kalshara abducted her. Musa and the girls followed Critty's communication message when she was taken to the hunter's lair. When they found Critty and the other fairy animals that the duo had imprisoned, the girls were surprised to see them under Brafilius's spell. But with the help of Stella and Shiny, all the fairy animals were freed from Brafilius's control and Critty returned to Musa and joined in a party with everyone at Alfea.

Critty's claws can be turned into spikes and they are mostly used in the show to manifest her artistic sense. In the MiniWorld, it is seen that she has sensitive ears for disharmony.