The Crystal Drop is a magical crystal that appears exclusively within the Winx Club Comic Series. Making its debut in Issue 110: The Magical Valley of Linphea, the Crystal Drop is created by Tritannus after successfully enclosing the magical energy of Linphea within a multi-sided crystal.

The Crystal Drop was created by Tritannus as a capsule to contain all the magical life essence of Linphea's plant-life. Upon its creation, Tritannus intended on making off with the stolen essence and presumably absorb it into his body to gain greater strength, while leaving all of Linphea to wither out and die.

The Crystal Drop is a clear, moderately sized, diamond-shaped crystal with a minimum of 32 sides. It gives of a faint white glow signifying the magical essence enclosed within it.

The Crystal Drop makes its debut halfway into Issue 110 right as Tritannus finishes absorbing the lifeblood of Linphea's plant-life. Just as he feels the aura of several fairies approaching, he sends his mutants out to attack as he tries to make off with the Crystal Drop.

While the Winx try to beat back the mutants without harming them, Serena has Bloom chase after Tritannus to take back the Crystal Drop but, unfortunately for them, Tritannus hides behind the thicket of the Roots of the Shimmering Flowers.

Just as Tritannus is about to make his getaway, the Roots' vines begin to ensnare him and snatch the Crystal Drop from his grasp. Bloom, Serena and Desiryee, having followed Tritannus into the Roots' creeping vines, see Tritannus entangled within them, which causes Bloom to realize that Flora had answered her distress call.

With the Crystal Drop now in Flora's hands, she and Bloom are now free to attack Tritannus as he tries to escape the vines. After doing so, Flora and Desiryee are left with dispelling the magic pollution Tritannus threw at them as cover for his escape. With everything settled, Flora uses the Crystal Drop to return the Roots' lifeblood before the plant-life of the Shimmering Flowers Valley dies off for good. 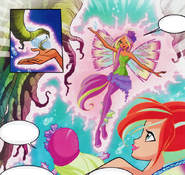 Add a photo to this gallery
Retrieved from "https://winx.fandom.com/wiki/Crystal_Drop?oldid=477154"
Community content is available under CC-BY-SA unless otherwise noted.