Dance Dance Revolution: Winx Club is a game based on Season 3. It was developed and published by Konami and released in the first quarter of 2009 in European countries for the Wii.

The game focuses on the Winx Club series, featuring songs and characters from the show as well as Japanese songs unrelated to the series.

“Dance Dance Revolution: Winx Club for Wii combines the fast-placed movement-based gameplay of Konami’s DDR Hottest Party with characters, settings and songs from the Winx Club universe. Using a special dance mat controller, players are invited to match a series of onscreen arrows with the corresponding foot movements, while the Wii controllers are used to match necessary arm movements. Thus, as the various Winx-related tracks play, characters from the show appear on screen.” 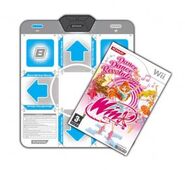 Retrieved from "https://winx.fandom.com/wiki/Dance_Dance_Revolution:_Winx_Club?oldid=485690"
Community content is available under CC-BY-SA unless otherwise noted.