Desiryee is the Keeper of Linphea's Ocean Gate and Flora's bonded selkie. 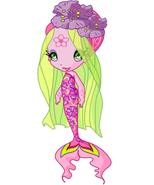 She is a good-hearted, caring, sweet and a very kind Selkie, who loves and favors all of nature just as much as Flora. She often decorates the underwater ocean with flowers and plants.

In "Trix Tricks," she is first seen decorating a section of coral with flowers before Tritannus arrives and takes away her powers. She is later seen after Sonna and Illiris finds Flora, Stella and Musa and bring them to her, where she and Flora bond.

In "Test of Courage," she is seen along with Phylla, and Illiris on Earth where she finds the Pendant of Eraklyon and keeps it to give it to Flora to find out who it belongs to. They then fight off Tritannus to protect Serena but he defeats them and enters the gate. She then goes along with Stella, Flora, Bloom, and Aisha to finds the Gem of Courage.

In "Sirenix," she together with the other Selkies are attacked by Tritannus. They are also seen when the Winx restore Lake Roccaluce and later enter the Infinite Ocean.

Desiryee makes her first appearance in the movie in a scene where Omnia was captured by Tritannus and Trix. She and the other Selkies were trapped in a lighting barrier, preventing them from leaving it and were covered by something not letting them speak. Then she as well as the other Selkies follows the Winx to the place where the pearl was hidden and stays outside to warn Omnia if Tritannus escapes with the pearl. She was last seen in a final fight against Politea.

Desiryee, with the aid of the flower symbol on her forehead, she can close and open the gate to Linphea, enter the Infinite Ocean and shoot pink energy bolts. She can also converge her powers along with other selkies as seen in multiple episodes in Season 5.