Enchanted Plasma is an Enchantix/Believix offensive spell used by Aisha where she either shoots a small pink ball or beam used to attack, forms a surfboard to defend herself, or launches a large amount of Morphix at the enemy to immobilize them. 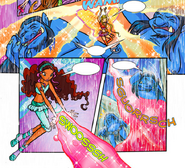 Retrieved from "https://winx.fandom.com/wiki/Enchanted_Plasma?oldid=496044"
Community content is available under CC-BY-SA unless otherwise noted.