Feras is a character that appears exclusively within the Winx Club Comic Series. His first and only appearance is during the Hallowinx mini-series in Issue 91: Werewolves in Shady Hill. Initially, he allies himself with the remaining Winx fairies after beating back a werewolf, but leaves them behind once Flora begins to suspect him. At the very end of the issue, it is revealed that Feras was a werewolf trying to usurp his pack's leader.

Feras is a young man with a slightly muscular build, a light skin tone and silvery-grey hair. His hair is long and flows down to the ends of his jacket with a small braid resting on the back of his neck and a few stray hairs flowing out from his forehead. Two long silvery hairs also flow out from his sideburns and down to his chest. He also has dark grey eyes, but seems to be blind in his right eye, which also has a scar running over it, and a small beard.

Feras wears a yellow shirt under his red and blue short-sleeved jacket with its black collar flared out to the sides. He wears bandages over his right forearm, a black bracelet on his left wrist, and a thin necklace of fangs around his neck. He wears light blue jeans bound by a black belt and blue and red striped running shoes with white soles.

He also has noticeably pointed ears.

He has long white claw like nails at his feet. He has grey and white fur, torn up jeans, his jacket now ripped up looking more like a vest. He wears bandages over his right forearm, a black bracelet on his left wrist, and a thin necklace of fangs around his neck. 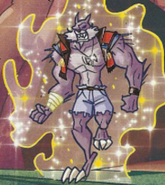 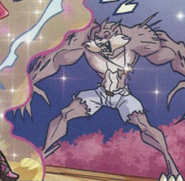 Initially, Feras comes off as an intense individual with a strong moral code, as he jumps into a fight with one of the members of the Black Claw Pack without hesitating when he sees Bloom, Stella and Flora having trouble defending themselves. He can be open to those he sees as allies, like when he saw the three remaining Winx girls as fellow magic-users who had been blessed with the protection of the goddess Gaia, as he goes on to teach them how to use their powers in harmony with the earth with no qualms. He also seems to hold a slight concern for his appearance, as the first thing he does after rescuing the Winx is apologize for "looking unpresentable."

Due to having to fight alone for most of his time in Shady Hill, Feras is also very cautious, especially when it concerns the Silver Pendant as it is the only item on him that acts as a sufficient weapon against the werewolves. He tries not to use it too much due to his own weakness to the pendant, and would rather keep it hidden in his jacket and away from those unaware of its power.

Feras is also very goal-oriented as he is driven by his one goal of usurping Garont. This aspect of his personality also shows that Feras' views are quite warped as his aforementioned strong moral code is formed around the belief that the Black Claw Pack under his own leadership would secure their future. Even when it is revealed that a forced usurpation would spell ruin for the Pack's future since Feras was never chosen by Gaia, Feras believes that the very act of defeating Garont would prove to Gaia that he is worthy.

Feras makes his debut halfway into Issue 91, appearing from the forest ready to combat the werewolf that had tore itself free from Flora's vines. As soon as he is being overwhelmed by the beast, Feras pulls out a silver pendant from the inside of his jacket and the pendant shines intensely with the light of the moon, which causes the werewolf to flee. Once the werewolf is gone, Feras collapses to the ground and promptly apologizes for not looking presentable to the Winx when Bloom offers to help him up.

Bloom introduces herself, Stella and Flora to Feras as being the Winx Club Fairies and Feras reveals that only those who are protected by Gaia can use their magic in Shady Hill. He soon recognizes the three fairies as the ones who "made the magic" and reveals that he is a simple park guide who found out that his magic power is a natural counter to that of the werewolves'.

While Flora and Bloom come to learn that the magic they brought back to Earth is what is causing the legendary creatures to become a reality, Stella picks up the Silver Pendant and marvels at its beauty until Feras snatches it from her, warning her that it holds a great power that can only be used against the werewolves. Due to the pendant being made of silver, the moon's metal, it has the power to damage the werewolves. Flora then asks Feras how he became so knowledgeable of werewolves and Feras claims that he came to learn these things while keeping close to nature. Bloom then asks Feras if he will be able to help them find their kidnapped friends and Feras insists that he can as well as reveal to them as to why the Winx's magic is in harmony with nature. The four of them wander deeper into the forests of Shady Hill as Stella audibly wonders where everyone is.

As the group continues making their way farther into the forests of Shady Hill, Feras explains to the fairy trio that Gaia is the answer they seek if they wish to defeat the evils that threaten nature. When Flora points out that the first werewolf they had encountered claimed to be a guardian of Gaia's, Feras insists this werewolf was never chosen by Gaia to be her guardian. Suddenly, the four of them become targets for an ambush orchestrated by the werewolves and Feras quickly advises for the girls to use their powers in harmony with nature if they wish to fight back.

Feras then engages in a fistfight with one of the werewolves as Flora, Stella and Bloom try to figure out how to use their powers in harmony with nature. Tapping into her ability to perceive auras, Bloom sees that Feras possesses an aura similar to that of the werewolf he is fighting with, but Feras quickly begins to lose strength during the fight. Feras tries to pull out his Silver Pendant as a last resort but is still hesitant on using it to its fullest. Unfortunately, one of the werewolves grabs hold of his arm, causing him to drop the Pendant, but once it falls out of his hands, the Pendant reflects the light of the full moon back at the werewolf with so much intensity that it blows him away. Stella takes notice of this and comments about it to Feras as Flora thanks him for his advice as, thanks to him, they were able to defeat the other werewolves. Feras quickly commends the fairy trio before revealing that they have just now defeated the Black Claw Pack. He tries to explain that they will be facing something far greater than the Pack but he is interrupted by Stella excitedly shouting upon seeing Ginger and the other Fairy Pets again.

Impatient, Feras insists that they need to move quickly or else the leader of the Black Claw Pack will be warned of their impending arrival. When Bloom asks why they should even look for this leader, Feras claims that they will all be in danger if they do not find him and insists that they follow the tracks left behind by the werewolves they defeated. He then decides to leave the group entirely when Flora receives a warning from the trees to not follow the wolves, still insistent on taking down this Pack leader. Flora tries to go after Feras but Bloom stops her and reveals to both her and Stella what she saw when she tapped into her aura-related powers.

Elsewhere in Shady Hill, Feras finds and confronts Garont, leader of the Black Claw Pack. He reveals that his pack has been done, also claiming that he is unfit to lead it, and insists that the moon will not choose him. When Garont tries to tell him that he cannot usurp him, Feras claims that he can be abiding by the laws set by his ancestors and attacks Garont while claiming that he will lead the new Black Claw Pack upon Garont's defeat.

Grabbing a strong hold over Garont, Feras drags him up the nearby cliff as he dismisses Garont lamenting over how their pack being doomed into exile if Feras goes through with this, as he believes that all werewolves will inherit the Earth under Gaia's will and his guidance. Just as he is about to do away with Garont though, Feras is startled by the sight of Coco landing on his shoulder. He then turns to find that Flora had followed him and drops Garont in surprise when Flora demands that he leave as he is not welcome in this place.

Instead, Feras tells Flora not to meddle with affairs that do not concern her, especially after she refused to help him defeat Garont in the first place. He then goes on to claim that werewolves have become weak after losing their honor and courage but cuts his speech short to stomp Garont into the ground to prevent him from fleeing while telling him to stay and watch as the moon chooses him to become the new Pack leader. His plans quickly crumble however, when Flora reveals that nature has chosen her as its newest guardian and, with a swing of her sword of moonlight, Flora defeats Feras, putting an end to the bout that overtook Shady Hill.

As thanks for her valiant efforts and to symbolize Feras' betrayal, Garont leaves the Silver Pendant in Flora's hands.

Retrieved from "https://winx.fandom.com/wiki/Feras?oldid=480282"
Community content is available under CC-BY-SA unless otherwise noted.