Flora is the Fairy of Nature. She hails from Linphea, where she currently acts as its Guardian Fairy. She is Helia's girlfriend. The team usually relies on her for potions and magic advice. Flora is one of the founding members of the Winx Club, being the third Winx girl introduced after Bloom and Stella, and is an alumna/student of the Alfea College for Fairies as of The Secret of the Lost Kingdom.

Flora is a young tan-skinned girl with long light-brown hair that has bangs framing on either side of her face where it has visible blonde streaks with a single small hair strand sticking up (it is sometimes unseen in both her civilian and fairy forms) and narrow green-jade eyes.

Flora's civilian look for both seasons of World of Winx consists of a small short-sleeved light blue hoodie with lighter blue flowers across the chest worn over a white dress shirt, a skirt in various shades of pink and white, sparkly silver leggings and strapply pink heels. She also wears six different bracelets on her right wrist and always has one long strand of hair hang off the right side of her face that often rests on her right shoulder. Occasionally, she can be seen sporting a small, square pink handbag/purse. 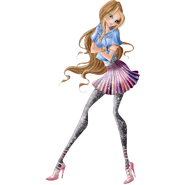 As the self-proclaimed Fairy of Nature, many of Flora's Fairy Forms retain a flowery theme to them; namely that of a pink rose. While pink stands as the signature color of Flora's various forms with green as an accent, some forms have the colors reversed with green as the primary color and pink as its accent.

Flora is shown to be a very calm, soft-spoken, caring, sweet, shy and genuine girl who loves plants and vegetation of all kinds. Being interested in experimenting with her plants, Flora became the potion master of the group who specializes in brewing and creating remedies and medicines from the uses of her magical plants. Due to her gentle and caring personality, Flora is strongly connected to nature and loves helping people. She is shown to have a sensitive personality to the point where she would instinctively care for her friends as well as her plants when they are in distress.

Flora is the most mature member of the Winx as she possesses a deep sense of love, peace, happiness and tranquility. However, it is shown that Flora has an insecure side to her personality as she would have problems believing in herself at times. Her insecurity would sometimes cause her to hide most of her feelings to the point where she would have problems expressing them. Flora is one of the most diligent student at Alfea and is cautious of her actions. Although she has a kind-hearted side, she at times gets very angry at her enemies which can cause her to act quickly and show a more aggressive side of herself. This is seen a few times through the series.

As an older sister, she is shown to be quite overprotective who often forgets that people do mature and can protect themselves. Miele often has to deal with this side of Flora whenever the latter suspects a mission to be too dangerous. In this case, Flora has demonstrated some level of ignorance as this attitude tends to hurt Miele's feelings.

Flora, as the Fairy of Nature, has nature-based powers. Flora's strength relies on her surrounding environment. If she is in a dark area, her power is weakened, but if she is surrounded by nature, she can maintain her strength much easier. Flora can create binding vines and walls of vines, as well as blasts of flowers and pollen, either as offensive attacks or a diversion. She can also control forests and manipulate the earth and its energy. Flora is able to hear the voice of nature speaking to her, more so than in an instinctive manner that all Alfea Fairies are taught. Rather, she is able to use her magic to listen to the voice of the forest. This skill has also proven to be a disadvantage at times, as the destruction of nearby nature will cause excruciating pain to her and weaken her own self and her ability to focus her magic properly, even her flight.

Flora can also create huge vine barriers to trap her enemy or protect those surrounded by it. Flora has shown developed abilities of controlling the forces of nature such as controlling the seasons, feel the emotions of the surrounding environment and even summon animals (Mission at Cloudtower). She can talk to plants, bring them to life, help them grow, and nurture them when they are sick. Other related abilities are generating plant-based foods, altering the growth pattern of plants and establishing a bond with the surrounding environment.

Flora in terms of elemental power represents earth which she displays by setting off earthquakes and smashing a boulder with her mind. Her source of power is life itself as she has been seen giving life to inanimate objects such as when she used her magic to turn the Fairy Pets into living creatures. She also has a connection with the air being capable of summoning powerful breezes, using plants to absorb smoke and produce oxygen, and producing fragrances that can be used to repeal an enemy or calm them down seen in Stella's Big Party and Mission for the Prime Stars. Flora has developed the ability to physically heal other beings mostly after they have experienced a recent trauma. Her magic is green in color.

Like all magical beings Flora can utilizes magical energy based attacks and defenses. She also knows some basic first-level spells, such as telekinesis, transmuting objects and fixing minor messes. Flora is shown to be gifted with potion brewing as she was able to come up with a reversal elixir to undo the Treants.

Flora still maintains her status as the Fairy of Nature and thus, retains her nature-based oriented powers and draws power from the nature of her surroundings. She can conjure up vines to bind her enemies, which is even a specialty of hers granted by her Dreamix powers, rescue others if necessary, and release blasts of flower petals. However, her powers seem much more limited as, more often than not, her vines will fail to keep an enemy restricted.

As a nature fairy, Flora can directly communicate with various plants and she showcases this ability numerous times like when searching for the Crocodile Man and Yu in multiple episodes or by communicating with forest spirits. Her powers are further amplified upon gaining Onyrix, as she is granted the ability to travel through the shared root system of plants from one place to another. She also has the ability to sense living aspects of her surroundings more so than any of the Winx as she was able to discern the cave of the Enchanted Swamp was a living creature in the episode "The Alligator Man." Additionally, through the use of her special Onyrix Power, Flora is capable of restoring any damaged nature back to the time when it was more glorious and healthy. Flora still maintains her control over plants mainly by manipulating vines, but she is also capable of seeing through the point of view of plants, control forests more specifically calling forth branches as well as intense winds, and capable of conjuring food(mainly fruits and vegetables). She displays the ability to shoot green energy beams in The Alligator Man.

However, being so heavily connected to nature as she is comes at a price, as Flora can be heavily injured if she is unable to connect with the surrounding nature due to it dying or already being dead. As shown in the episode "A Flower in the Snow," Flora experiences internal pain at the loss of any surrounding nature and gets severely weakened from it, even to the point of being rendered powerless unless the nature is brought back.