The Fossegrim is a sinister spirit that resides in a lake with no light located beneath the Golden Auditorium. He is exclusive to the Winx Club Comic Series, debuting in Issue 126: The Magic Exhibition.

“There is a powerful and evil Fossegrim that lives in the underground lake of the Golden Auditorium!”

According to the Fossegrim's legend documented within the Legendarium, he is a sinister water spirit that resides in a lake underneath the Golden Auditorium. It is safe to assume that the Fossegrim is native to Melody as the lake in which he lives in looks ancient, almost as if the Golden Auditorium had been built above the caverns leading into it.

Little else is known about the Fossegrim except for how skillful he is with his fiddle. In fact, while Daphne teaches her History of Magix class, she mentions that the Fossegrim uses the sinister sounds emitted from his fiddle to break the will of any living being unlucky enough to be subjected to them.

The Fossegrim appears in the form of a slim young man with light blue skin, long black hair and glowing eyes that are completely yellow. The tips of his ears, nails and teeth are sharp and pointed and he wears nothing but a mossy-green loincloth around his waist. 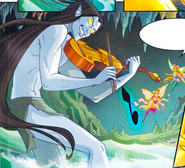 The Fossegrim is first mentioned in the very beginning of The Magic Exhibition by Daphne as she taught her History of Magix class with the lesson of the day being about how immense forces can be created through the combination of music and magic; the Fossegrim serving as an example of what such a technique could do if used for evil.

The Fossegrim is later summoned by the Legendarium by Selina with the hopes of ruining Musa's big day as Alfea's representative at the Golden Auditorium's exhibition. Emerging from the depths of a lake located directly underneath the Auditorium, the Fossegrim carries out the will of Selina and the Trix by sneaking into Musa's dressing room moments before her performance and leading her back to his lair after hypnotizing her.

Later that day, the Winx arrive at the Golden Auditorium just before Musa's big performance. Unfortunately, just as Musa prepares herself backstage, the Fossegrim bursts into the room playing his fiddle. Its melody entrances Musa, allowing for the Fossegrim to whisk her away back into his lair!

Enraged, Stella demands to know what the "mutant sardine spawn" did to Musa, but the Fossegrim insists that she will find out soon enough. In that moment, Flora recognizes the Fossegrim as the creature Daphne was teaching them about in class and reminds Stella that they will need to stop him from playing his fiddle, as his powers come from the music he plays.

As the Fossegrim positions his fiddle under his chin and draws the bow towards its strings, Flora fires a bundle of vines in his direction to snatch the fiddle away. Unfortunately, she was a moment too late as the Fossegrim was able to play one note on his fiddle and he uses the dark power within that note to drastically raise the water-level of the entire lake!

With the water now receding, the Fossegrim leaps for his exposed fiddle as Tecna reminds her that she must destroy it since it is the source of his powers. Acting quickly, Bloom launches her Volcanic Attack at the fiddle and destroys it before the Fossegrim is able to get his hands on it. With the fiddle now destroyed, Musa is freed from her trance and transforms into her Bloomix to join the fight.

Powerless, the Fossegrim swears that the Winx will pay for all this but Bloom taunts him as he is now up against all six of the Winx. Aisha then gives Musa the honor of dealing the final blow to the Fossegrim, which she does happily with her Crystal Voice spell. With the Fossegrim defeated, the Winx rejoice as Selina and the Trix are left frustrated at yet another failure. Icy takes this out on Selina by threatening her, claiming that it would be better for her if she used her Legendarium to evoke a monster worthy of its name. 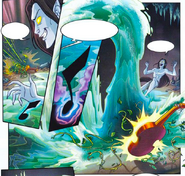 Add a photo to this gallery
Retrieved from "https://winx.fandom.com/wiki/Fossegrim?oldid=480289"
Community content is available under CC-BY-SA unless otherwise noted.