Ginger is a light pink poodle with purple eyes. She wears pink heart-shaped clips by her puffed ears and a green bow with tiny hearts all over it pulling a puff of hair up in the center of her head. At her chest is a small purple diamond. Her wings are yellow. 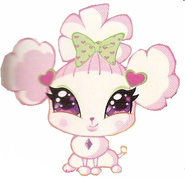 Ginger dress is lilac with a V neck, frills at the top and bottom of her dress, and a yellow belt. For accessories she uses two heart pins, being one in each ear, a light green ribbon at her left side, and a rhombus in her neck.

When using this outfit, the fur in her hair and ears is more pink than its natural color.

Very pampered, Ginger just loves new outfits or accessories. She is very similar to Stella in terms of being more concerned for her appearance then anything else. Like Milly, she usually fights for Kiko's attention.

Ginger was a plush doll headed for the trash in one of the girls' jobs until Flora used some of her magic to bring them to life. Since then, she makes occasional appearances, typically with Stella at the Love & Pet store. She was also seen with Kiko during Roxy's fight with Gantlos.

In "Musa's Song" Ginger uses a lilac dress and fight with Milly over Kiko's flowers.

Ginger appears in Issue 60: Future Adventures as she is adopted by Stella from the past. She follows her owner's adventure in the future and ends up getting caught in Stormy's winds. She is safely caught by Aisha however and eventually returned to the present time. Flora also jokes that her and the rest of the fairy pets existence in this timeline is a paradox.

Ginger was also present during the conference meeting regarding Earth and its event pertaining to magic. As Bloom discusses their success with the fairy pets, she urges her to show everyone her cuteness.

And when the Winx were noticing Roxy's change in mood, she seemed upset about something, they had Ginger and her friends go to Roxy's room to see if they could find out anything. Ginger distracts Roxy with the others by snuggling her while Belle reads what the fairy had written on her notebook. Afterwards, she and the others head back and relay what they had found to the Winx - Roxy likes someone but has not been able to approach him and is distressed by it.

In Perle, at the Love & Pet, Ginger was curled up in Stella's leg as she talked on the phone with Aisha. When leaving the divan, Stella carried Ginger in her arms, upstairs, and placed the poodle on her pet-bed making a signal to not make a sound to not wake up the others. Later, among the others pets, she was taken to Andros via Zoomix and participated in the summer party.