Glim is the Pixie of Fireflies and, like Piff, is still a baby.

Glim is a baby just like Piff and like Piff could not talk when she was introduced. It was revealed midway through the first movie that she had shown the ability of speech therefore suggesting that she may be older than Piff.

Glim wears a dark orange hat with two light orange puffs with a string on the end. She wears a puffy yellow striped orange jumpsuit. She has orange eyes and orange lashes. Glim has wings that look like orange fan-like bugs. 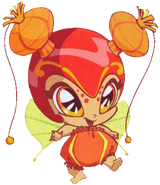 In "The Shadow Phoenix," she is rescued by Aisha.

In "The Pixies' Charge," when the pixies are fighting the Trix, Stormy gets a hold of Glim and squeezes her. A burst of orange energy goes into Stormy's eyes and it stings.

In "The Legendarium", she is seen when Pixie Village is attacked by the Gloomy Wood Trolls.