Season(s) It Takes Place In

Hallowinx is a three-part miniseries which ran in the Winx Club Comic Series to help promote a line of dolls and a video game of the same name.

What was meant to be some simple fun at a Halloween Festival on Earth for the Winx and Specialists quickly spirals out of control when they and every one of the festival-goers are suddenly attacked by a pack of werewolves! To make matters worse, the Winx find that they are mysteriously unable to transform and defend themselves, and their numbers are cut in half as Bloom, Stella and Flora remain as the only ones who managed to avoid being captured. As the three fairies look for a way to free their friends, they find themselves chosen by Gaia, becoming her latest Guardian Fairies now that the Earth had been thrown out of balance due to the planet's restored magic bringing mythical creatures from the very depths of humanity's collective fears to life.

After Flora dispatches an unstable traitor within the werewolf pack residing in Shady Hill and receives the Silver Pendant as a reward, the chosen Winx go on to face a clan of vampires; the most powerful of which wishes to rule over all mythical creatures using their Silver Pendant in conjunction with his powerful hypnotic powers, and, later, a mummified priestess who wishes to plunge the world into eternal darkness to bring her dark lord into it.

The Winx and Specialists have decided to travel to Earth to celebrate Halloween by attending and participating in a Halloween Festival at a place called Shady Hill. Just as they are about to enjoy themselves, Flora, Helia and the fairy pets cannot shake off their unease and all of the festival-goers are attacked by a sudden pack of werewolves! To make matters worse, none of the Winx can transform to defend themselves! As the only ones left, Bloom, Flora and Stella search for their friends as they try to figure out a way to set them free. During their search, they run into Feras, a man that can combat the werewolves, but Flora cannot bring herself to trust him. The three fairies are also chosen by Gaia to become her newest defenders as Earth has been thrown out of balance thanks to its restored magic bringing back mythical creatures from the depths of humanity's fears. Flora takes it upon herself to confront the werewolves in order to restore this balance.

The Club of Vampires

Now that Bloom, Stella and Flora have become Gaia's newest Guardian Fairies, they must take care of all of the legendary creatures popping into existence thanks to Earth's restored magic. During their investigation, the trio comes across a spooky café that turns out to be one run by vampires for vampires. The café owner, Lord Amaranth, desires the moon pendant that the Winx now carry, so he hypnotizes Flora into falling in love with him as he has his other hypnotized servants gang up on Bloom. Luckily, not all of the vampires agree with Amaranth's ambitions, so Bloom and Stella find an unlikely ally in a young vampire named Mina, who wishes to get rid of Amaranth to free her people. The three of them must now defeat Lord Amaranth not only to restore balance for Gaia's sake, but to rescue those trapped within the vampire lord's hypnosis.

Revenge of the Mummy

Earth's restored magic continues to awaken legendary creatures from the depths of humanity's collective fears and make them into a reality. After settling a dispute in a werewolf pack and destroying a vampire lord hungry for conquest, Gaia's latest Guardian Fairies still have one more job on their hands: to defeat an ancient Egyptian priestess who wishes to plunge the planet into eternal darkness in order to resurrect her lord. Unfortunately, Stella's powers have been severely weakened due to the sun being blocked out! Can the three of them still stop Lamya from summoning her dark lord without Stella's powers? 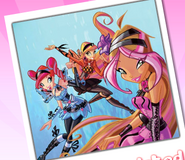 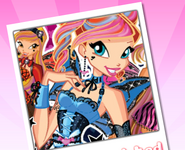 Bloom, Stella, Flora and the pets 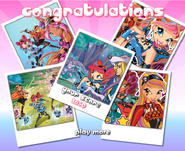 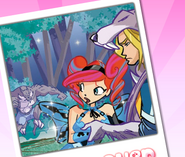 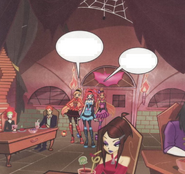 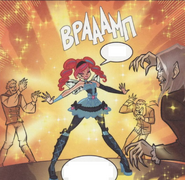 Retrieved from "https://winx.fandom.com/wiki/Hallowinx?oldid=468513"
Community content is available under CC-BY-SA unless otherwise noted.