Harmonic Attack is a Believix offensive spell used by Musa. This spell is used in one of three ways: the first being a magenta ray that goes toward the enemy, the second being a purple ball of light followed by red and purple energy that knocks down multiple enemies, and the third being huge magenta-colored sound waves. 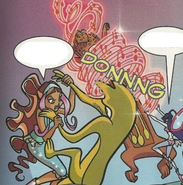