Issue 110: The Magical Valley of Linphea

Season 5
The Magical Valley of Linphea is the one-hundred and tenth issue of the Winx Club Comic Series.

It is Flora's birthday today and the young nature fairy makes her return to Linphea as she promised to spend the day with her beloved little sister, Miele. Little does Flora know is that Miele and the Winx have a special surprise waiting for her back at her favorite place, the Valley of the Shimmering Flowers. Unfortunately, Tritannus also has a surprise in store for the realm of Linphea, and it is up to the Winx to put a stop to his plans so that their friend can enjoy her special day.

Flora is hopping on a bus in order to return to Linphea for her birthday as her friends wish her well. Bloom and Stella apologize for not being able to celebrate her birthday with her but Flora does not mind as she had promised her little sister Miele that she would spend a few days with her. Plus, she is also a bit homesick. Bloom understands as them being Guardian Fairies makes them too busy to spend time with their families most of the time and Tecna urges Flora to hop on the bus before it leaves without her. Flora does so as she says goodbye to her friends.

Shortly afterwards, the Winx return to their dorm and are talking with Miele via Tecna's laptop. Miele tells the girls that the preparations are all set now that Helia has arrived and Flora does not suspect a thing. Bloom promises that they will be coming to Linphea soon as well and the Winx cheer, believing that they will be able to give Flora an unforgettable birthday.

However, in the Oceans of Linphea, Tritannus and his mutants have just arrived through the realm's Ocean Gate. Apparently, he has been searching for something known as the Roots of the Shimmering Flowers and, now that he is on Linphea, he has finally found them. He explains to his mutants that the Roots feed off of the sap of every plant on Linphea and that he plans to absorb every ounce of the Roots' lifeblood, turning the oceans into mud and killing every plant in the realm.

On the surface, Miele and Flora are walking through the Shimmering Flowers Valley. Miele notices that Flora seems to be lost in thought and Flora reveals that the Shimmering Flowers Valley is a special place that is tied to her memories. Here in the Valley is where she first met Helia. Miele claims that Flora has already told her that story up to ten times but Flora continues talking about how she and Helia would always play hide-and-seek with the giant flowers. She remembers that Helia was really good at hiding, so much so that one time she was unable to find him and cried thinking that he left her all alone. But in the end, he jumped out from his hiding place and hugged her. At the same time, Helia jumps out from behind Flora, telling her that he could never leave her alone as he hands her a rose. The two embrace as Miele claps and Helia tells Flora that he finds her to be the most beautiful flower in all of Linphea.

Meanwhile, the Winx are making their way to Linphea via the Odysea Explorer. Stella asks Tecna if she can pick up more speed so that they can make it on time to surprise Flora but Tecna thinks that they may end up arriving later than expected, notifying the girls to traces of magical pollution just below the ship. The girls run to the left side of the ship and come face to face with a large patch of dark energy swirling in a whirlpool. Remembering the oil spill in Gardenia, the girls conclude that this must be the work of Tritannus. They transform into their Sirenix and dive into the Oceans of Linphea in order to stop whatever he is planning.

In the ocean depths, the Winx see that the bollabies are all fleeing from something. Just then, a voice calls for Bloom from behind and the Winx are met with their bonded Selkies. Desiryee tells Bloom that the Roots of the Shimmering Flowers is in danger now that Tritannus is currently absorbing their lifeblood. The girls quickly jump into action and follow the trail of pollution that Tritannus always leaves behind in order to track and stop him.

At the Roots of the Shimmering Flowers, Tritannus starts to feel the aura of five fairies approaching him. He is not worried by this because he has already obtained what he was seeking: a Crystal Drop that contains the magical energy of the whole realm. The Winx vow to stop him and Tritannus sends his mutants after them. Aisha advises the Winx to not hurt the mutants as they used to be normal merfolk and encourages them to try defending themselves. She protects herself behind her Morphix Barricade and Tecna attempts to trap the mutants using her Logical Network spell. However, the mutants easily break Tecna's spell and Aisha worries that Tritannus will get away while they are too busy dealing with the mutants. Bloom claims that they need to distract the mutants and Stella comes up with a way to disoriented the mutants; blasting them with her Blinding Ray. She urges Bloom to hurry in getting the Crystal Drop back as her spell will not last long and as she gives chase, Serena, Desiryee and the other bonded Selkies lead her to where Tritannus has tried to hide himself. Bloom tries to attack Tritannus with her Bolt of Lava but she cannot reach him. Serena tries to encourage Bloom to try again but the Roots are too thick for her to land a hit. Lemmy wonders what they should do now and Bloom suggests that they try to make contact with Flora somehow. However, Flora is still preoccupied with spending her birthday with Miele and Helia, completely unaware of what is happening.

As Flora and Helia are strolling through the Shimmering Flowers Valley, Miele notices one of the flowers withering. She runs up to Flora to tell her about it and all three of them watch as all of the flowers in the valley begin to wither. Flora makes contact with one of the withering flowers and feels as if the entire realm is crying. Helia cannot believe that anyone would do something like this and Flora claims to feel great suffering coming from the ocean depths. Just then, her wrist communicator goes off and Bloom tells her that Tritannus has sucked up all of the magical sap from the Roots of the Shimmering Flowers.

Later, in the Oceans of Linphea, Tritannus is having trouble cutting through the thick vines, however, as troublesome as they are to him, they have allowed him to escape the Winx. Just as he begins to believe that he will leave the realm to wither away, the vines and roots start tangling around him. As hard as he tries, the Crystal Drop gets stolen away from him by the vines. Bloom, Serena and the other Selkies notice Tritannus being caught up in the vines and Bloom suspects that it can only mean one thing: Flora has answered her call for help! Just as she had suspected, Flora receives the Crystal Drop from the vines as she continues to strengthen them on Tritannus. Enraged, Tritannus breaks free from the vines only to be stricken by Bloom and Flora combining their Spreading Fire and Floral Whirlpool attacks. Completely weakened, Tritannus uses his trident to release magical pollution at the two girls in order to create a diversion so that he can escape. Flora and Desiryee expand their auras together in order to beat back the pollution, allowing them to see their surroundings again. Illiris congratulates the two on purifying the oceans but Flora claims that she is not done yet, as she still needs to place the Crystal Drop back in its rightful place. She does so and all of the plant-life on Linphea is thriving again.

Back at the Shimmering Flowers Valley, Helia congratulates the girls but they are not too happy since Tritannus ended up getting away. Helia embraces Flora as he tells her and the girls to not be so hard on themselves since they saved Linphea's oceans. Miele insists that they celebrate the Winx's latest victory so the girls (excluding Flora) transform into their Sirenix and throw down flower petals as Flora, Helia and Miele continue to frolic through the valley. 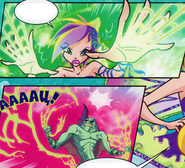 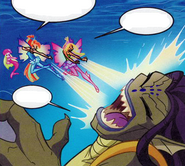 Spreading Fire and Floral Whirlpool United.
Add a photo to this gallery

Retrieved from "https://winx.fandom.com/wiki/Issue_110:_The_Magical_Valley_of_Linphea?oldid=515508"
Community content is available under CC-BY-SA unless otherwise noted.