Season 5
The Trix's Trap is the one-hundred and twelfth issue of the Winx Club Comic Series.

The Winx are giving a tour through Gardenia's new marine park to a family of four, as the parents desperately wanted to see how well the Winx have been protecting the oasis. Everyone is enjoying themselves and all is well until everybody's favorite trio of witches arrive to cause trouble. Things rapidly take a turn for the worst once it seems like the Trix have Bloom cornered and the ultimatum. Bloom must give up the Dragon's Flame if she wishes to save everyone.

It is a beautiful sunny day and the Winx are showing a family of four around Gardenia's new marine park aboard the Odysea Explorer. The little boy gets excited at the sight of the dolphins and the man thanks Bloom for letting them see the oasis that she and the Winx have protected. Bloom tells Mirco and his wife, Bella, that there is no need to thank them as every nature lover deserves a treat now and then. Mirco's son then points to two creatures that are swimming alongside the ship and asks if they are fish. Flora tells the boy that the creatures are called pilot whales and clarifies that pilot whales are not fish but cetaceans. She then explains that cetaceans are mammals that live in the ocean but have to resurface in order to breathe and the boy, named Lucky, realizes that they are like dolphins. Lucky asks if the pilot whales can do somersaults and jump just like dolphins can and Flora confirms that they can, as one of the pilot whales has lunged towards the side of the ship to let Lucky pet it.

Tecna notifies Aisha that it is her turn now and Aisha magically changes into a bathing suit. She leaps off of the side of the Odysea Explorer, dives into the ocean, makes a ball out of her Morphix powers, and begins to play with the pilot whales. Bella then asks the Winx if dugongs also live in Gardenia's Marine Park and Flora confirms this, further explaining that dugongs are a very rare sight thanks to pollution, but they should be able to see some if they are lucky. In that moment, Mirco catches sight of the dugongs and starts taking some pictures. Lucky tries to get his big sister, Milla, to see how funny the dugongs are, but Milla is busy on her phone. Stella comes by to ask if Milla is getting bored and Milla claims that she could have gone out shopping with her friends but got stuck here instead. She shows Stella that there is a sale going on at a store called Lady Fashion and Stella notices some glittering headbands that she would have loved to buy. However, since Milla is out at sea now, Stella encourages for her to try and enjoy herself rather than sulk all day. Milla insists that she does not want to have a good time and Stella thinks that a wardrobe change is in order. Using her magic, Stella changes Milla into a bathing suit and gently lowers her near the dugongs. Milla is reluctant at first but after sitting atop a dugong for a moment, she sees how beautiful they are and begins to enjoy herself. Little do they all know is that they are being observed by a familiar trio of witches.

From the skies above the ship, the Trix spy on the Winx and cannot stand how everybody loves them now. Lucky for them, they are invisible, which gives them the perfect opportunity to launch a sneak attack.

Back with the Winx and their guests, Stella asks Milla if she is enjoying her little adventure. Milla admits that she is having fun but thinks that the black spot in the ocean is not a pretty sight. Stella frantically asks Flora what the black substance could be and Mirco starts to believe that it is oil coming from the Odysea Explorer. He accuses the girls of polluting despite preaching to everyone else about recycling, but Bloom insists that the black substance is not coming from them. Tecna rushes over to explain that the Odysea Explorer runs on the magical energy of the planet, not oil, but Mirco is not convinced. Aisha advises Milla to stay with the dugongs as she takes a look under the ship. Once underwater, Aisha swims underneath the ship, finds nothing that could be spewing out oil and swims back to the surface. Bloom asks if Aisha could see anything and Aisha claims that she could not as there is some sort of fog obstructing her vision. At the same time, the Trix combine their powers to stir up trouble and start up Icy's plan.

The black spot begins to spread and Milla notifies the Winx that the dugongs are starting to get nervous. Flora realizes that the dugongs could dive at any moment as they are becoming worried over their calves and Bloom urges for Aisha to get Milla back on the ship. However, before Aisha can reach Milla, the dugongs lunges forward and swim off with Milla still on one of them. Not liking where things are headed, Bloom urges for the girls to transform. The six fairies promptly go into their Sirenix forms and Bloom relays her plan to the rest of the girls: Aisha, Stella and Musa will attempt to rescue Milla and protect the dugongs as Flora and Tecna come with her.

Stella tells Musa and Aisha that she will try to use that will stop the dugongs before they dive. The Trix charge after the group as Icy plans to turn Stella's defensive spell into a destructive one in order to teach her a lesson. At the moment Stella releases her Golden Disc, Icy casts her Ice Blade spell, which causes Stella's Golden Disc to redirect and blast a nearby rock. Aisha asks what Stella is trying to do as Musa urges for Milla to let go of the dugongs. As boulders rain down from the blast, the dugongs dive underwater, dragging Milla with them. Stella insists that she did not know what happened as her Golden Disc was not supposed to act in such a way. From the ship, Mirco, Bella and Luck begin to worry as Milla is not resurfacing. Musa orders for Aisha and Stella to dive into the waters in order to rescue Milla. Now that the Winx have been separated, Icy orders for her sisters to transform into Dark Sirenix Witches alongside her. The three of them then transform and reveal themselves.

Underwater, Musa, Stella and Aisha see that the dugongs have been buried under the rubble and that Milla is essentially stranded because of this. Since Milla and the dugongs are doomed to drown without air, the three of them created an Air Bubble around them in order to allow them to breathe. As the three fairies approach Milla, Stella asks if she is okay. Milla confirms that she is alright but just scared and Stella encourages for Milla to stay brave as they will find a way to free her and the dugongs. Milla then asks who an incoming trio of women are as they quickly approach from behind Stella, but before the three fairies can defend themselves, the Trix blast them down with a joint-Dark Lightning Convergence.

Back above water, Flora, Bloom and Tecna's spells are proving to be ineffective against the spreading oil. Mirco begins to lose faith in the Winx as their "famous magic" is not working on a simple oil spill. Bloom tries to tell Mirco that they can only dispel the oil with a Sirenix Convergence, but it cannot be done as half of their group is no longer with them. Mirco claims that he was wrong to trust the Winx and dives into the water to save his daughter. Bloom dives in after him as she tells Flora and Tecna that she can take care of it.

Once underwater, Bloom comes to see that Stella, Aisha, and Musa have been knocked out cold. She wonders what may have happened and frantically swims off to find Mirco. Just as she finds Mirco, she is met by the Trix, who have just trapped the man in a sphere of ice. Bloom demands that the witches release Mirco but Icy jokes around about Bloom giving them orders. She agrees to Bloom's demands but only if they orchestrate a small exchange: releasing Mirco for Bloom's Dragon's Flame. Bloom insists that she cannot do such a thing and Icy claims that Mirco looks better in his new Ice Sphere, only to end up popping it and releasing all of the air inside. Milla pleads for Bloom to save her dad and Bloom notices that the dugongs are also trying to tell her something. She manages to learn that the dugongs are mad at the Trix and wish to help fight. Mirco begins to struggle as Stormy taunts Bloom about how she is running out of time and Icy adds that once he drowns, they will be going after Milla next.

Bloom ultimately agrees to the Trix's demands and gives her Dragon's Flame to them. Icy reaches out to grab the Flame, but Bloom claims that it is too early to claim victory and transforms the Flame into an explosion using her Spreading Fire spell. The explosion blows the Trix away and frees the dugongs from the rubble! The dugongs immediately go after the Trix as Bloom urges for Milla to rescue her father. Milla manages to pull Mirco out of the Ice Sphere and swims up to the surface.

Now that the witches have no hostages, Bloom prepares to fight. Icy tells Bloom not to get too cocky as it is still three against one, but Bloom asks if she is so sure about that. Icy then turns around to find that Tecna and Flora have managed to wake up the three fallen fairies with a healing convergence. Bloom is relieved that her friends have come to her aid in the nick of time and Tecna claims that they came running once they saw Mirco and Milla resurface. Now that it is six against three, things are starting to look bad for the infamous trio. The Trix decide to retreat for now but Icy warns the Winx that they will not be so lucky the next time they face off. Now that the three witches are out of their hair, Bloom urges for the Winx to return to the surface as there is one thing they still have to do. The six fairies do just that and cast a Sirenix Convergence on the waters of Gardenia's Marine Park to dispel the magical oil left by the Trix.

As the girls land back onto the Odysea Explorer, Mirco apologizes for doubting them so easily. Bloom assures Mirco that he does not need to worry as he could never have known that the Trix ended up setting a trap for them. Stella urges for everyone to take a group photo instead of brooding around and Lucky agrees, but is quickly confused by how they will take a picture if everyone is in the shot. Stella tells Lucky that the camera will do it on its own thanks to magic and the ten of them gather for group photo to help the family remember their day out with the Winx! 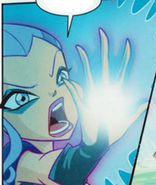 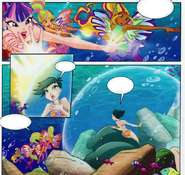 All together; let's create an air bubble! 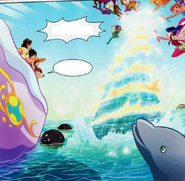 Sirenix Convergence!
Add a photo to this gallery

Retrieved from "https://winx.fandom.com/wiki/Issue_112:_The_Trix%27s_Trap?oldid=515510"
Community content is available under CC-BY-SA unless otherwise noted.