Magical Costumes is the one-hundred and thirteenth issue of the Winx Club Comic Series.

While perusing through the Gardenia Plaza, the Winx find themselves in the midst of some sort of convention as just about everyone is decked out in cosplay. They are quickly swarmed by a group of fans each in their own costumes designed to be almost identical to their Sirenix forms and, to everyone's surprise, these girls can use their Sirenix powers. The Winx quickly learn that they got their costumes from a place called Judy's Bazaar and all costumes from there give the wearer the abilities of the character they are dressed as. To make sure that no one abuses such abilities, the Winx seek out the owner of the Bazaar, a young fairy named Judy, to get her to recall her costumes. 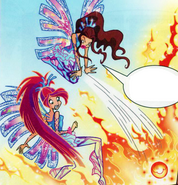 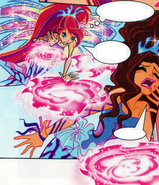 Bloom and Judy's Convergence.
Add a photo to this gallery

Retrieved from "https://winx.fandom.com/wiki/Issue_113:_Magical_Costumes?oldid=477106"
Community content is available under CC-BY-SA unless otherwise noted.