Fairy Talent is the one-hundred and fourteenth issue of the Winx Club Comic Series.

The Festival of Magic is being held at Alfea this year, where a young girl named Romina gets to meet her most favorite fairy and idol, Bloom. Surprised by how much promises Romina shows, Bloom spends the whole day taking her around the Festival. That is until they are interrupted by a crimson cloud that attacks the festival-goers! After Bloom takes a heavy hit from the cloud, it is up to Romina to step in and help the remaining Winx Fairies defeat it.

Alfea is holding a Festival of Magic, where just about everyone in Magix has come to see. Three girls are roaming the festival grounds until one of them wants to know where Bloom is. One of the other girls tells their friend to check the Linphea Booth, and the blue-haired girl darts off. Her friends try to warn her but she bumps into another fairy, causing her to drop her dragon eggs.

The blue-haired girl reaches her arm out to the eggs and manages to stop them from falling with a single shout. The fairy asks how she was able to do so but the blue-haired girl does not have any idea herself; that the only thing she could think about was not letting the eggs break. She further claims that this has been happening often, that whatever she thinks up ends up becoming real. She is then greeted by Headmistress Faragonda, who approaches the two girls with Bloom and Flora by her side.

The blue-haired girl leaps into Bloom's arms as Faragonda introduces her as Romina. She claims that Romina is a young fairy full of talent and, as the four of them start walking, Romina sees a baby dragon sneeze on a little boy's lollipop, causing it to catch on fire. The boy starts to cry and Romina uses a spell that conjures up pink butterflies around the boy to cheer him up. As Romina takes pride in her spell, Faragonda urges Bloom to teach the young fairy a few things since she is her favorite fairy, but Bloom is too busy marveling at Romina being capable of casting a third-level comfort spell with such ease. She then invites Romina to come see a magical fashion show with them, to which Romina happily accepts. As they make their way to this fashion show, Romina tells Bloom that she has studied all of her spells. Bloom praises Romina on her diligence and tells her that a fairy must have control over her emotions in addition to casting spells.

Soon enough, Bloom and Romina make it to a stage where the magic fashion show is about to be held. As the two regroup with the rest of the Winx, Bloom explains to Romina that controlling ones fear and anger is important for a fairy, but Stella does not always succeed in that regard.

Speaking of Stella, she is scrambling through a chest of clothes and accessories for something she misplaced. Bloom tells Stella that she is setting a bad example but Stella claims that it is not even her fault because the magic shoes in her collection never stay still. Stella finds her shows soon enough and brags about how the magic shoes will make it so her models can walk as delicately as a butterfly. Though, suddenly, a strong gust of wind starts to blow through the festival. Flora fears that they may risk being picked up and thrown by the winds and Stella is surprised that there is such a strong wind at all. The winds begin to pick up more and more as everything is being lifted from the ground. Faragonda suspects that this is not a natural phenomenon and a large shadow starts to loom over everyone in the area. Everyone looks to the sky and finds that a dark red cloud is approaching.

As it wreaks havoc, the Winx identify the cloud as one made out of pure dark energy and go into their Sirenix forms to put a stop to it. Stella attacks the dark energy cloud with her Light Diamond, but her spell just shoots through the cloud without stopping it. Tendrils shoot out from the cloud as Bloom tries to get Stella out of the way. As they try to flee from the cloud, one of the tendrils grabs Bloom and shocks her until she is forced out of her Sirenix. Romina rushes in to catch Bloom with her magic and successfully created a pink shield around the fallen fire fairy. Faragonda urges for Romina to let Bloom down gently as she rushes to Bloom's aid.

Bloom starts to come to and asks what has just happened to her. Faragonda tasks Romina with protecting Bloom and warns the rest of the Winx that the dark energy cloud is capable of sucking them dry of all their magic. Musa relays Faragonda's warning, calling the cloud a Vampire Cloud, and the five remaining Winx try to beat it back in order to give everyone else enough time to escape. However, the Vampire Cloud manages to suck the magic from a few of the panicking festival-goers before they are able to escape in time.

The Winx's attacks begin to irritate the Vampire Cloud more than it already was as the panicking festival-goers are eased into the school building by Palladium and Griselda. Bloom manages to shut the door before the cloud can get inside and it seems as if everyone else managed to get inside safely as well. Once it is quiet enough, Faragonda declares that she will need the help of all of the faculty and fairies in order to protect the school. Romina insists that she will go outside to help the remaining Winx fend off the cloud but Bloom claims that she will need to save her energy. The Vampire Cloud tries to creep through the door and Romina acts quick enough to scare it back outside with a magical blast. Bloom is amazed with how Romina had just saved her life and Romina insists that she would do anything for Bloom. At the same time, Faragonda, the faculty members, fairies and some of the booth owners combine their powers in an attempt to protect the building.

The rest of the Winx notice this from outside and Musa urges them to fly above the cloud to try attacking it another way. As the five fairies fly above the cloud, Tecna urges for them to act fast, as the protective spell may not last long, but Stella does not know what they can try due to the cloud's ability to feed off of their magic. In that moment, the cloud sends a piece of itself after the remaining Winx as the rest of it continues to attack the building.

Back inside, Faragonda realizes that the cloud came to the festival in search of magic to feed on and Bloom insists that they must defeat the cloud. Faragonda claims that the only way to defeat the Vampire Cloud is with a powerful Convergence, but Bloom explains that the Winx cannot cast one without her because they can only do so when all six of them are present. Bloom suddenly comes up with the plan of letting Romina act in her place for the convergence, as she has great faith in the young fairy's capabilities. However, Romina is not sure that she can do so and, just then, the Vampire Cloud breaks through one of the windows! Using her quick-thinking, Romina attacks the tendril without hesitation and manages to beat the tendril back. Now certain that she can act in Bloom's place, Romina asks Faragonda about what she needs to do. Faragonda lends Romina more magical energy, which throws the young fairy into her fairy form. Bloom assures Romina that nothing can stop her if she can control her anger and fear and Romina promises to do just that.

The young fairy zips out of the building and the five Winx are quick to notice. Stella is confused as to why they would let such a young girl out of a safe place, leaving herself wide open for the cloud's oncoming attack. Flora tries to warn her but Romina manages to beat back the tendril before Stella can be harmed in any way. Stella takes back what she said and welcomes Romina and Romina thanks her. She then reports to the five fairies that Faragonda claims that they need to cast a convergence spell on the cloud and Aisha is certain that they can do so now that Romina is with them as their sixth fairy. Flora advises Romina to copy their movements by watching them and, soon enough, all six of them manage to cast a powerful Sirenix Convergence. Aisha wonders if their convergence is able to damage the Vampire Cloud and Romina advises Stella to control her fear. Stella wonders why she has to be told this and insists that she is not afraid of anything.

From inside, light breaks through the shattered windows and Faragonda suspects that they were successful in defeating the cloud. Bloom can feel her magic returning to her and everyone else whose magic was sucked out rejoices over their regained powers.

Everyone rushes outside as they cheer over the Winx saving their lives. Stella advises Romina to watch her as she is about to partake in her favorite part of being a heroine: offering autographs to adoring fans.

Bloom regroups with the girls, where Romina asks Bloom if there will ever be a day where she can be just like Stella, though, Bloom advises for Romina to rethink such a wish as everyone else laughs. 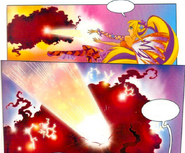 Sirenix Convergence!
Add a photo to this gallery

Retrieved from "https://winx.fandom.com/wiki/Issue_114:_Fairy_Talent?oldid=477105"
Community content is available under CC-BY-SA unless otherwise noted.