The Enchanted Forest is the one-hundred and twentieth issue of the Winx Club Comic Series.

Flora is giving an educational tour around Gardenia Park to the local children and it seems to be a rousing success, especially after presenting the Park's ginkgo tree. However, something strange sparks from within the tree after Flora touches it but she has no time to address it as she and the Winx need to prepare for Aisha's upcoming ballet show titled as The Enchanted Forest. It later turns out that a humanoid spirit was awoken by Flora's magic touch but she is lost, confused, and possesses erratic ancient magic. When the Spirit of the Ginkgo Tree wanders throughout the city looking for help, the Winx try to answer her call but only make things worse. They then try their best to relocate the Ginkgo Spirit and subdue her before she causes any more havoc but, unfortunately, the Ginkgo Spirit finds another helping hand in the form of three witches always looking to stir up trouble.

It is a warm and sunny day in the city of Gardenia, where Flora is showing a group of children to what she considers to be a special tree: the ginkgo biloba. As the children look wondrously at the tree, Flora explains how a ginkgo tree can live for thousands of years and grow to be taller than forty meters. One of the kids compares the tree to a skyscraper as Flora continues to explain that ginkgo trees are amongst the oldest species of plants on the planet, as they first appeared over 250 million years ago, when the dinosaurs still roamed. She then claims that the ginkgo trees represent the power of nature and that, if they respect it, then they will always be able to overcome the challenges of the future. She goes on to talk about the various disasters that ginkgo trees have survived like rampant volcanic eruptions, meteors and even the Ice Age, and the crowd applauds the young nature fairy for being so informative. Before the kids leave, Flora praises them on being such a fantastic class and signs each of their notebooks.

She then turns back to the ginkgo tree and places her hand on it as she tells the tree that it was such a hit with the kids, but feels a sudden magical spark swirl around it. As she tries to figure out what that spark was, the rest of the Winx approach Flora, with Stella telling her that Aisha has some super fantastic news that she must hear. Aisha reveals her good news to be that the director of the Princesses' Theatre had asked her to arrange a dance show for tonight and Stella expresses her excitement for their chance to "make their debut in the world of ballet." As the Winx leave Gardenia Park, Aisha tells Flora that she has been thinking of basing their choreography on the wonders of nature and asks if she could give her a hand. Flora naturally agrees with helping her friend as Aisha goes on to pitch the title of the show, The Enchanted Forest, and Stella adds that they have already posted posters of them on all over the city. When the girls reach the gates of the park, Aisha asks if Stella put the title of the show on the posters and Stella confirms that she has, but their ballet dresses will be much more important, especially hers, which causes the Winx to laugh.

Later that day at sunset, a mysterious girl emerges from the depths of the ginkgo tree with no idea of who she is, what birds are and what is even going on.

At nightfall, the Winx continue to practice for their upcoming show but are having a bit of trouble following Aisha's lead. Just as Stella straightens her form out, she hears the sounds of a thunderstorm from behind her. The girls all turn to their balcony as the storm proves to be a strange one due to lightning shooting off from the center of the city while the sky remains clear. Just then, Bloom gets a call from her mother, who informs her of something dangerous happening. Bloom then notifies the Winx of the emergency and the six fairies spring into action by going into their Bloomix forms and flying off into the city to investigate.

As they approach the center of the city, Stella notices a person at the center of the magical storm: a young girl dressed in leaves. The girl walks around the city, wanting to know why people fear her as the storm continue to rampage her surroundings. Flora quickly identifies the girl as a tree spirit and comments on how she thought they went extinct. She then realizes that she may have awoken the tree spirit when she caressed the ginkgo tree back in Gardenia Park and Bloom suggests that they try to talk to the Ginkgo Spirit as she does not look evil.

Bloom lands a few feet behind the Ginkgo Spirit, telling her to calm down and letting her know that they are not here to hurt her. She then introduces herself formally and asks the Spirit to tell her who she is, but the Ginkgo Spirit tells Bloom to ask her friend as she should know all about her. Flora then lands by Bloom's side and reveals to the Ginkgo Spirit that she is the spirit of a ginkgo tree. The Spirit cannot believe what she is being told as she was just born that day and retaliates by shooting lightning at the two fairies.

Deeming the Winx to be a group of liars, the Ginkgo Spirit leaps on top of a building to get away. Bloom tries to follow her but the Ginkgo Spirit shoots another lightning bolt at her and flees while she is down. Tecna and Musa swoop in to catch Bloom as she assures her friends that she is alright.

As the girls watch on as the Ginkgo Spirit leaps from treetop to treetop, Flora insists that they need to help her as she is just scared due to being in a world she does not understand. Stella agrees but points out how powerful she is and Bloom proclaims that they need to find her again before someone gets hurt.

Meanwhile, the Ginkgo Spirit sits atop a tree in the middle of a square, desperately questioning why she is here, why she is all alone, where her sisters are and why they will not talk to her. However, her wallowing is cute short by Icy approaching her from behind, claiming to be the Spirit's sister.

Darcy and Stormy quickly join their eldest sister as all three of them tell the Ginkgo Spirit that they witnessed her power and that they like strong women. Stormy approaches the Spirit claiming that they share many things in common as Darcy insists that they are also scared. The two of them swirl around the Spirit, urging for her to "pay the humans back" as Icy tells her that she is right to be angry at the humans as they are notorious for mistreating tree spirits like them and are worth nothing.

In another part of the city, the Winx fly around, still trying to locate the Ginkgo Spirit. Bloom begins to sense a magical anomaly but cannot pinpoint its exact location as it seems to be coming from every direction. Just then, Aisha spots something which turns out to be a large spire made out of a storm coming from nearby!

As the Winx approach the spire of storms, they catch sight of the Ginkgo Spirit alongside the Trix as they terrorize the locals! Darcy tries to get the Ginkgo Spirit to join in on their fun but she is interrupted by Bloom, who lowers herself closer to the ground in order to tell the Spirit that the Trix are not her real allies. Stormy quickly loses her patience and launches a whirlwind that picks up many items at some of the bystanders. Acting fast, Aisha uses her Wave Protection spell to protect the bystanders and the Trix use it as "proof" to show that the Winx cannot be friends of the Ginkgo Spirit's if they are friends with humans. Stormy then commands the Ginkgo Spirit to attack Bloom and she does just that by launching a bundle of vines at the Keeper of the Dragon's Flame! Luckily, Stella is able to block the vines with her Total Eclipse as Musa retaliates by sending her Endless Echo at the Spirit and the Trix, rendering them temporarily immobilized. Bloom then praises Musa for stopping the Spirit's attack without hurting her, but Stella points out how they will be stuck defending themselves if she were to attack them again. That is when Bloom gets the idea to flee the battle scene and allow the Trix and the Spirit to give chase so that they can lead them into Gardenia Park and hopefully have the Spirit come to her senses.

And so, under Bloom's orders, the Winx fly away and the Trix and the Ginkgo Spirit give chase as planned. As they approach Gardenia Park, Bloom tells the Ginkgo Spirit to listen to their words if she does not wish to listen to hers and, when the Spirit passes over one of the trees, she begins to sense something that stops her in her tracks.

The Trix quickly regroup as Icy launches a blast of ice at the Winx before the Ginkgo Spirit can turn on them. The Winx all manage to dodge the blast but Flora notices that it is now headed for the tallest tree within the area and flies towards it to protect it, taking the brunt of the blast. The Ginkgo Spirit quickly hops over to Flora, touched by how she risked her life to save one of her sisters, and she quickly directs her anger on the Trix for putting her sister in danger, driving off the trio of witches with a powerful energy blast.

With the Trix gone, the Ginkgo Spirit apologizes for her actions and thanks them for making it possible for her to hear the voices of her sisters. However, the Spirit is still forlorn about the ordeal, as she now knows that her sisters are all trapped within their tree bodies, and greatly wishes to bring them out. In response to the Ginkgo Spirit's wish, Bloom promises that they will be able to release the spirits of the other trees together.

In fact, just a few days later, the Winx perform their Enchanted Forest ballet at the Princesses' Theatre, where the Ginkgo Spirit descends from long red ribbon to spread some of her magic at the end. As the audience cheers and the Winx take a bow, Bloom explains to the Ginkgo Spirit that the love of the people they get helps to strengthen their magic and asks if she can feel it. The Ginkgo Spirit confirms that she can and that Bloom's plan is working perfectly. The Spirit's magic then takes the form of a swarm of fireflies as she exclaims that her sisters are awakening thanks to the love of the people and the Winx's magic, meaning that she will no longer be alone in the world.

As the Winx take in more of the applause, Stella congratulates the Spirit and proposes that they celebrate her coming reunion with her sisters with a party under the Spirit's tree branches. But first, they must let the fireflies return ahead of them as lighting for a party is the most important part. 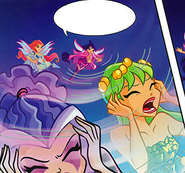 Infinite Echo!
Add a photo to this gallery

Retrieved from "https://winx.fandom.com/wiki/Issue_120:_The_Enchanted_Forest?oldid=479553"
Community content is available under CC-BY-SA unless otherwise noted.