Issue 124: Attack of the Centaurs

Season 6
Attack of the Centaurs is the one-hundred and twenty-fourth issue of the Winx Club Comic Series.

The Winx, Specialists, Paladins and Daphne are enjoying a day at the Gardenia Horse Fair, but Daphne is worried that her relationship with Thoren is not going so well. Meanwhile, Selina uses the Legendarium to call forth an army of Centaurs to ruin the Winx's day as she finds it unbearable how Bloom has become an ultra-famous star while she remains unmentioned and forgotten. Selina's plan rapidly begins to backfire, though, as the Centaurs start arguing amongst themselves rather than go after the Winx.

The Winx, Specialists, Paladins and Daphne are enjoying a nice day at the Gardenia Horse Fair, but Bloom notices that her sister seems to be worried over something. She asks if everything is alright between her and Thoren and Daphne admits to not being so sure herself. She claims that while Thoren is very nice and courteous to her, she still cannot figure him out sometimes, and so Bloom tries to ease her sister of her worries by insisting that Thoren does love her with all his heart. She is certain that his actions and behavior around Daphne is proof enough that he loves being with her and that some things just cannot be expressed through words alone. The two of them then approach one of the horse pens, where Sky introduces them to Breeze, Gardenia's champion race horse. Daphne immediately takes a liking to Breeze as Thoren comments on how he should not be so surprised that Breeze returns her feelings and explains that no one can resist her when she does not get it at first.

That is when the rest of the Winx, Specialists and Paladins arrive with Stella announcing their arrival to the two "beautiful couples in love." This also alerts the surrounding crowd to the Winx's presence and they begin cheering and swarming the fairies for autographs, which they happily oblige. Little do they know is that Selina, Bloom's old friend from childhood, is spitefully watching them enjoy their fame from Cloud Tower with the Trix.

Agitated with how Bloom once again garners all the praise despite the both of them being from Gardenia, Selina and the Trix plot to ruin the Winx's fun. Icy claims that while the Winx have numbers, they can have an army any time they would like, but Darcy is a bit hesitant due to the Specialists and Paladins being by their side this time. That is when Selina takes it upon herself to conjure up an army of Centaurs from the Legendarium since they seem so fond of horses, and sends them out to Gardenia to ravage the fair. Unfortunately, their plan immediately begins to backfire once the Centaurs begin bickering amongst themselves over how no one takes them seriously. Wanting to get back at the fair-goers for mistaking them to be "ponies" and gimmicks, the Centaurs begin terrorizing them and the Winx are quick to take notice.

Recognizing the Centaurs as being creatures from the Legendarium, the Winx promptly go into their Bloomix to protect the innocent fair-goers. Before flying off, Bloom tasks Sky with getting the Specialists and Paladins on standby and tells Daphne that there are still some fair-goers who are unaware as to what is going on. Daphne quickly catches on to Bloom's plan and lets her know that she will let them know to go somewhere safe.

Springing into action, Bloom advises for the girls to focus on protecting the panicked fair-goers and promptly uses her Red Dragon Orb to shield a part of the crowd. The Centaurs overhear Bloom shouting her spell's name, realize that they are their objective and try to shoot them out of the sky with beams of light from their weapons. Aisha sees the Centaurs aiming their attacks at Stella, who is currently occupied with shielding another crowd of fair-goers with her Total Eclipse, so she swoops in front of Stella to protect her with her Protection Wave spell.

The Specialists and Paladins see this and realize that the Winx will not be able to win without their help, as they would be unable to properly defend themselves if they make protecting the fair-goers their main priority. Brandon urges for the guys to take action and so each one of them grabs hold of their magical weapons and gets ready to do battle.

They immediately charge into battle upon suiting up and attack the Centaurs with their weapons, with Sky and Helia starting up the counterattack with their Moon Khukuri and Rose Thorn Bracelets respectively. Musa and Tecna take notice of this and tell Bloom that the boys need their help as there are too many Centaurs for them to fight, however, Bloom does not know how they will be able to do so as they still need to make sure that the fair-goers are safe. That is when Daphne offers to warn everyone on her own to give the Winx a chance to properly combat the Centaurs. Bloom, believing in her big sister, takes Daphne up on her offer and flies off with the Winx to lead their counterattack. She, Stella and Flora then attack the Centaurs with the combined might of their Volcanic Attack, Light Spectrum and Chlorophyll Bolt spells.

The Centaurs launch a bigger barrage of light beams at the Winx and response, but Musa shields herself, Bloom and Stella from the beams as Tecna, Aisha and Flora dodge them by flying off somewhere else. As the three of them overlook the army of Centaurs, Stella tries to figure out just how many Centaurs they are dealing with as Bloom realizes that Selina has launched such a widescale attack with seemingly no end in sight as only more Centaurs continue to appear, adding onto the already sheer number of Centaurs.

In a place far from the fairgrounds, Daphne is assuring the crowd that they will be safe from the fight now. A little girl asks if Daphne can stay with them but Daphne claims that she must return to her friends to aid in the fight. That is when a young man offers up Breeze to Daphne, believing that she will get there much faster, and Daphne thanks the young man, promising to bring Breeze back to him safe and sound.

Back on the fairgrounds-turned-battlefield, Musa is shot down by one of the light beams and Stella barely manages to catch her. Stella insists that they need to send the Centaurs back inside the Legendarium quickly and Bloom begins to think that a strong enough Convergence spell might work. She then asks Tecna to provide a map of the area to find a place where they can gather the Centaurs together to trap them, and Tecna finds a circular rock formation nearby that they can use. That is when Daphne comes by on Breeze and volunteers to provoke the Centaurs into following her to the rock formation, as Centaurs are rather touchy creatures. Bloom advises that Daphne be careful and tells Sky and Thoren that she and the Winx will be needing their help to lay down the trap, as she cannot shake the feeling that Selina and the Trix may be spying on them through their Magic Eye. Sky confirms that they will await Bloom's orders as Bloom cheers Daphne on, seeing her and Breeze head directly for the Centaur army.

Just as three of the Centaurs surround Aisha and Flora, Daphne calls out to them by calling them "rocking horses" and bets that Breeze is faster than all of them put together. Angered by her words, the Centaurs divert all their attention onto Daphne and pursue her. Naturally, this makes Selina furious back at Cloud Tower, as her plan to crush the Winx is going up in smoke.

The Trix also take notice of how the Winx seem to be forming a trap due to how the Specialists and Paladins are hiding and decide to send a little "greeting" to the Crown Princess of Domino by launching a small Convergence through their Magic Eye.

Their attack reaches Breeze and Daphne instantly, knocking down Breeze and causing Daphne to fall off of Breeze's back, leaving her vulnerable to the incoming Centaurs. Compelled to protect her, Thoren leaps from his hiding spot and uses his Seismic Hammer to strike the ground, triggering an earthquake that tears open the ground just between him and the Centaurs. With the Centaurs unable to escape, the Winx now have their chance to strike, but before doing so, Stella decides to taunt Selina and the Trix by asking if they liked their "little trick."

Realizing what the WInx's plan really was, Icy explains to Selina and her sisters that the Specialists only served as a distraction meant to provoke them; the real trap was Thoren the whole time. After hearing this, Selina shouts for them to get the Centaurs out of there, but Darcy reveals that it is already too late, as the Winx have already unleashed their Bloomix Convergence into the trapped army of Centaurs, causing them to be forcibly flung back into the Legendarium.

With this entire ordeal behind them, Thoren helps Daphne to her feet and remarks on how brave she was, calling her his princess in the process. Daphne adds in that Thoren was the one who saved her life, calling him her Paladin, and Breeze juts in between the two to get some praise of her own. That is when Bloom and Stella descend with Bloom insisting that everyone did great and fought like one big team. Stella audibly wonders how they will ever pick up where they left off before the Centaurs attacked, only to end up magically conjuring up a shower of autographs for everyone at the Horse Fair.

Centaurs, I invoke thee! Go to Earth! Unleash your brute strength against the Winx and their friends! 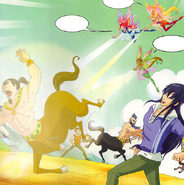 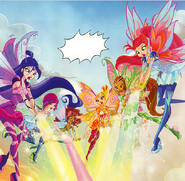 Bloomix Convergence!!
Add a photo to this gallery

Retrieved from "https://winx.fandom.com/wiki/Issue_124:_Attack_of_the_Centaurs?oldid=515522"
Community content is available under CC-BY-SA unless otherwise noted.