Issue 125: The Kingdom of the Dark Elves

The Kingdom of the Dark Elves is the one-hundred and twenty-fifth issue of the Winx Club Comic Series.

While conducting more advanced training with the Winx, Professor Palladium decides to end it all off by showing them a simulation of his home: The Elven Kingdom. However, something comes over Palladium when he leads the girls into his old house, as they all find a woman standing in the middle of the main room. This causes Palladium to shut down the simulation and he reveals to them that the woman was Athris, his greatest love who he has not seen in years. Though he does not believe it, he tells the Winx of how she may have been kidnapped by Dark Elves, a mythical race of Elves that hail from the Underworld and come to the surface to take Surface Elves away at night. Wishing to help Palladium reunite with his lost love, the Winx take it upon themselves to travel into the Legendarium World to bring Athris back from captivity, only to find a nasty surprise awaiting them.

With their advanced lessons almost complete, Professor Palladium decides to end it all by showing the Winx a virtual replication of his birthplace: the Elven Kingdom.

As he shows them around, the Winx keep finding themselves mesmerized by the natural beauty of the land while Palladium explains that elves live in close connection with nature. Spotting his old house in the distance, Palladium decides to show it to the girls, however, when he opens up his front doors, they all find a blonde woman standing in the middle of the room. Completely taken by surprise, all Palladium can say under his breath is the name "Athris" before Bloom shows concern for him and asks who the woman is. Snapping out of it, Palladium insists that the woman is "no one in particular" and shuts down the simulation as he dismisses her image to be an error in the Simulation Room's databases.

He tries to rush out of the room claiming that he needs to recalibrate the Room's software, but Flora stops him and tells him of their shared worries while reminding him that he completely froze up at the sight of the woman. Feeling like he cannot even try to hide it any longer, Palladium confesses that the woman who showed up in his old house was Athris, his greatest love. Aisha asks Palladium of what happened to Athris and Palladium explains that she disappeared one day and he had not heard from her since then. Bloom then asks how she disappeared but Palladium reveals that no one knows how and, though it may seem absurd, there were traces found of Dark Elves the night of her disappearance. Now confused, Tecna asks if Dark Elves are purely fictional creatures and Palladium confirms this, however, according to the legend passed down by many elves, the Dark Elves come up to the surface every night from the Underworld to kidnap surface elves and drag them back with them. Palladium then uses the Simulation Room to create images of Dark Elves to show the Winx how they have been described and Stella finds herself enamored by their beautiful features, which prompts Palladium to warn Stella not to be fooled as Dark Elves are notorious for their cruel tendencies.

Just then, Musa gets the idea for her and the Winx to enter the Legendarium World and Bloom agrees. She then promises Palladium that they will enter the Legendarium World to rescue Athris from the Dark Elves. Overcome with joy, Palladium cannot find the words to thank the Winx, so he hands them a pendant which happens to be half of one in Athris' possession and claims that she will be able to trust them when they show it to her. Once Bloom is given the spiral pendant, the Winx summon their Mythix Wands and enter the Kingdom of the Dark Elves in the Legendarium as they transform into their Mythix forms.

Now in the domain of the Dark Elves, the Winx find themselves creeped out by their new surroundings. Bloom tasks Stella with illuminating the area with a ball of light but, just as she does so, Tecna has her stop and make a significantly smaller light, as too much light would cause them to be discovered too quickly. Stella reluctantly complies and starts complaining by sarcastically asking Tecna how they will be able to find Athris in "all this gloom." This causes Musa to shush her and tell her that they will be discovered just as quickly if Stella replaced her big ball of light with all her "gab" and, unfortunately for the Winx, Musa is right, as they find themselves suddenly surrounded by a hoard of Dark Elves with their weapons out!

The Winx quickly engage in battle with the Dark Elves who prove to be formidable and ruthless opponents. They are able to hold them off and striking some of them down until a voice demands that enough is enough. Looking up in the direction of the voice, the Winx find a woman in the air above them and, before they can even react, the woman strikes them down with a powerful blast of dark magic and traps them in a magical cage.

With the Winx trapped, a few Dark Elves approach the woman who turns out to be Morwen, their queen, and tell her that the Winx deserve to be executed for trespassing as per their laws. Queen Morwen finds herself surprised by the sudden arrival of fairies and warns her subjects that they must not be underestimated if they possess the power to enter their realm. She then turns elsewhere and proclaims that it will be King Whisper who will decide the fairies' fates and as King Whisper makes his arrival, he claims that all outsiders are a source of danger to him and his people. To avoid such dangers, Whisper demands for the Winx to be eliminated, which prompts his subjects to brandish their weapons.

Just before they can go through with King Whisper's orders, the Dark Elves are interrupted by the Winx's pleas. Insisting that they did not arrive with bad intentions, Aisha and Stella confess that they have come to the Dark Elves' realm to look for an elf named Athris, and Bloom shows them all their half of her pendant as proof. Morwen insists that Athris is nowhere in their realm and claims that her name sounds foreign to her, however, she still shows a strange curiosity in the Winx's half of the pendant. As Morwen draws nearer to the trapped fairies to get a better look at the pendant, Bloom finds herself being reminded of Athris through the Dark Elf Queen's features until Whisper demands that they waste no more time in executing the Winx. With no other option, Bloom unleashes her Mythical Fire spell on the cage and breaks her and her friends free.

The Winx quickly do battle with the Dark Elves with Musa leading them off by blasting one of them down with her Sound Triad. King Whisper tries to attack Musa in retaliation for striking down one of his men but he is quickly rendered blind when Stella shines her light at the Dark Elves to protect Musa. Tecna then praises Stella on her quick thinking as Dark Elves are too vulnerable to light due to never getting accustomed to it and Stella insists that they must act quickly because the blinding effects will not last long.

Just then, Aisha notices Morwen approaching Bloom from behind and warns her, only for Morwen to snatch their half of the pendant from the fire fairy. Bloom tries to plead for Morwen to give it back but she is immediately shut down by Morwen who demands to know who gave the Winx that half of the pendant. Bloom tells Morwen that they got it from Palladium, an elf from the Magic Dimension, and Morwen realizes that she is familiar with such a name. She only becomes more confused after realizing that Palladium's half of the pendant is identical to hers, which causes the Winx to fear that Morwen may have stolen the other half from Athris in the past. Bloom, Stella and Musa are then hit by a blast of dark magic from behind thanks to a sneak attack Whisper had executed.

With the Winx down, Whisper demands to know what Morwen is doing but Morwen is too absorbed in her own thoughts to answer as she had just attached both halves of the pendant together. In doing so, strange images come rushing back to her until she is interrupted by Whisper shouting for her to destroy the Winx with her powers. Morwen realizes that she cannot do such a thing but Whisper shouts for her to finish them again. Bloom takes this opportunity to reach out to Morwen; for her to realize the truth of how she is Athris. Hearing that name once more helps Morwen to finally realize that she is indeed Athris and she turns on Whisper by blasting him down with her dark magic. Now on the ground, struggling to get back up, Whisper vows to punish Athris for her treachery but he is quickly defeated by Bloom's Enveloping Flame.

Now that everything with the Dark Elves has been settled, Bloom thanks Athris for saving them and Athris finally realizes that she had never been a Dark Elf. She then goes on to confess that she had always been enamored with The Legend of Queen Morwen as it was even her favorite tale, and she greatly admired Queen Morwen for being everything she wanted to be: a resolute ruler who possessed powerful magic and was respected by her people. Ultimately, Athris was so consumed by her insecurities and her desire to be like Morwen that she entered the Dark Elves' realm in the Legendarium World with her sceptre to assume Morwen's role.

Unfortunately, upon entering the dark realm, Athris was quickly corrupted by its wickedness that she became trapped in the role she wished to play and gradually began losing her sense of self the more time passed.

Bloom encourages for Athris not to give up and reveals to the disheartened elf that she can return to her true self if she breaks the sceptre. After hearing this, Athris does not waste a second to snap the sceptre in two and the spell binding her to the role of Queen Morwen breaks along with the sceptre, allowing for Athris to regain her true form. Bloom then tells Athris that she and the Winx will be able to get her back to her home in the Elven Kingdom with their Mythix powers and Athris thanks her before she becomes so overjoyed at the thought of getting to reunite with her beloved.

Back at the Elven Kingdom, Palladium stands before his old house and declares it to be empty without Athris there with him. He thinks to himself over how his undying love for Athris makes it seem like he can still hear her voice and he is in utter shock when he hears Athris shout his name from behind. Turning around, Palladium finds himself face to face with his beloved Athris and the two draw closer to one another to embrace and share a kiss surrounded by pink roses. 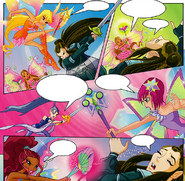 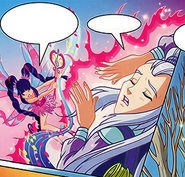 Enveloping Flame!
Add a photo to this gallery

Retrieved from "https://winx.fandom.com/wiki/Issue_125:_The_Kingdom_of_the_Dark_Elves?oldid=499522"
Community content is available under CC-BY-SA unless otherwise noted.