Season 6
The Magic Exhibition is the one-hundred and twenty-sixth issue of the Winx Club Comic Series.

Recently, Musa has been running late to Daphne's History of Magix class which is rather unlike her as she is always one of the first students to arrive. It turns out that the reason Musa keeps running late is because she had been invited to perform as Alfea's representative at a concert being held by the Golden Auditorium, and she has been putting all her energy into composing the perfect song to perform. Unfortunately, trouble starts to brew in Cloud Tower as the Trix have Selina conjure up a fearsome monster from the Legendarium that would be capable of capturing the Winx and give them the opportunity needed to conquer the Golden Auditorium.

It is yet another normal day at Alfea where Daphne has grown accustomed to her new job as the History of Magix professor. Today, she is teaching her class how immense a force can be created through combining the powers of magic and music, though, one fairy who would excel in this field is running late.

Musa manages to rush into Daphne's classroom just as she is teaching the rest of the students about the Fossegrim: one of the many dangerous magical creatures capable of combining magic and music as the spirit will often use his magic fiddle to break the will of any being unlucky enough to come across him. Naturally, Musa tries to apologize for running so late but Daphne simply assures that it is alright and directs her to her seat so that she may resume her lesson.

As she directs everyone to their textbooks, Flora whispers to Musa to see if everything is alright. Musa claims that everything is more or less okay and, once Daphne's class comes to a close, the rest of the Winx voice their concerns for their friend as she is always one of the first to arrive for Daphne's classes. That is when Musa finally reveals to her friends a golden piece of paper and, when asked, she explains that it is an official summon for an evening concert being held at the Golden Auditorium back on her homeworld of Melody. It so happens that she had been chosen to represent Alfea there and the Winx naturally cheer for their friend, and even volunteer to help her prepare for her big night.

While cheering, Aisha excitedly asks Musa if she has figured out what she will be singing tonight but Musa has not chosen the song she wishes to prepare. As Flora and Bloom try to ease Musa of her worries, Musa tells the girls that they, unfortunately, will not be able to come with her to the Golden Auditorium as, thanks to its strict rules, she will only be allowed to bring family members like her father. Annoyed, Stella asks if there is any way they can enter without being seen but Musa insists that they must adhere to the Auditorium's rules before leaving to prepare her piece. As she leaves, Daphne notices her worried expression and takes it upon herself to talk with Headmistress Faragonda to see if she can make some arrangements.

In fact, Faragonda has the Winx called into her office a few hours before the concert to tell her that, after talking with Diletta, the head director of the Golden Auditorium, the Winx will be able to accompany Musa for support! Naturally, Musa thanks Faragonda as the Winx surround their friend to assure her that they will be there to support her to the fullest. Musa then promises to do her best to try and not disappoint everybody.

Meanwhile, in Cloud Tower, Selina and the Trix watch the Winx through their Magic Eye, disgusted at their happiness. This time, though, Stormy has come up with a plan to ruin Musa's big day, which prompts Icy to demand Selina to find and call upon a creature terrible enough to capture the Winx, giving them the opening they need to conquer the Golden Auditorium. Adhering to Icy's orders, Selina calls forth the Legendarium and flips through its pages until she comes across the page of the evil and powerful Fossegrim that resides in the lake underneath the Auditorium.

Later that day, the Winx arrive at the Golden Auditorium just before Musa's big performance. Unfortunately, just as Musa prepares herself backstage, the Fossegrim bursts into the room playing his fiddle. Its melody entrances Musa, allowing for the Fossegrim to whisk her away back into his lair!

A short while later, Diletta announces Musa's arrival for Alfea but she never comes out from her dressing room. Naturally, this worries Ho-Boe and the Winx, which prompts Bloom to jump to her feet and make her way to Musa's dressing room to figure out what is wrong. The rest of the Winx follow shortly afterward and, when they make it to her dressing room, they find that she has disappeared!

As the girls search the room, Bloom finds a strange puddle at the corner of the door and though Tecna believes it to be blackish water at first glance, Aisha uses her power over fluids to figure out what it is exactly. In no time, Aisha finds out that the water comes from "a river or pond that lacks light." It is then that Tecna gets the idea to search for a map of the Auditorium and, when she finds an underground map of the building, she also finds that there is a lake at the center of it. Bloom then urges for the Winx to transform as she suspects that Musa may have been captured by a malicious entity. And so, the Winx go into their Bloomix forms and make their way down to this "lightless lake." As they make their way down there, Bloom advises for them all to keep a close eye out for any danger as they do not know who or what it was that kidnapped Musa.

Flying through the underground tunnels of the Auditorium, Stella tries to make light of situation by commenting on how dark and damp their surroundings are. Tecna quickly dismisses Stella's remarks, claiming that the place is called "the underground" for a reason, until the five fairies reach a fork in the road. Bloom asks Tecna which one of the tunnels leads to the lake but, oddly enough, both leads to the same lake according to her maps. Regardless of this, Bloom urges for them to split into two groups to reach Musa as quickly as possible. Flora offers to go down the left tunnel with Stella as the moss along the tunnel's walls will help to guide her, which leaves Bloom, Aisha and Tecna to go down the right one. Bloom advises for them to be wary as Aisha promises to meet them at the lake, though, as they split off into their groups, Aisha is quick to notice the overwhelming negative energy permeating throughout the tunnels, even going on to state that such a place is not one for fairies.

Soon after splitting up, Flora and Stella are the first to arrive at the lake, only to find Musa trapped within a cube of dark magic.

Seeing as how she seems unable to hear them, Stella proposes that they break her out of the dark cube, which Flora does by using her Chlorophyll Darts spell. Stella then catches Musa with her Total Eclipse and gently lowers her onto the lake's shore. Seeing Musa so unresponsive riles the sun fairy up as she proclaims that whoever did this to Musa must now take it up with her. Flora tries to calm her down by telling her that they must find a way to notify the others now that they have Musa back, but she is interrupted by the Fossegrim, who emerges from the lake's waters and claims to have been waiting for them.

Enraged, Stella demands to know what the "mutant sardine spawn" did to Musa, but the Fossegrim insists that she will find out soon enough. In that moment, Flora recognizes the Fossegrim as the creature Daphne was teaching them about in class and reminds Stella that they will need to stop him from playing his fiddle, as his powers come from the music he plays.

As the Fossegrim positions his fiddle under his chin and draws the bow towards its strings, Flora fires a bundle of vines in his direction to snatch the fiddle away. Unfortunately, she was a moment too late as the Fossegrim was able to play one note on his fiddle and he uses the dark power within that note to drastically raise the water-level of the entire lake!

Stella and Flora desperately try to fly above the rising waters while keeping Musa afloat but are now left unable to properly counterattack. Meanwhile, the rising waters begin rushing out of the lake and into the tunnels leading into it, including the one that Aisha, Bloom and Tecna are currently traversing.

Realizing that the rushing water must be from the "lightless lake," Bloom urges for Aisha and Tecna to pick up speed as Stella and Flora may be in serious danger. Bloom's suspicions turn out to have been fact as, when the trio arrive, they find Stella and Flora barely able to keep Musa afloat as the lake's waters continue to rise and become much more tumultuous. Acting quickly, Aisha uses her power over fluids to make the water return to its original state.

With the water now receding, the Fossegrim leaps for his exposed fiddle as Tecna reminds her that she must destroy it since it is the source of his powers. Acting quickly, Bloom launches her Volcanic Attack at the fiddle and destroys it before the Fossegrim is able to get his hands on it. With the fiddle now destroyed, Musa is freed from her trance and transforms into her Bloomix to join the fight.

Powerless, the Fossegrim swears that the Winx will pay for all this but Bloom taunts him as he is now up against all six of the Winx. Aisha then gives Musa the honor of dealing the final blow to the Fossegrim, which she does happily with her Crystal Voice spell. With the Fossegrim defeated, the Winx rejoice as Selina and the Trix are left frustrated at yet another failure. Icy takes this out on Selina by threatening her, claiming that it would be better for her if she used her Legendarium to evoke a monster worthy of its name.

After everything has blown over, Musa returns to the stage and performs her song, which earns her a standing ovation from the crowd once she finishes. The Winx and Ho-Boe then rush on stage to praise Musa on a wonderful performance, with Ho-Boe specifically expressing his pride in his daughter and claiming that her performance was one of magic. 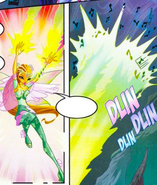 Let every single drop return to its place! The Princess of Andros commands it!

Crystal Voice!
Add a photo to this gallery

Retrieved from "https://winx.fandom.com/wiki/Issue_126:_The_Magic_Exhibition?oldid=515524"
Community content is available under CC-BY-SA unless otherwise noted.