Issue 127: The Legend of the Lantern

The Legend of the Lantern is the one-hundred and twenty-seventh issue of the Winx Club Comic Series.

In Gardenia, an old man stumbles upon a Halloween party as his jack-o'-lantern lights up, signifying he is going in the right direction. He enters the party and proclaims that a significant source of magical energy is near, and that he may soon find his beloved Sydonia. Upon seeing all the costumed partygoers, the man begins to question where he is as it looks as if he is in a gathering of witches and wonders why Sydonia would be among such obscure sorceresses. The man goes up to a partygoer and asks if she has seen a sorceress named Sydonia. Thinking the partygoer is a witch, he addresses her as such and she responds negatively, and his search yields no results.

The bartender then asks the man if he wants something to drink. Thinking he is being offered a magic potion, the man declines. Then, his lantern begins to glow brighter, meaning the source of magical energy is getting closer. In the middle of the dance floor, the man stumbles upon the Winx and declares them the source of the emanating magical energy. Thinking he will not be able to reach them in the midst of all the music, he uses his lantern to turn the speakers off.

The partygoers quickly become angered at him, but he uses his lantern to keep them at bay. The partygoers then call for help, calling the pumpkin "haunted" and the man "a monster". The Winx approach him and ask him to come with them as the crowd is turning on him. The man apologizes to the Winx, saying he just wanted to speak with them but those witches attacked him. Bloom tells the man that he has been deceived by their costumes and assures him that none of them possess magical powers.

Musa and Stella state that they, the Winx, are the only ones with magical powers and are the most famous fairies in the Magic Universe. Aisha asks the man why he was looking for them. The man introduces himself as "Jack" and implores the Winx to listen to his story. Jack says that a long time ago, he was enamored by a beautiful sorceress named Sydonia. She did not live in his village, but in a small house at the top of a mountain that he would venture to everyday to see her.

To help with his journey, Sydonia gave Jack a magic lantern whose light guided him and protected him from danger. Thanks to the lantern, he always felt close to his beloved. One night, an unnatural mist descended upon the valley and the light of the magic lantern could not pierce it. Jack does not know how long he wondered in that fog but now he finds himself here, old and tired. He thought that when the lantern began to shine again he had found Sydonia, but it led him to the Winx.

Bloom thinks to herself that Jack's name and his strange lantern reminds her of an old legend her father used to tell her. Bloom tells the Winx of her realization saying that according to legend, a spell had condemned him to wander aimlessly, guided only by the light of his lantern. Tecna then rationalizes that he must be a character in the Legendarium World. Bloom concludes that he must have gotten lost in their world, but the Winx can bring him back home. Jack questions if the Winx would really do that for him, and Stella assures him that thanks to the Mythix power, the Winx can travel to the Legendarium World, where legends are real.

After Jack expresses his gratitude, the Winx transform into Mythix fairies and transport themselves and Jack into the Legendarium World. They materialize in front of Sydonia's house and enter in the hopes of finding her. They open the door to find the house in disarray. Jack is in disbelief that his lantern is not glowing to signify her presence, and Tecna suggests that she may not live here anymore as it has been a long time since Jack left. Jack, followed by the Winx, heads to the village to find news of her.

Upon arrival, Bloom and Stella comment on the strangeness of the place as Jack is greeted by Madame Sally. Jack is amazed that he has been away for so long and Sally has not aged a day, but Sally says that it has only been a week since his last visit. However, Sally says Jack looks to be in bad condition. Bloom assures her he just needs a bit of rest and that it is nothing serious. The Winx and Jack head away from her as Jack expresses his disbelief in the fact that he has only been away for a week.

Jack says it feels as if he wandered in that fog for years, but Stella tells him he is the victim of a spell. Jack enters his house and realizes that everything remains as it was before he left. He sits down and asks who could have done this to him and where Sydonia could be. Just then, his lantern begins to glow. Jack says that this time the lantern is detecting Sydonia's magic and she must not be far away.

Jack and the Winx exit his house and begin to follow the light outside of the village and into the woods. On the search, Jack is greeted by Vincent, puzzled by his newly aged look. Jack says it is a long story he will tell him later and asks Vincent if he has seen Sydonia. Vincent says he does not come here very often as his father forbade him to approach the forest. Vincent warns Jack that those who enter the forest do not come back, and to not deviate from the path.

Jack says he does not have any other choice as Siydonia is in danger. Bloom tells Jack to have courage as he uses the light of his lantern to guide the way. As the Winx venture on, the branches begin to grab them. Tecna warns Jack to stay back as they are seemingly controlled by a dark magical force. As the Winx begin to attack the branches, Flora cautions to not damage them and uses her magic power to restore the forest.

Aisha then points out a tower in the distance previously hidden by the dark forest. Jack recognizes the tower as the home of his friend Salzius, a powerful sorcerer and a trusted friend of his. Thinking he will have news of Sydonia, the Winx and Jack travel to the tower. In the tower, the Winx and Jack encounter an angry Salzius who warns Jack not to take another step toward him. Salzius says he is surprised to see Jack who had managed to return from the dimension of which Salzius sent him.

Jack becomes confused as Stella realizes they are in trouble. Now knowing Salzius had cast the spell on him, Jack asks him why he has done so as they are friends. Salzius leaves the explanation to Sydonia, who is descending the staircase. Angered at Salzius, Sydonia tells Jack that Salzius envied their happiness and captured her. Sydonia asks Jack to save her, but in demanding Salzius to release her he is struck by his magic attack.

Musa attacks Salzius but he proclaims to Jack that his reinforcements will not be enough. Just then, he transforms into a being of pure darkness, making him invincible. Bloom and Tecna attack him but their spells have no effect. Sydonia tells Jack to use the magic lantern to counteract Salzius' darkness, but Jack questions his abilities as he is not a magician and its glow is too weak. Stella tells him not to worry as she will use a spell to increase the lantern's brightness.

Converging the magic of the lantern and Stella's spell, they manage to revert Salzius to his normal form. Seeing that he has lost the power of invincibility, the Winx attack him in a Mythix convergence, defeating Salzius and restoring Jack's youth. Jack and Sydonia reunite, expressing their happiness as Jack states her magic light guided him and gave him hope. Jack thanks the Winx and once again declares his love for Sydonia. 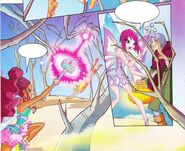 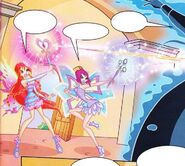 Flames of Bravery! and Prismatic Dart!

Bright Star!
Add a photo to this gallery