Magic Battle is the twelfth issue of the Winx Club Comic Series.

With the Dragon's Flame in their possession, Red Fountain destroyed, Cloud Tower under their control and the whole of Magix City completely wiped out, the Trix finally decide to take out the last surviving school with the biggest wave of their Army of Darkness yet. With no time to spare, Bloom desperately searches for ways to regain her lost powers, all with the help of Daphne, a mysterious fairy and her Pixie companions. Just when all seems lost, Bloom manages to regain her Dragon's Flame and returns to Alfea to take down the Trix and return to her life as an aspiring fairy.

Now that they have the Dragon's Flame, the Trix carry out their ultimate goal: to take over the Magic Dimension. Since they already took control of Cloud Tower and have destroyed Red Fountain, they conjure up an enormous wave of monsters to take out the last standing college: Alfea.

At Alfea, everyone is trying to fight back the Army of Darkness but the monsters that they destroy keep reforming. Everyone's positions start to unravel and no reinforcements can come back them up because Alfea had lost all communication with Magix City already. Faragonda insists that their only hope is Bloom now.

Meanwhile, with Bloom's group, Sky and Brandon suspect that Knut may have forgotten his way around the underground tunnels. However, Knut quickly finds a hidden passageway in one of the walls. The passage ends up being Cloud Tower's trash chute and the group lands in a heap of garbage. As Stella yells at Knut for getting them covered in trash, the group is quickly surrounded by a group of trash-eating monsters known as Scarablatts. One of them attacks Knut and Bloom quickly rescues him by jabbing its leg with an old nail. Another one of the Scarablatts is about to attack Brandon until a mysterious cloaked man jumps out from behind and shocks it with a stun gun. The cloaked man reveals that he shocked the leader of the Scarablatts, which caused the rest of them to scatter. Sky asks who the cloaked man is and he takes off his cloak, revealing himself to be Riven. Riven explains how he was able to escape the Cloud Tower dungeons and Sky and Brandon are impressed with how he managed to remember everything from their classes at Red Fountain while using that knowledge to save himself and everyone else. Riven joins the group on their mission into Cloud Tower and agrees to help them fight the Trix.

The group makes it into Cloud Tower and find a door that stands out, leading them into a room where the Trix were keeping Bloom's stolen Dragon's Flame. When Bloom tries to touch the fire, Icy freezes it and she attacks the group. Before the Trix destroy Bloom and her friends, Griffin attacks them from behind. Griffin reveals that, while the spell locking her cell was a very powerful one, Riven distracted the guards long enough for her and the imprisoned Cloud Tower Witches to combine their powers and free themselves. Griffin summons up a large wall of rocks to trap the Trix to buy them some time to escape. Griffin leads everyone to the very top of Cloud Tower and creates a magical path in the sky that will evacuate everyone to Alfea. As they are trying to evacuate, the Trix break through Griffin's rock-wall and lead their army to the top of Cloud Tower. When the army approaches from behind everyone, Sky decides to stay behind and hold them back until everyone can escape. Bloom refuses to leave Sky behind and helps him with the help of a high-tech air bike given to them by Griffin.

Sky and Bloom successfully fight off the army and everyone manages to escape in time. They try to drive off from Cloud Tower too but they are hit with an attack and crash somewhere in the forest. They try to search for reinforcements in Magix City but Daphne tells Bloom to find her at "the lake at the fortress of light" since she is close by. Sky and Bloom agree to split up and meet back at Alfea.

On her way to the lake, Bloom realizes that she does not know where the lake is. It turns out that Bloom is being spied on by a group of Pixies that assume she is an evil witch like the Trix. The pixie from Alfea tries to convince them that Bloom is a powerful fairy and the pixies are met up with a fairy known as Aisha. Aisha decides to help Bloom find her way but only if they keep their cover, so the Alfea pixie makes a path for Bloom. Aisha then tells the pixies that they may meet Bloom again. Bloom follows the path and makes it to the lake and meets up with Daphne, where she tells Bloom that she never lost her Dragon's Flame.

Meanwhile, Sky makes it to Magix City, where he sees that the Trix petrified all of the citizens with a powerful dark spell. He is attacked by the monsters stationed there and almost gets killed before the monsters are destroyed with a fire blast.

At Alfea, the Trix decide to conquer the school using their own pieces of the Dragon's Flame alongside their army. Faragonda and Griffin try to keep them out with a barrier but the Trix use a powerful blast of magic to break through it and attack the headmistresses. They are about to be attacked again but they are saved by Bloom, who can use her powers again. While the Trix are distracted, the Winx transform to fight alongside her. They are able to weaken Darcy and Stormy and the headmistresses quickly trap them in a giant iron ball.

At the lake, Icy and Bloom's battle ensues. Icy freezes Bloom in a giant block of ice, but Bloom is able to break free by summoning her Dragon's Flame and quickly defeats Icy. The Army of Darkness break apart and can no longer reform, letting everyone at Alfea know that the Trix have been defeated.

A few days go by and the Trix are taken into isolation and all communication with Magix is re-established. Bloom tells everyone that Daphne told her that her powers could never be completely taken away, and that she had her powers all along. She thanks Daphne for telling her the truth and comes back to Alfea in order to become a real fairy.

"A wall grows here in front of me to stop the giants so easily... Place large boulders on the ground... and tall rocks all around!" 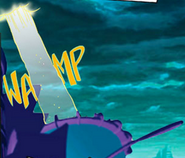 "May we find a path magical and bright... A road created to let us take flight!"

"Fire of the Dragon... Come to me!"
Add a photo to this gallery

Retrieved from "https://winx.fandom.com/wiki/Issue_12:_Magic_Battle?oldid=475269"
Community content is available under CC-BY-SA unless otherwise noted.