An Unforgettable Party is the one-hundred and thirtieth issue of the Winx Club Comic Series.

A huge celebration is being held on Solaria to honor the day which makes the anniversary of King Radius' ascent to the throne and thus, every monarch and dignitary makes their way to show their respect. However, just as the celebration begins, Radius tries to attack Teredor on sight. After realizing that the king had been put under a trance, the Winx try to stop the sinister sorcerer Celsius but get caught up in his chaos.

A large crowd gathers in front of the Solarian Royal Palace, erupting in cheers and joyous celebration as they await the party that will be held in honor of King Radius' ascent to the throne. The first batch of guests to make their arrival is none other than Crown Princess Stella and her closest friends, the Winx Club.

As the six fairies make their way through the eager crowd, an anchorwoman asks them why they had not come with their knights, to which Stella reveals that the boys are occupied with their training at Red Fountain, with Prince Sky having been assigned a special mission. Though she wishes that they could have come along, Stella tells the anchorwoman that she and the Winx will still enjoy themselves before they head inside. Once she is away from any filming cameras, Stella whispers to Bloom over how the music her father picks for his parties always tend to be boring, but she could not say something like that on TV. Bloom laughs at her joke as they pass the castle guards before Stella directs the group to the Royal Beauty Salon so that they can indulge in a surprise super beauty treatment before the party starts.

As the girls get comfortable and enjoy themselves, they catch a real-time news broadcast announcing the arrival of Prince Celsius, beloved brother to King Radius. Naturally, this shocks Stella, who always thought her father had no siblings. Soon after, a voice clarifies that Celsius and Radius are half-brothers and, when Stella turns to identify the voice, she finds her mother, Luna, entering the Salon. The young princess leaps from her seat and hugs her mother closely before insisting that she tell her of this mysterious new relative of hers. Luna happily obliges and begins to recount the tale of Radius and Celsius' past.

According to the former Solarian queen, Radius and Celsius grew up close, as if the two were fully related by blood, but Celsius believed himself to be a better, more appropriate fit for the role as king. This eventually sparked a quarrel within the royal family until Celsius ultimately abandoned Solaria, leaving Radius to continue on as successor to the throne. Since all of this happened well before Stella was born, it is natural that she remained unaware of his existence.

Just as Luna finishes her story, Celsius proclaims on TV that he realized Solaria was his one and only home after he spent years visiting various far-off worlds and realms. Believing that he and Radius should make peace, Celsius gestures over to a large chest he brought as a gift, but the one thing that catches Stella's attention is how he seems to be hiding his necklace. When Bloom asks what is wrong, Stella explains that all Solarians love things that shine, so there would be no point in trying to hide something like a shining jewel only to hide it. Bloom claims that she can just ask her half-uncle about it at the reception, which causes Stella to fly into a panic, as she completely forgot about it. Just then, a young servant notifies Stella of her dressing with her court ladies, but the Solarian princess insists that she can do it herself now that she is pressed for time. So, with a wave of her hand and a little bit of magic, she and the Winx are quickly dressed for the event.

Thankfully, the Winx arrive at the royal reception just in time, before being followed by Prince Sky, who promptly offers to accompany Bloom during the event. Meanwhile, Stella rushes up to hug and kiss her father on the cheek before the both of them go on to greet their guests, starting with Aisha's parents, King Teredor and Queen Niobe of Andros. Next, they welcome the Domino Royal Family; Radius formally greeting King Oritel and Queen Marion and Stella excitedly greets Crown Princess Daphne and her husband, Prince Thoren.

Soon enough, the most anticipated guest, Prince Celsius, enters the ballroom and bows to his half-brother. Radius joyously accepts Celsius' homage, even voicing his relief at how his brother has finally recognized him as the rightful heir, however, a mysterious light overtakes Radius and causes the king to fly into a rage that he directs at Teredor, believing the King of Andros to be a monster attacking his daughter.

He demands that the guards attack this so-called monster but, when they express confusion over the situation, Radius snatches a halberd from one of them and charges right at Teredor. Stella quickly steps in front of both him and Niobe as she demands to know what her father is doing. As the whole crowd stands in shock, Bloom notices that Radius' eyes have changed and, once she recognizes what it is, quickly informs Stella that he was hypnotized. Using her light magic, Stella snaps her father out of his hypnosis and directs suspicion onto Celsius, believing him to be the sole culprit since he is the only one who would wish to sabotage the event. Having been found out, Celsius mockingly praises Stella for her sharp wit, then reveals that he planned to have the whole realm see Radius as a mad king, which would lead to him being ousted, even at the cost of triggering a realm-wide war.

Upon this revelation, Radius sends his guards after Celsius, who uses the light of his amulet to open up the chest he brought to the party. In doing so, he unleashes a swarm of mutant insects on the guests. This prompts both Sky and Thoren into action but, at the very moment Sky pulls out his Moon Khukuri, Celsius fires the same light at the pair of princes that he used on Radius. Bloom manages to strike the amulet, shattering it with a blast of fire, but she was too late, meaning that both Sky and Thoren are still left under Celsius' hypnosis.

Chaos continues to grow within the ballroom as the royal guards can no longer distinguish friend from foe, the party-goers continue to panic in their attempts to flee from the mutant insects, which have grown even larger. To ensure that no one gets hurt, the Winx will themselves into their Bloomix forms to guard the innocent and properly dispose of the insects. 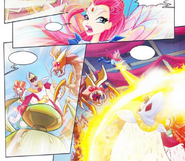 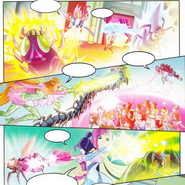 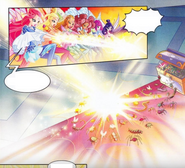 Bloomix Convergence!!
Add a photo to this gallery