Nex's Test is the one-hundred and thirty-first issue of the Winx Club Comic Series.

To prove he can protect Aisha, Nex accepts her father's challenge to destroy the last Melusina in Andros. But when the Paladin does not return by the next day, Aisha worries that something has happened to him. She and the Winx set out to find him.

Aisha, Nex, and the Winx are having dinner in Andros Palace with her parents, King Teredor and Queen Niobe. Teredor brings out a cake made by the best patissiers in Andros, and he wants Aisha to cut it. Niobe says it is for the special occasion of getting to meet Aisha's new boyfriend.

Nex asks Aisha to let him cut the cake instead and says her parents are about to be amazed. He tosses the cake up and slices it in midair, telling everyone the pieces will land on their plates. But he quickly realizes he miscalculated the aim.

The cake slices land on the diners' heads. He apologizes to Teredor and asks what he can do to make up for his mistake. Angrily, the king orders him to sit down and try not to cause any more trouble. Niobe feels her husband is being too hard on him.

When Nex returns to his seat, he complains to Aisha that his plan was a disaster. He thinks her father hates him now. Aisha reassures him that he was just trying to make a good impression on her parents, and Teredor will love him once he has gotten to know him better. Nex reluctantly believes her.

The king says to Niobe that Nex is nothing but a braggart and is not suitable for Aisha. Bloom, Stella, and Niobe defend the couple, saying the two are fantastic together, seem made for each other, and seem so happy together. But Teredor wonders if Nex can truly protect Aisha, or if he is just showing off. This comment angers her. She tells him Nex is not her bodyguard, and they love each other.

Nex, however, thinks the king is right to be concerned and sees this as an opportunity to prove his courage. Teredor asks if he has ever heard of the legend of the Melusina, to which Nex replies he has not. According to the legend, the Melusines were half woman, half serpent monsters who roamed Andros and constantly fought with the mermaids before the realm became covered in water. Aisha says she thought the creatures were extinct, but Teredor reveals that one remains. She lives in the ruins of an old city on a remote island. If Nex can destroy her, the king will acknowledge him as a warrior worthy of Aisha.

The Paladin accepts the challenge and rushes out of the great hall. Aisha hurries after him. She catches up with him in the palace garden and tries to convince him not to go because the test is too dangerous. Besides, their love for each other is all that really matters. Nex feels the same way, but he wants to show Teredor he is ready to do anything for her. He believes the test is the only way to earn the king's trust.

Nex puts on his helmet and zooms away on his Wind Rider. Afraid he will put himself in danger, Aisha tries to rally the Winx to follow him. But Bloom and Flora tell her to let him go. They think he just got excited like he often does, but he will calm down and come back to her soon. Aisha hopes they are right.

The next day, Nex has still not returned to the palace. While Aisha is waiting by a window, Teredor comes up behind her, hugs her, and apologizes for being too hard on her boyfriend. She understands her father just wanted to test him, but she knows Nex accepted the challenge because he wanted to prove he really cares about her, even if it meant risking his life.

Tecna uses her phone to pick up his Wind Rider's signal and trace his path. The Winx transform into Bloomix fairies, and they fly out of the palace toward the lost waters of Andros. Aisha warns everyone to be careful because no one who has sailed into these waters has ever returned.

Down below, Bloom spots what looks like a forest growing out of the ocean. Flora recognizes it as a field of carnivorous aquatic plants. She tries to warn everyone, but it is too late. They have already flown too close.

The plants begin to attack them. One of them snaps at Stella, but she manages to evade it. A swarm of them come after Aisha. Musa warns her just in time for her to use her Morphix Mega Wall to protect herself. Another plant wraps itself around Tecna's leg, and Bloom and Stella free her with their Volcanic Attack and Light Spectrum spells.

True to her nature, Flora does not want to hurt these creatures. She thinks they are not evil; they are just trying to protect the ocean from intruders. Stella and Musa doubt her, but she has an idea for how to calm the plants down. She uses her Spring Shower spell on them. They stop attacking the Winx, allowing them to keep going.

Tecna takes out her phone again and locates Nex's Wind Rider signal close by. Musa spots the Melusina's island below. When the Winx land, Tecna sees the Wind Rider parked against a rock, but Nex is nowhere in sight. Aisha starts to panic and asks her friends to help her find him. 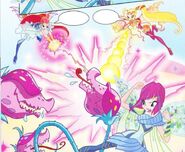 Spring Shower!
Add a photo to this gallery

Retrieved from "https://winx.fandom.com/wiki/Issue_131:_Nex%27s_Test?oldid=515529"
Community content is available under CC-BY-SA unless otherwise noted.