Thanks to their rivalry, Bloom and Diaspro are dragged into the dragon homeland and must work together if they wish to escape.

A large, wild dragon is currently in the care of Red Fountain in order to nurse it back to health. The doctor treats it and tells Codatorta that they can set it free whenever they please. He decides to do so after the inauguration party at their newly built Red Fountain.

At Alfea, the girls are getting excited about the party, except for Bloom, she tells the girls that he has been acting moody and strange, and she fears she knows why.

At Red Fountain, Brandon, Sky, Saladin and Codatorta greet their guests of honor: King Erendor and Queen Samara of Eraklyon, and Princess Diaspro and her parents. Diaspro and her family were invited along by Sky's mother, Queen Samara. Sky greets his parents with great joy but remains formal towards Diaspro. Diaspro however, wishes to finish a conversation they had, which involves her and Sky's relationship status.

In a private area of Red Fountain, Sky and his mother are in a serious discussion about his future. He tells his mother she should not have invited Diaspro along. Sky tells her he does not love Diaspro, and is still thinking about Bloom but it is still hard for him decide; he wants time to think, alone. His mother understands, but also reminds him that as a prince, he must remember his responsibility and that marrying Diaspro will bring prosperity to their people. She asks if that is what he wants for his people - to be prosperous and happy. It seems her words have gotten to him and she asks that he try to talk to Diaspro again.

The party at Red Fountain begins and Diaspro uses this opportunity to talk and and dance with Sky. They dance but Sky affirms that he only holds her great regard but nothing more, even when Diaspro proclaims she loves him. The Winx finally arrive at the party, Bloom notices Sky and who he is dancing with. Sky also realizes that Bloom is here and keeps looking at her direction. He is able to get away from Diaspro to ask Bloom to dance. This enrages Diaspro and seeks a way to tarnish Bloom's reputation. She shoves past people and finds Doradil; she lies to him about a bet she wants to win against a friend. The "bet", she tells him, is that her "friend" will not kiss a stranger unless she spends two hours with him. Diaspro tells him that her "friend" is Bloom, which gives Doradil a bit of a fright but Disapro is still able to persuade him to.

As Bloom and Sky are dancing, Sky accidentally offends Bloom by say that now that she is famous, it will be easier to be together. Bloom refuses to speak to him and Diaspro is able to dance with him again, much to Sky's dismay. Away from them and watching, Bloom cries a bit, hurt by what had happened until Doradil introduces himself to her. He asks if she would like to see a dragon and thinking it would be a good idea to make Sky jealous, she agrees. Sky notices that Bloom is following Doradil and Diaspro is happy by the turn of events.

Where the wild dragon is held, Doradil tells Bloom of how it came to Red Fountain and tries to flirt with her. Diaspro makes up an excuse to leave the ball room to try and take a picture of Bloom kissing Doradil to show to Sky. But as Doradil tries to kiss her, Bloom slaps him. Doradil whines to Diaspro who tells him scram.

Diaspro confronts Bloom and demands that she stay away from Sky, Bloom refuses to. They awaken the sleeping dragon as they argue. The two fairies then transform to fight, Diaspro launches her attack but Bloom avoids them and chooses not to use her powers against Diaspro. Bloom dodges an attack from Diaspro which ends up break the lock of the dragon's cage, setting it free.

The dragon captures Diaspro, roars and flies away. Bloom holds onto its tail to try and rescue Diaspro. The people inside Red Fountain hear the roar and runs out to see that dragon is flying away. Doradil tells them it had taken Diaspro and Bloom. They prepare a battle ship to rescue them.

Meanwhile, the dragon arrives at its homeland. Diaspro had fainted at some point and Bloom feels weak from the evil air surrounding them. Bloom notices the dragon's nest and concludes that Diaspro is food for the dragon's babies. The dragon drops Diaspro into her nest, and Bloom gets off as well. Diaspro regains consciousness only to see baby dragons trying to attack her.

Bloom fights them off and saves Diaspro. They proceed to run away but the mother returns, they duck, causing them and an unhatched egg to fall. They land on the lower part of the mountain, when they see wild beasts called Chamalion, readying to snatch the eggs from the nest for a meal. They chase after Bloom ( who is carrying the egg) and Diaspro but are scared off by the mother dragon; Bloom and Diaspro take cover in a cave.

In the cave, Diaspro finds Bloom strange as she saved Diaspro. Bloom reasons that she would have done the same and confesses that she does not think Diaspro is all that bad. Bloom also admits that she is confused about her feelings about Sky. Diaspro expresses gratitude for saving her life but that she will remain Bloom's rival for Sky's feelings.

The mother dragon flies off, just in time for the Winx and Specialists to see her drinking sulfur. She then breathes fire at their space ship causing them to crash. It then flies off again. They get out of the space ship and follow the dragon.

In the cave, Diaspro and Bloom observe the dragon's movement when the egg hatches and mistaken Bloom as its mother, not leaving her alone. The mother returns and breathes fire into the cave, forcing them to crawl deeper into the cave and reach the center of the volcano where the magma resides. Luckily the Winx and Specialists sees them and get their attention. However, the Chamalions return and try to assault them. They flee from them, running across a natural bridge but it collapses, sending to Chamalions to their deaths and leaving Diaspro and Bloom holding on the edges, hanging on for dear life. Sky quickly slides down but becomes indecisive on who to save first. The others come to their rescue instead, saving their lives. The two girls do not waste time in glaring at Sky for his actions, or lack thereof. The baby dragon is also safe as well and its mother is there with him.

The whole group heads back to the ship and Diaspro brags to Bloom that Sky was about to save her first. Of course Bloom is in disbelief but still ponders what Sky would have done for her as Diaspro walks ahead of her. Their rivalry still remains. 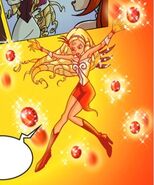