Season 1 Arc
The Castle (also known as First Day in Magix) is the first issue of the Winx Club Comic Series. This comic is featured in Winx Club Vol. 1: Bloom's Discovery. It was also released to Kindle on December 15, 2013.

After Bloom decides to attend Alfea to learn how to use magic, Stella takes her and her family to see the school. Her parents cannot stay with her and so Bloom begins a new chapter in her life in world of magic and making new friends.

Mike, Vanessa, Bloom and Stella are now standing before Alfea, but as Mike tries to enter, a barrier prevents him, or any other non-magical beings, from entering. Seeing as this is where they part ways, Bloom says goodbye to her parents for now and Stella teleports them home. The two girls cross the barrier and begin their new school year.

Other Fairies arrive at Alfea for the beginning of the school year. Bloom notices Griselda who is checking for the students' registry which prompts Bloom to remember that she did not register, but Stella lies to Griselda saying that Bloom is actually Princess Varanda of Callisto. Bloom and Stella meet three other girls: Flora, Musa, and Tecna. The girls take a trip to downtown Magix to hang out and eat ice cream. While there, Knut finds and follows them.

While the girls are sitting at a table, Bloom tries to call her parents on her cell phone, but her phone from Earth does not work on Magix. Tecna starts to make fun of her "primitive" phone, making Bloom angry. Bloom goes to find a payphone instead. While talking to Vanessa, she sees Knut and decides to follow him, wondering what he is up to.

While awaiting Bloom's return, the others are sitting on a fountain with Tecna regretting her comments about Bloom's phone, believing she had offended. Stella reassures her that everything is alright and proceeds to find Bloom. Walking into an alley, Knut sneaks up on Stella and steals her scepter, bringing it to three Witches, the Trix. Bloom tries to fight them, but her powers are too weak against them, and Icy freezes Bloom in a block of ice.

Bloom's friends try to fight the Trix, but their powers are turned against them. Bloom does not give up and her belief in herself transforms her for the first and uses all her power to escape from the ice. Wanting to avoid a battle, the Trix escape and take Knut with them.

In congratulating her, Stella accidentally calls Bloom by her real name, and the other girls discover that she is not actually Varanda. And so, Stella proceeds to tell them the truth on the way back to Alfea.

Back at Alfea, Faragonda and Griselda had eventually learned that Bloom is not Varanda, they asked her why she had lied about her identity and when she told them that she truly wants to learn to become one Faragonda allows her to stay at the school. 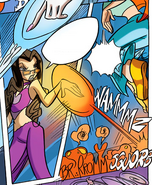 Retrieved from "https://winx.fandom.com/wiki/Issue_1:_The_Castle?oldid=515398"
Community content is available under CC-BY-SA unless otherwise noted.