Issue 2: The Secrets of Alfea

It is time for the annual welcoming-gift exchange ceremony between the fairies and Specialists, a wondrous occasion indeed, but the Trix have decided that this is the perfect time to steal Stella's scepter and wreck havoc amongst the fairies.

Bloom and Stella are in Professor Wizgiz's class, he gives each girl a mirror and tells them to concentrate and change the color of their hair, each girl succeeds, but Bloom fails. She finally goes in the library and sees a book called 'The History of Alfea', when suddenly something appears. Tecna comes in and says she invented a little robot which goes up and reads the titles of the book that are too high. Bloom gives it a try but asks for too many subjects, leading it to break and fall down. Tecna gets mad at Bloom and storms out of the library.

Back in their room, Stella tries to helps Bloom in concentrating and changing her hair color, Bloom tries to change her hair color but gets a little distracted and ends up changing her hair into a mixture of blue, pink and blonde. Eventually, her hair changes back to normal. The mirror flings from her hands but Flora’s little plant catches it. Bloom asks them for the reason they came here, Stella says that she wants to be admired by all and eventually also says to become a good fairy, and helping others after receiving disapproval stares from Flora and Bloom. Flora answers that she likes to learn new things, while Bloom is still puzzled for which reason did she come to Alfea.

The next day, Faragonda, Griselda and the fairies are having breakfast, but Bloom wakes up late and asks for forgiveness. Faragonda announces that they have a long standing tradition of friendship and hospitality, and this year they will be throwing a big welcome party for the new fairies and the Red Fountain knights would also be coming. The ceremony will be held in the castle. And the party would be today. The fairies get excited and start decorating the castle.

Meanwhile, at Cloud Tower, a school of witches they decide to ruin the Alfea party as they did not invite them. Griffin, the headmistress of the school, announces that whoever gives the best plan will be given a reward. The Trix also get excited.

Meanwhile, in Alfea the Winx and the other fairies are getting ready for the party, Stella asks Bloom what she is going wear, but Bloom has nothing. Musa comes in the dorm and says to them they are being called down to decorate the hall. They hurry down while Bloom says that she will clean the room and then join them. But instead she hurries to her closet and starts panicking over her outfits. She finds a blue dress, which she once wore to the disco, but it was all wrinkled and she decides to iron it, but eventually burns the dress. She decides to go to the library. At the library, she finds a map of the Alfea Underfloors in The History of Alfea and sees that there is a Costume Depository for costumes and heads there with map.

Meanwhile, a Red Fountain ship appears in Alfea's courtyard, and Faragonda greets them. The Red Fountain students go to the storeroom to store their gifts but they leave their gifts outside the storeroom and run to get ready. Meanwhile Bloom figures out the way to the storeroom and finds the perfect dress for her but it does not fit her. Thankfully, the dress is magical and she alters it. She realizes that someone else has entered into the storeroom - the Trix. They had entered through a tunnel to ruin the Alfea party. Griffin had chosen their plan and as for the prize, they themselves could sabotage the party. The Trix also realize that someone else was in the room, but Bloom hides from them. She takes the dress and rushes out of the room, but enters the Magic Labyrinth and gets lost. She decides to take some thread from the dress and tie it on the entrance's door knob and trails the thread to help her identify where she has already been, preventing confusion.

Meanwhile, outside store room the Trix open the Red Fountain gifts and discover magic eggs. Bloom almost finishes her dress, when she hears the Trix. They use magic on the eggs, placing serpent rats inside them. But Bloom finds them and Icy attacks her, she dodges the attack and realizes that she had spent hours in the Labyrinth but here she had only been gone for a few minutes, the Trix follow her and gets lost in the Labyrinth, meanwhile Bloom finds her way through the doors but the Trix have difficulty. Icy uses a spell on a door, but the spell bounces back and everything collapse causing them to land on a cliff.

Once outside, the dress magically resews itself into the dress Bloom had previously altered. Now, Bloom rushes to warn others about the enchanted eggs. Bloom quickly relates everything to the Winx, just then Brandon and Sky bring the trunks, the Winx decide to do a counter spell, they restored the magic eggs and saved the day. For the Trix they were stuck in the Magical Labyrinth and end up getting chased by the serpent rats. 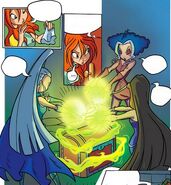 "Those presents with just a touch... Once they are opened, will become... serpent rat eggs!"

"Open every door and show me the way out!"

"With our will may reality change! Whatever the presents have become may they transformed again!"
Add a photo to this gallery

Retrieved from "https://winx.fandom.com/wiki/Issue_2:_The_Secrets_of_Alfea?oldid=494286"
Community content is available under CC-BY-SA unless otherwise noted.