Love Betrayed is the forty-ninth issue of the Winx Club Comic Series.

Continuing with their training, the Winx and Specialists must make sure that the newly formed Knights of the Star work well enough to keep the Kingdom of Thordal safe for its people. Everything seems to be improving for the kingdom, but the Trix still refuse to let the Winx get high marks. After noticing how Queen Electra and Helfred have been looking at each other, the Trix plot to have Count Sargon force the two into a passionate romance that would show King Thorgal that the knighthood would never work. The Trix and Sargon's actually works and it is up to the Winx to uncover the truth behind the situation before the Kingdom of Thordal falls into ruin.

The story begins at Alfea, where Knut sees to be working in Faragonda's office. He notifies the headmistress of a video call she is getting from the Kingdom of Thordal and that he saw Bloom's face on the screen when it lit up. Faragonda rushes over to her desk to receive the call and thanks Knut for letting her know. She asks Bloom how she and the Winx have been doing and Bloom reports that they have finally managed to find moment peacefully enough to contact her. Faragonda is glad to hear that the girls are alright, but she reminds them of how important their training exercise is and tells them that she still needs them to fill out a proper evaluation form. She then asks if the Kingdom of Thordal is really as "backwards" as the rumors claim and Bloom confirms this.

The kingdom's people are all very poor and make their livings solely off of farming. The cities are surrounded by large walls in order to keep out bandits and enemies of the kingdom, and the kingdom's soldiers still wear heavy metal armor and carry around lances and swords. Even though the Winx are staying as guests of the queen's, there are very few comforts in the castle and it is still very cold inside it.

Faragonda pities the girls for having to put up with those kinds of conditions but she insists that these practice exercises are very vital to their grade and experience as fairies. As the Magic Dimension holds many different worlds, the girls will only be able to learn how to properly solve problems through magic by experiencing these various realms first-hand. She then asks if the girls have been able to analyze the situation yet and that is when Stella chimes in, claiming that they have practically solved the problem already. Though, she tells the headmistress that it would have been better if the Trix had stayed at Cloud Tower instead of joining their group. Faragonda asks Stella if the Trix have caused any major problems for them but Bloom specifies that they are not entirely sure, however, the three witches have not bothered helping them either. Faragonda apologizes again but she reminds the girls that the Fortress of Light Council forced her to include the Trix into their group. She tells the girls that everyone has an enemy that will hinder their progress but she is confident that the Winx will do fine. She then reminds the girls that she added the boys from Red Fountain in order to even up the score and Bloom thanks Faragonda for the decision. She then explains that the boys were the ones that helped train the new Knights of the Star, which helped convince King Thordal to allow them to carry out their plan.

The Knights of the Star have sworn to protect the kingdom's people and preserve the peace; the star symbolizes that all of the men, including the king, are equals fighting for the same ideals. Faragonda asks if this newly formed knighthood works and Bloom insists that it does, telling the headmistress that each of the knights roam around the kingdom and do fantastically heroic deeds every day since the knighthood was formed!

Somewhere else in the kingdom, Sir Helfred is riding around on his horse until he spots some trouble at a nearby house. A small group of thieves is trying to steal a cow from a poor family as they threaten the daughter to not scream or else they will take her life with the cow. Helfred rushes in on his horse and orders the thieves to stop what they are doing. The thieves laugh at Helfred, convinced that one man cannot stand up to all four of them, and one of the thieves shoots at him with his crossbow. Helfred manages to block the arrow with his shield and charges at another one of the thieves that have mounted their horse. He knocks the thief off of his horse and bashes the other one with the crossbow over the head with a mace. The other two thieves make a run for it and the poor family is now safe. Helfred assures the poor man that the thieves are less likely to come back after all of that and the man thanks Helfred for saving them. The man's daughter then asks Helfred if he is a Knight of the Star, to which Helfred confirms. The daughter takes off her red bow and ties it around Helfred's spear, hoping that it will help Helfred remember her. Helfred thanks her for this and promises to come running if she needs help. He then rides off, bidding farewell to the family he had just saved.

In town, the people are all amazed by all of the deeds the Knights have done. One woman tells a few people that the Knights managed to stop another bandit attack and a scrawny man claims that, in his brother's kingdom, one of the Knights defeated a dragon. Another man mentions that, in the Northern County, the Knights have captured an prison escapee and the woman exclaims that the Knights are true heroes. Just then, another person in the crowd points out that Helfred has returned and the kingdom's people cheer for him as he makes his way back to the castle.

When he makes it there, he is greeted by his fellow knights and the Specialists. It turns out that the Specialists are training men who have come wanting to become new Knights of the Star and Sky is certain that King Thordal will be pleased with the progress they are all making. Bloom and Stella spot that Helfred has returned from a watchtower and that the boys seem free for now, so they rush down the tower to catch up with them. When they catch up to the boys, Sky tells Bloom that he has a surprise for her and hands her his backpack, claiming that Faragonda tasked him with delivering some documents to King Thordal. She also added a little extra to the bag and Kiko pops his head out from the bag. Ecstatic, Bloom takes Kiko and plays with him until Timmy tells everyone that the king and queen are arriving. Everyone gathers around as Queen Electra and King Thordal arrive. Helfred kneels before them as Thordal claims to have heard of Helfred's latest exploits. Helfred insists that it was nothing major as he just took care of some bandits trying to rob a family. Thordal leans in to ask if Helfred thinks that the bandits were really just simple bandits and Helfred claims that he thinks they were not as they were very well armed. He then suspects that the bandits were most likely soldiers of a nearby lord, which confirms Thordal's fears. Thordal believes that many of the lords within the kingdom still do not accept his authority but Sky cuts in to clarify that the lords may be against the Knights of the Star, not the king. He reminds King Thordal that the Knights fight to protect the weak, behave with justice and honor and do not seek wealth; all things that the nobles cannot do without losing all of their privileges and power. Thordal does not understand why the lords would be so resistant towards the Knights as everyone is living better lives and Sky proposes that they continue to train aspiring knights so that none of their enemies can oppose them. Thordal agrees with Sky's plan and Electra believes that it will all go well so long as the newer Knights are as valorous as Helfred, their first knight. Helfred claims that Electra is being too kind to him and kisses her hand.

Meanwhile, the Trix are watching everyone from the roof of the castle and they cannot stand how everyone is exchanging smirks and compliments. Stormy cannot stand how the Winx have been able to accomplish everything up until now and Icy even admits that it will be tough getting passed them and the boys. Darcy asks whether Icy has any more plans for them or if they are simply going to give up and Icy clarifies that certainly are not going to give up. She adds that it will not be easy finding a way to make the Knights of the Star crumble and Stormy is not even sure if they can, as the Knights are so perfect and fearless. Darcy adds that the Knights never yearn for money and Stormy adds that all the Knights want to do is fight for glory and honor. That is when Icy comes up with an idea: to prove to everyone that the Knights are not all what they say.

Stormy tries to remind Icy that corrupting the Knights will not work until Icy interrupts her and points down to Helfred and the queen. The two seem awfully close which causes Icy to suspect that they may be in love and proposes that they use this to their advantage. If Helfred and Electra were to betray Thordal, then Thordal would lose all hope in his Knights and he would have the Knights of the Star disband. As the three witches make it to another room, Darcy asks how they will be able to go about their plan. Icy claims that they cannot do it directly or else they would be arrested for criminal acts against the king. The three witches come across a portrait of Thordal, Electra and their former adviser, Count Sargon, and Icy reminds her two sisters that thanks to the Winx, Thordal no longer listens to his advice. Stormy wonders where he could have gone and Icy reveals that she saw him leaving earlier that morning. She further suspects that Sargon may be in cahoots with Baron Gruwald, the leader of the rebellious noblemen. Icy's hunch turns out to be correct as Sargon is currently at the baron's castle with Baron Gruwald going ballistic over how Helfred had almost killed one of his men and his son, Arel. 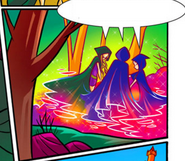 Cloak us now in black, make the night dark. We'll do our wicked deeds, leave our evil mark...

...Demons and fire of passion, gather 'round me! Sickly love that destroys the heart, I release you now to work your art! Enslaving Helfred to his queen and, by the king, soon to be seen! 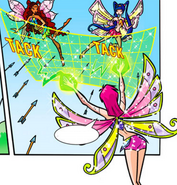 Energy Shield!
Add a photo to this gallery

Retrieved from "https://winx.fandom.com/wiki/Issue_49:_Love_Betrayed?oldid=476111"
Community content is available under CC-BY-SA unless otherwise noted.