Magic Holiday is the sixty-fourth issue of the Winx Club Comic Series.

The top students from the three major schools of Magix gets to enjoy a week's vacation at a wonderful resort realm as Headmaster Saladin has to present a new form of magic that will be beneficial to the realm. Meanwhile, a pair of fame-hungry stars decide to stir up a scandal as the Trix are tasked with stirring up trouble in order to make Saladin look bad in front of the Fortress of Light Council. Will it really feel like a vacation?

It is a fine day at Alfea, when Musa returns to the Winx dorm with some wonderful news! The Fortress of Light Council had their conference on superior magic moved up to next week. Many professors from schools all over the Magic Dimension will be presenting their latest magical studies to thousands of their colleagues, meaning that their professors will be too busy preparing notes to do anything else. Stella rejoices at the fact that their professors will be too busy to grade their anathematics homework and Bloom realizes that the conference will be something sort of like an exam for their professors. Musa agrees and further explains that all of them will be showing their colleagues their most recent magical studies. The one who presents the best magic will receive some sort of oscar and the word on the street is that Headmaster Saladin is most likely to win. Tecna asks what this all means and Musa reveals that the superior magic conference will be held in a realm called Holiday Beach. Stella begins to get excited as she recognizes Holiday Beach as a realm with one of the most beautiful beaches in all of the dimension and wonders how the Fortress of Light Council was even convinced of spending so much to hold their conference there. Musa then reveals that the principals have all asked the Council if they can bring their best students along for the trip and asks if any of the girls know who Faragonda requested to join her. Stella asks if it was them and Musa confirms this, adding that Sky's team of Specialists was chosen to accompany Saladin.

And so, later that day, the Winx and Specialists leave for Holiday Beach.

All together, you must combine... Modern heroes to design! 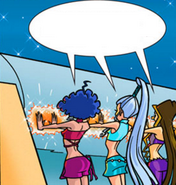 Spread the dark magic, bring anguish and panic. Bring up horrors from the deep, tragedy and terror reap! 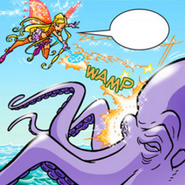 Sound Waaaaavvve!
Add a photo to this gallery

Retrieved from "https://winx.fandom.com/wiki/Issue_64:_Magic_Holiday?oldid=476596"
Community content is available under CC-BY-SA unless otherwise noted.