The Dispute is the sixty-sixth issue of the Winx Club Comic Series.

The Winx travel to a farm that belongs to the family of Flora's old friend, Jessie Hellend, as Jessie had requested their help. It turns out that the Hellend Family has been engaged in a heated land dispute with the Mallen Family and tensions between the two have begun to boil over. With help from Flora and her friends, Jessie hopes that they can help her put an end to the dispute before it can get any worse.

The story opens up at Alfea, where the Winx have been called up to Faragonda's office. There, Faragonda asks if Flora remembers someone by the name of Jessie Hellend. Flora confirms that she does as she and Jessie were friends before she left for Alfea, and she begins to fear that something has happened to her friend until Faragonda dispels her worries. She then reveals that Jessie had requested that the Winx help her with a family problem, however, Faragonda does not know what it is specifically so, for the moment, Faragonda decides to send the Winx over to Jessie's home in order to scope out the situation. Flora asks whether they all agree to it and, once they do, Faragonda agrees to send them over by tomorrow morning. She then wishes them well as the six fairies leave her office.

As the Winx make their way back to their dorm, Stella rejoices over getting to miss their potionology test, however, Flora is still worried over what could have happened to Jessie as she remembers her being a quiet and shy girl. She figures that the situation must be more serious than they realize if Jessie had to resort to requesting help from Alfea until Bloom reminds Flora that they do not even know what the problem is just yet. She tries to assure Flora by telling her not to worry about it until they find out and Flora agrees, realizing that Jessie's home realm is not too far from Magix. She then begins to get excited over getting to see her old friend again.

Tomorrow comes sooner than expected and the Winx quickly arrive at Jessie's family farm, where Jessie is waiting for them. Once the shuttle lands, Flora rushes out to see her old friend, who is just as eager to see her. As the rest of the Winx get off, Timmy reminds Tecna to call him once they are finished so that he may pick them up. Tecna thanks Timmy as he gets back into the shuttle and flies off.

Jessie and Flora hug each other tightly as they comment on how the other has grown since they were kids. Flora then introduces Jessie to the Winx and Jessie offers to take them to her house to rest up on a horse-drawn carriage. After a bit of breakfast and a change of clothes, Jessie and the Winx head off for the farm.

As the seven of them get into the carriage, Flora wonders why Jessie and her family still bother to use it as there are more modern ways of transportation now. Jessie reveals that it is due to her father's stubbornness as he is more fond of simpler technology, though, she admits that she and the rest of the farmers only use more modern technology for heavy farm work.

Jessie continues to show the Winx around her family's farmland as the carriage continues down the path until Stella notices that there is barely any water flowing through the nearby river. She asks Jessie why that is and Jessie explains that the river's current condition is the problem as their fields need more water, but there has been less water coming through every season. She fears that all of their work will have been for nothing once the river has gone completely dry and Stella promptly apologizes, trying to reassure Jessie that she understands her predicament. She suspects that Jessie called them over to make it rain through the use of magic, but Jessie does not believe that that is all that is wrong. Just as she tries to explain, Tecna interrupts her once she notices something going on nearby. 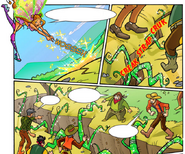 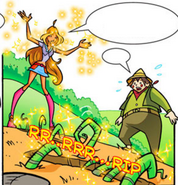 Twisted roots, give us a hand! Same as before, fill the land!

Power of the Forest! 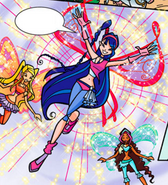 Power of the Sun!
Add a photo to this gallery

Retrieved from "https://winx.fandom.com/wiki/Issue_66:_The_Dispute?oldid=494195"
Community content is available under CC-BY-SA unless otherwise noted.