Perfume and Magic is the seventy-third issue of the Winx Club Comic Series.

The Winx have been sent to Hoggarth College for two weeks by Faragonda as a group of exchange students to see how the school conducts itself. Upon arrival, the Winx are disappointed to see how polluted and dirty the nearby city is, but the countryside remains clean and beautiful. The group also meet a perfumist named Gustave and his wife Lilliane. During their stay in Hoggarth, the city erupts in protests against Napoleon Codifer, the man in charge of all of the factories polluting all of the air in the city. In order to distract the protestors, Codifer has his men kidnap Lilliane to force Gustave into producing pleasant-smelling smoke and, later, a cologne that will make people do whatever he says. It is now up to the Winx to stop Codifer before he can abuse this special cologne and rescue Lilliane and Gustave from his clutches. 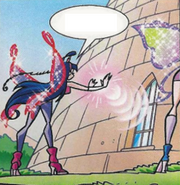 Ultrasonic Wave!
Add a photo to this gallery

Retrieved from "https://winx.fandom.com/wiki/Issue_73:_Perfume_and_Magic?oldid=494299"
Community content is available under CC-BY-SA unless otherwise noted.