Hopes and Disappointments is the seventy-seventh issue of the Winx Club Comic Series.

Still anxious over the ever-escalating war on Eraklyon, Bloom worries that Sky may be unable to remain loyal to her as she is with him after their relationship had been called off. Luckily, an end-of-the-year trip to the mountains seems like a nice break from her worries for both her and Stella, who was especially devastated by Brandon's leave. However, things take a surprising turn when Stella meets up with an old friend and a new love. When Bloom confronts Stella about this, Stella reveals that she barely thinks of Brandon anymore and does not wish to wait for him when it is highly possible that he can never come back. Meanwhile, as Stella tries to further this new romance of hers, a pair of scheming adults try to harm the local wildlife.

It is another normal day at Alfea where Bloom still finds herself worrying over Sky's safety. She is brought out of her thoughts by her diary who tries to cheer her up by suggesting that the war on Eraklyon may be over soon. Unfortunately, this does not help lift Bloom's spirits as, even if the war were to end earlier than expected, she still has not heard a word from Sky for months and fears that he may have forgotten about her already. Bloom's diary insists that both Sky and Brandon will return to Magix safe and sound and everything can resume as it normally did, but Bloom still cannot bring herself to believe such words; not after what she saw on TV.

When her diary asks what she saw on TV, Bloom reveals that she and the rest of the Winx caught another report on the Eraklyon War where the northern mountain region that the king and his army of loyal subjects quickly became surrounded by the rebels, who are still being backed by the neighboring kingdom of Karunda.

Though Prince Sky has held up impressively, the biggest problem for his forces is getting the necessary supplies to continue fighting back. King Erendor has politely asked for help from neighboring kingdoms and all of them have responded by sending in the necessary material, as well as more troops, showing that the war is far from over.

After catching the report, all the other Winx girls set their eyes on Bloom, who progressively gets more anxious after catching a glimpse of Diaspro among the soldiers aiding Sky and his father. Aisha tries to ease Bloom's worries but Bloom becomes angry with herself as she is stuck unable to do anything while someone like Diaspro is even able to help him so closely.

She expresses these worries to her diary, certain that he understands why she has become so hopeless with her situation, but her diary insists that she should trust Sky more. Before he can finish, Bloom interrupts to remind him of how she was made free from her relationship with Sky and, though she intends to remain loyal to Sky, she wonders if the same applies to him. She then claims that she must forget about Sky and give him up though, she is more worried for Stella, who most likely has to do the same with Brandon, as she is an even worse wreck than Bloom currently is.

Bloom's diary tries to lighten the mood by insisting that she and Stella could find new boyfriends in no time thanks to their youthful beauty, but Bloom is not interested in any other guys but Sky. Her diary then begins to fawn over the romanticised ideas of falling in love again, but Bloom could not find a reason to care about that and is even disgusted by the idea! Her diary then suggests that she and the Winx take a vacation to somewhere exotic, but is caught off-guard when Bloom claims that they already have one planned. Bloom then reveals that Faragonda sends the girls up to the mountains at the end of every school year and explains how they just walk around and have bonfire parties among other things when asked. 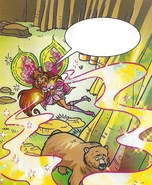 Quickly grow long and strong, roots that will keep you still without causing any pain.

Calm down, be quiet, and go to sleep; the pain is no longer there.

Energy Shield! and Plasma Blocker!
Add a photo to this gallery