Bad Dreams is the eighty-fifth issue of the Winx Club Comic Series.

Bloom is having a nightmare about the Wizards of the Black Circle escaping their imprisonment in the Omega Dimension. She is awaken by Flora, and in the morning she relates the terrifying dream to her friends. Roxy then reveals that she too, has been having terrifying dreams. It starts out with her meeting up with her parents and seeing the Frutti Music Bar, but then, it bursts into flames. In her dream, she hears a horrifying laugh that startles her enough to wake up, shaking in fear.

Now, it is clear that this is no coincidence and the girls decide to alert Faragonda of the Wizards possible escape from jail. Faragonda calls the Fortress of Light, and the guard informs both Faragonda and the Winx that the Wizards are still serving their sentence. Although it is good news, this does not ease the girls' concerns. And so, Faragonda decides that they should go back to Earth and check. She also explains that, although magic has just returned to the planet, its powers are not completely stable and needs to be checked. Before heading to Earth, the girls alert their teachers to ensure no assignments are assigned while they are on a mission.

Then, they proceed to Earth through a portal at Alfea. They first visit Vanessa, who is delighted to see them. Bloom asks if there has been any strange activity, and Vanessa answers no but she does tell the girls that there is some commotion going down at Love & Pet and that they should check it out. The girls say goodbye to Vanessa for now and head there.

While walking there, Bloom notes that the new girls they had hired for the shop could be possible Fairies who could attend Alfea, something Roxy believes Morgana would be excited about. When they arrive at the store, they see that it is just as busy as when they had left it. When they get inside, it is even busier than they thought and the new store owners are bombarded with impatient customers. Seeing this, Stella freezes the customers, and the new owners, Carmen and Cindy are delighted to see them. They let them know how the store has been fairing and every day it is still extremely busy. Cindy then turns her attention to the still frozen customers and worry if they will become angry once they get out of this state. Bloom and Stella assure them that the customers will not remember a thing. And Stella shows Carmen and Cindy how to unfreeze one of them; now making it easy to deal with the customers, the new owners get back to work.

The Winx now head for Frutti Music Bar, to the excitement of Roxy. But, when they arrive, they see that the bar looks completely deserted and damaged. Musa notices the burnt scars on the walls and it is then that Roxy realizes that her nightmares came true. Now anxious, Roxy is desperate to see her parents. Stella calms her down and they head for her house.

Thankfully, Roxy's parents are alright as Klaus comes to greet his daughter and her friends. Roxy asks her father what had happened to the bar and he informs her that some people strange people showed up one night and then the next day, the bar was in flames; the bar is currently under repairs. When they enter Roxy's house, they see Morgana sitting on an armchair, weak and exhausted. Roxy, now even more worried, questions her parents as to why they had not alerted her; Klaus reasons that he did not want to worry her. He says Morgana will get better and that the situation with the bar will be figured out soon.

Bloom then asks if there were any other competitions nearby that may have set up shop. Klaus says yes, and the new bar is called Cocoa Dancing. He does not know who the owner is but the bar is popular. Having such suspicious timing, the Winx head for the new bar to investigate.

Once there, they enter and see their friends: Andy, Rio and Mark performing on stage, and Jason Queen, socializing at a table. This is unexpected to the Winx who would have never thought they would so easily ditch the Frutti Music Bar, especially since Jason is Klaus' friend.

Musa decides to speak to Jason and greets him but to her surprise, it appears that he does not remember her. But Bloom senses something - the bar is a trap! The people at the bar then turn into monsters and start attacking the Winx but are eventually defeated. It is clear that this place was a fake and they conclude that the Wizards are definitely the culprits: this bar, the monsters, the break in at the Frutti Music Bar and the stealing of Morgana's necklace. Roxy is now determined to find her mother's necklace, but with little evidence that this was the Wizards' doing, the Winx use Tracix to see into the past.

The Tracix allows the girls to see that the Wizards had been freed by a new foe, who is now their master. This new foe is now plotting to destroy all forms on magic on Earth that will hinder his own power. With this newly found information, the girls need to remain strong until the next battle. 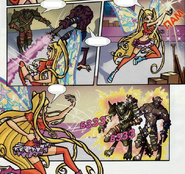 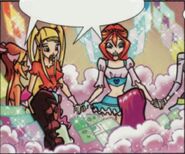 The power of Tracix will spread like the wind in the air, as the wave in the sea, remember that event that lead to thee.
Notice Roxy's Tracix wings.
Add a photo to this gallery

Retrieved from "https://winx.fandom.com/wiki/Issue_85:_Bad_Dreams?oldid=494176"
Community content is available under CC-BY-SA unless otherwise noted.