Kyral's Test is the eighty-eighth issue of the Winx Club Comic Series.

Not willing to put in the effort to pass a test, Kyral decides to find an easy way to pass it. When she tries to speak an incantation that will help her with knowledge she misspoke and now a rampaging elemental golem threatens the safety of her classmates and teachers.

It is almost time for class and Roxy is already ready in a rush to head for class, unlike her roommate, Kyral who is just taking her time. When they finally walk to class, Roxy is reminding Kyral that the test on elemental magic is within one week and Kyral will fail if she does not start studying now. Kyral does not stress about it, much less care. Roxy even points out that the class is difficult even for the Winx fairies.

They enter the classroom, and Bloom is tutoring another fairy, Yomi, on how to control the element of fire. Bloom encourages her to trust her instincts and Kyral makes a mockery of Bloom, who thinks she is all so high and mighty. Roxy defends her friend, saying that she is one of the best Fairies.

Then, Professor Zyron, enters the classroom and silences the noise. He is about to discuss the exam when Kyral rudely makes audible comments of the subject being a bore. Having enough of her attitude, Zyron asks her to share her knowledge of the subject, and of course, she cannot and is humiliated. Zyron warns her to start focusing, otherwise her grades will slip further than it already is. This infuriates Kyral and she angrily rejects Bloom's offer to help.

A week later, Kyral has had enough of studying and goes to sleep. Roxy tells her that it is unwise to not study even a little but Kyral tells her not to worry about it because she has an solution.

The next day, the Winx (even Stella) are scared about the test, despite studying a lot. And within a few minutes, the test will begin; however, Roxy and Bloom notice Kyral walking somewhere. Roxy would like to know what she plans to do; she also lets Bloom know that this is not the first time that Kyral had disappeared, only to return to take a test and pass with good marks.

While everyone enters the classroom, Kyral sneaks into the library, searching for a book that contains a spell which will provide her with all the information she needs to pass the test. She finds the book locked in a power grid, amongst other rare and dangerous books, preventing anyone from stealing them.

Kyral is still able to break the book out of the holding cell, when Barbatea catches her and demands that return the book to the power grid. Barbatea snatches the book back and is now ready to take Kyral to Faragonda's office to receive her punishment. But, Kyral is too determined to let that happen and shoves Barbatea, then miniaturizes her with magic. This leads Barbatea to fall into a trash can and fainting. Now that Barbatea is out of the loop, Kyral excitedly opens the spell book of instant learning. She finds the section for elementalogy but is presented with a problem: the last word is illegible. If she says it wrong, the spell will backfire and cause problems.

In the classroom, the test is being handed out when Roxy asks Zyron to wait for Kyral. Zyron is firm on not waiting, and as the test is about to being, a golem breaks down the classroom wall. Zyron hurriedly tells his students to flee to safety, when the golem zaps a powerful beam at Yomi, who ends up stunned.

Zyron drains some of the golem's energy but tells everyone to escape as it is dangerous. But the Winx are determined to defeat it and transform to do battle. Zyron is completely against it as they will not be able to defeat the creature, but the Winx do not budge and stay to try and defeat the golem; everyone flees the room, all while Kyral is witnessing the whole ordeal. She beings to regret her decision to have tried to say the spell, all for the sake of not wanting to study but still wanting to pass the test. She "flees" along with the other students but is thinking about telling the other teachers and Faragonda of what happened. However, she is more concerned that she will get expelled, so she chooses not to.

Meanwhile, the Winx try their best to defeat the golem but ultimately, their efforts were all in vain. Not only that but the golem also absorbs their energy, making them weaker. The girls then head to Faragonda's office and relate to her the situation. Professor Zyron is also there and the girls ask him what that creature is. He explains that it is an ancient monster and can only be evoked by an extremely old and dangerous spell. For the safety of others, the Winx decide to use themselves as bait, while Roxy helps with the evacuation.

The girls search for the monster, and eventually locates him as he surprises them, the monster breaks down the classroom wall and Rachel, one of the Winx's classmates did not escape yet because she was too afraid to. Stella tells her to quickly leave while the Winx try to attack it once more.

Outside, in the quad, everyone is waiting for the Winx, when Rachel relays the Winx's plan to Faragonda, Zyron, Roxy and Kyral: they plan to trap the monster in the library. Kyral then runs to the library because she had forgotten that Barbatea was still in there and now, she is in danger.

The Winx are able to trap the monster in the library, and as the golem bashes against the door to be set free, the noise awakens Barbatea and she returns to her normal size. Unfortunately, the golem also found her and she screams. The Winx hear the scream but the golem breaks the door down and knocks the girls unconscious. Kyral appears just in time to see what happened, and panics; thinking what she should do when realizes that miniaturizing it will reduce its strength and so, she casts the spell. The golem is now small and harmless and to prevent him from moving, Kyral puts up a force field around it. When the Winx applaud her smart thinking, Kyral confesses that it was her who had evoked the golem. Barbatea then lets her have it, telling her that she will be expelled. But the Winx defend Kyral. Sure, she made a mistake but in the end she came through and protected everyone. Barbatea eventually is convinced not to report her but will still be watching her.

After the incident, the test is pushed further a week and the results of the test come in. Kyral looks upset, and Roxy wants to know why. The good news: Kyral passed! She is just upset that she did not get a higher mark since she was studying vigorously with Roxy. However, Roxy encourages Kyral and praises her considering she did save them from the golem. Roxy believes that Kyral will one day become an extraordinary fairy. 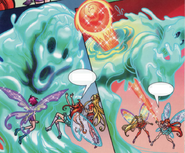 Morphix Wave! and Winter Rose!
Add a photo to this gallery

Retrieved from "https://winx.fandom.com/wiki/Issue_88:_Kyral%27s_Test?oldid=515486"
Community content is available under CC-BY-SA unless otherwise noted.