Issue 8: Heart of a Fairy

Heart of a Fairy is the eighth issue of the Winx Club Comic Series.

Musa's feelings for Riven have bled into her dreams and her conflicting feelings for Mitril, a young interdimensional adventurer who wishes to win her heart, are not making things better. At the same time, Bloom learns of Madame Greta's personal tragedy being the reason for her crabby and jaded personality. To give Greta some closure, Bloom decides to take matters into her own magical hands.

At Alfea, Musa is having a nightmare about Riven. Finding him covered in a cloak, Musa follows him only to come face to face with Darcy, who hides Riven and pushes her off a cliff. Just as she is fearing her death at the bottom of the cliff, Musa is awoken by an odd noise.

She wakes Tecna up and rushes towards the balcony, where she finds Mitril tapping on the glass door and lets him in. The rest of the girls wake up because of the noise. Mirtil then explains that he would like to take Musa out on a trip the next day and that he likes her. He mentions that he can travel between dimensions and urges Musa to come along because he thinks that studying at Alfea is boring. Although, Stella also tries to convince Musa to go out with Mirtil, Musa kindly rejects his offer. That morning, Bloom starts narrating the incident to her virtual diary on her desktop. The next day, the Winx and Specialists meet up at the White Horse.

Bloom leaves to work in the cafe while the rest try fixing the boat. Brandon goes back into the cafe, asking Bloom for bandages because he got a splinter. As Bloom looks for bandages, she accidentally drops a case full of letters. She gives them to Greta and helps Brandon with the bandage. Later, as Bloom is cleaning tables, an old customer named Mike tells Bloom about the letters she had given to Greta. It turns out that years ago, when Greta was a young girl, she was in love with a certain man named Willis, who traveled dimensions. She even left Alfea to be with him. So, while Willis traveled dimensions, Greta managed the White Horse. He used to write her letters but, after some time, the letters just stopped coming. After about five years, she came to know that Willis had died in an accident during one of his travels. Mike confesses to Bloom about his love for Greta but claims that "only a fairy's magic could change her." During all of this, the Winx girls and the Specialists finally fix up the boat.

Back in the cafe, Bloom takes the letters and tosses them into her backpack. She leaves early, heading for Alfea. There, Bloom tries to find the spell for Greta. Stella enters the library and asks for an explanation from Bloom as to why she's cooped up in the library on a Saturday night. Bloom avoids tells Stella of the real reason why she's there by making up an excuse and asks for her help. After they find the book, Bloom makes Stella leave. She then performs a spell on the letters. This spell would help her create a new letter but it would be incorporated in Willis's writing and style. With a little more magic, Bloom is able to make the letter look as old as the others.

The next day, the Winx leave for the White Horse but leave Bloom behind because she returned to their dorm later in the night and was still asleep. Later, at around 12, Bloom heads for the cafe and puts the old letters back into their original places. She drops the new letter into a big crack in some furniture, which could be easily seen, and asks her co-worker Charlie to get it out. Charlie hands Greta the letter and Greta assumes that she had missed it. She opens the letter where it explains that Willis was counting on coming back from his expedition, restoring her faith in her lost love.

Later, Bloom joins the rest of her friends, where Timmy tells them that Greta had organized a party. Stella soon comes to realize Bloom's plan. The Winx and Specialists later attend the party, where it seems like Greta is back to her old self.

"Letters, syllables, whole words... Take flight and come to life... Choose a phrase, with different words a different conversation, but the same style before! Willis's mouth can no longer speak but what you read will seem to be his... Style, scent, expressions it is Willis that Greta must hear!"
Add a photo to this gallery 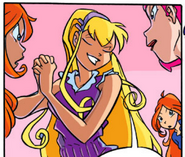 Flora colored in with Bloom's color palette (bottom-right).
Add a photo to this gallery

Retrieved from "https://winx.fandom.com/wiki/Issue_8:_Heart_of_a_Fairy?oldid=475280"
Community content is available under CC-BY-SA unless otherwise noted.