Adventure on Zenith is the ninetieth issue of the Winx Club Comic Series.

The Winx travel to Zenith's capital, Future City, on the request of King Cryos for a celebration. Upon their arrival, the Winx walk in on a presentation for new robot guardians, but unfortunately, as efficient as the robot centurions are, they are very hostile and perceive any sort of physical contact as a threat. The Winx step in to stop the rampaging robot but Tecna is turned into a titanium statue in the process! Fearing that the effects may be permanent, the remaining Winx fairies search for an old hermit named Stylius as he is the only one who has a chance at freeing their friend from a lifetime of petrification.

The Winx arrive in Future City, the capital city of Tecna's homeworld of Zenith, and are greeted by a robot Tecna had created in her youth named Byte after landing. As the Winx walk through Future City, Byte tries to catch up with his creator, wanting to know if she had a safe trip. Tecna assures Byte that she did, but she wonders why Byte came to their landing site, as she could have found her way home easily. She is then cut off by her mother, who appears behind them as she tells Tecna that Byte was just eager to see her again. The two of them hug each other as her mother reveals that Byte had been wondering when Tecna would complete him. Tecna assures her mother and Byte that he is in great shape as he only needs a few new parts, nothing major. Her mother then asks the Winx over how long they plan to stay in Future City. Bloom tells her that they will not be staying for long and Stella reveals that they have been invited over by the Supreme Council of Zenith to a very important event. Surprised, her mother asks whether or not something serious had happened until Tecna clarifies that they will be attending a celebration and Bloom adds in that they must attend immediately as the Magic Dimension's newest Guardian Fairies.

And so, just a short while later, the Winx are given a ride to the Enlightened Government Plaza of Zenith by Byte. Tecna offers for Byte to come inside with them, so he takes her up on that offer and the seven of them head inside. There, they find that King Cryos had invited many ambassadors from all over the Magic Dimension and all of them are watching a man in a lab coat getting ready to present something. The man on stage goes on about how his latest prototype will have cutting-edge arsenals guided by the latest generation of artificial intelligence. From the back of the crowd, Stella begins to get confused and playfully asks for someone to translate the scientist's technobabble. She is simply told by Tecna to quiet down as technical talk like his is only typical speech for the people of Zenith. She further explain that the man on stage is named Tyron and that he is one of the leading experts in robotic technomagic. Just then, Tyron lifts the sheet from his presentation and reveals to the crowd that his prototype is for the newest generation of robot guards, simply called the "Sentry Robot." Musa wonders if they came all that way just to see a robot as Tyron continues explaining the Sentry Robots various advantages over the older robotic guard models, such as how the Sentry Robot comes with a built-in emotional chip. May of the fellow inhabitants of Zenith marvel at Tyron's Sentry Robot except for King Cryos, who seems to be remaining skeptical of it. Stella also cannot help but see something scary about it. 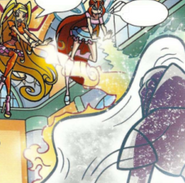 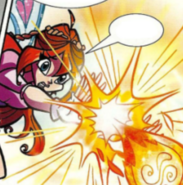 Stereo Crash!
Add a photo to this gallery

Retrieved from "https://winx.fandom.com/wiki/Issue_90:_Adventure_on_Zenith?oldid=515489"
Community content is available under CC-BY-SA unless otherwise noted.