Fairy for a Day is the ninety-sixth issue of the Winx Club Comic Series.

The Winx are trying to figure out who is lending Beth McGraw destructive powers. Beth misuses them to attack not only her bullies but also innocent people. As it turns out, the Trix are meddling again and this time, want to rid Earth of positive magic and reinforce it with negative magic. To do this, Beth is being used as their pawn.

It is a normal shopping day in Gardenia with loads of sales. Bloom is with Mike and Vanessa at the department stores, wanting to buy a new micro-phone for Tecna. However, their normal shopping day comes to an end as the department becomes a target for destructive spells cast by a girl on a rampage. She angrily attacks everyone in it for not noticing her. Bloom transforms to protect the people. The girl then ignites a nearby store which shatters the windows and endangering everyone inside.

Bloom quickly controls the fire, and the shoppers escape with some minor cuts and bruises. They thank Bloom, when a man named Peter approaches her, he explains that the girl was Beth McGraw. However, he tells Bloom that this is not her usual behaviour as she was rather studious, quiet and often alone; he then gives Bloom her address. Bloom needs to get to the bottom of this and tells her parents that she will see them later.

After the incident, she is at Love & Pet and explains everything to the Winx. They decide to get to the bottom of this, and split into two groups. Stella, Roxy and Bloom will head to Beth's house, while Musa, Flora, Aisha and Tecna head for Beth's school.

Stella, Roxy and Bloom inquire about Beth from her parents, Mister and Missus McGraw. Under the pretence that they are her friends, they tell the two what they had witnessed at the mall and were concerned. Mister McGraw tells the girls that while she has great academic performance, she is closed off and refuses to speak to anyone. As he was about to go into detail his wife stops him, frantically trying to cover up any obvious issues and politely chase the girls out of the house. The girls are now certain that they are hiding something.

Meanwhile, at Beth's school, the others are also trying to inquire about Beth from her classmates. As it turns out Beth was absent, and many of her classmate exhibit a hostile attitude towards her, saying that because she is so studious and closed off, they regard her as unapproachable. One of the students goes into detail: she went crazy one day and declared vengeance on those who bullied her by becoming a fairy for one day.

Then Stella, Roxy and Bloom meet up with the others, and compare notes: all of them learned that Beth is not very social. All of a sudden, part of the wall that was enclosing the school is blasted off and Beth steps in. Blasting anything and anyone, particularly the ones who had teased and taunted her. The girls transform to deal with Beth but her powers are much too strong and as Musa points out: negative.

Using the backwashing tornado spell, Beth entraps the Winx in a tornado. Beth then basks in her success on overpowering the Winx. The students then express their admiration of Beth's power, which then fuels her own powers. With her focus now turned to her admirers, her tornado dissipates and drops the Winx. The girls wonder why their Believix powers were not working. And to make matters worse, the students blindly defend Beth, saying that seven fairies against one was unfair. Flora tries in vain, to reason with them, considering she almost hurt not only the school but them as well. Bloom notes that the negative energy is influencing the students' judgement, unaware that the Trix are monitoring them elsewhere.

Back at the Winx's home, with Stella complaining about her hairdo being in complete disarray, the girls suspect that someone is trying to spread negative magic on Earth through Beth. Should they succeed, the Winx's will lose their Believix powers. It is vital that they solve this issue and so, they begin with getting answers from Beth's parents.

As sunset approaches, Beth is on a beach; she walks over to a frightening looking cave. The Trix were the ones who lent her their powers, and since the day has ended, Beth's powers are revoked. It seems that Beth enjoys having them and so, the Trix uses her weakness and offers her deal: to keep them forever by accepting negative magics. They allow her to think about it and should she accept, she must meet them here at midnight.

Beth walks off, and heads home. On the way home, she is tempted to accept the offer but feels that there is something off about them despite their honesty. When she arrives home, she overhears people talking to her parents and peaks through the window. The Winx have explained what their daughter had done to her parents, and they feel so ashamed for not having the courage to be there for her; believing that they had failed her, the two burst into tears. Seeing this, Beth starts to reevaluate her decisions.

Roxy is able to comfort the parents, and once they are calmed, the girls asks them if anyone, who possesses magical abilities, have approached Beth. The parents say there were and help deduce who these people were: the Trix. With this answer, the Winx need to put a stop to their plans but Beth yells at them to not interfere with her life and that they have no right to take her friends from her. Beth then runs to the Trix. The Winx give chase but stop, and keep their distance so that Beth could lead them to the Trix.

Beth makes it to cave once more, and this time the Trix reveal themselves. Beth accepts their offer with determination. As they are about to make the exchange the Winx show up to stop it. Annoyed by their constant interference, Icy has a plan and imbues Beth with negative magic. Beth attacks the Winx but Flora blocks it and counterattacks. Bloom then sternly reasons with Beth, she is not alone: her parents, classmates and Peter all love her, but it is up to herself to be positive and not fall into negativity. Upon hearing that Peter loves her, Beth comes to her senses, and with Bloom comforting her as we all make mistakes, Beth comes to terms with her actions. The Trix try to persuade her again but it does not work this time, leading to Beth using her powers against them, only for Icy to take them back. Tecna however, defeats them and Bloom sends them running. Beth is now happy about the way she is, with Bloom affirming that she is unique in her own right. 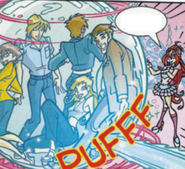 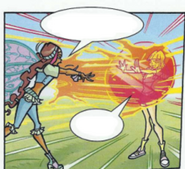 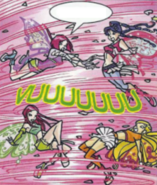 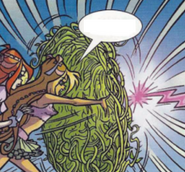 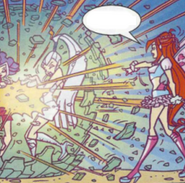 Fire Arrow!
Add a photo to this gallery

Retrieved from "https://winx.fandom.com/wiki/Issue_96:_Fairy_for_a_Day?oldid=499492"
Community content is available under CC-BY-SA unless otherwise noted.