Issue 9: A Job for Bloom

Season 1 Arc
A Job for Bloom is the ninth issue of the Winx Club Comic Series. Originally released in 2004, it was later re-translated and included in the VIZ Media volume Winx Club Vol. 3: The Magic of Friendship.

As a sign of gratitude for helping her reconcile with her mother, Stella gives Bloom a magical diary. Bloom is grateful for Stella's gift and get used to the diary fairly quickly, but she is still facing her own set of problems, as she is having trouble keeping up with everyday expenses. Musa also shares the same problem and the two go job hunting. Musa ends up working for the school's librarian, Barbatea and helps her clean out the old tomes of an ancient section of the library that was somehow reopened. On the other hand, Bloom is not so lucky as she had been searching for a job all day and was rejected at every turn. The next day, Bloom applies and, later, competes for a job opening at a café called the White Horse, while Musa tries to get closer to Riven since he and the Specialists were tasked with helping clean out the ancient library section as there may be monsters lurking.

As the story opens at Alfea, Stella gives Bloom a thank-you gift for helping her reconcile with her mother. The gift is a diary which also happens to be a talking computer. After a bit of teasing from her new diary, Bloom tells it about how she was given a scholarship for Alfea but still needs a job to pay for her everyday expenses.

Meanwhile, a wall collapses in the Alfea Library, revealing an extra room with piles of books. Musa, who is also in need of a job, offers to help Barbatea organize the books for a small pay.

The following day after school, Bloom searches all throughout Magix for work but she is turned down at every store. Since it was raining that day, Bloom catches a cold. She accidentally makes Wizgiz catch her cold, which causes class to be let out early. Feeling like her search for a job is hopeless, the girls find an advertisement for a restaurant called the White Horse.

At the White Horse, Bloom introduces herself to the owner of the restaurant, Madame Greta, who tells her that there are two other girls applying for the job. With only one position open, Greta has the three compete to sell the most drinks before their shift ends. Unfortunately, the two other girls have already picked their areas, leaving Bloom with the section that usually has the least customers.

Meanwhile, at the library, Codatorta has the Specialists accompany Musa to check the new room for any signs of dangerous life-forms. Musa talks to Timmy but is especially interested in meeting his friend, Riven. As she continues to retrieve books from the new room, Musa ends up a bit too deep, where she is quickly snatched up by Riven because he spotted a monster. Musa tries to be friendly to Riven but he quickly tells her that he is not interested in making friends, thinking that friendship is just an excuse to use people and not have to give them anything in return.

Back at White Horse, Madame Greta complains that the humidity is causing her bones to ache and that she does not know how to change the air conditioner. Bloom offers to change it for her, since she learned how to do so in her mom's flower shop, and makes the air in the building drier. Due to the drier air, the customers start becoming thirstier, allowing Bloom to sell more drinks than before.

At the end of the day, despite the other two girls selling more drinks than Bloom, Madame Greta gives Bloom the job for having worked harder.

When Bloom arrives back at their dorm, she is told by Stella that Musa is upset, specifically over her encounter with Riven. In order to cheer her up, the Winx offer to take her out the next weekend. Unfortunately, that is the same weekend Bloom has to work so she can not go out with them. However, all the girls and the Specialists surprise her by eating at the White Horse that day and, from then on, it becomes their regular hangout spot. 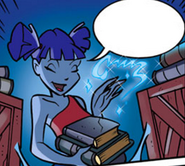 "The signs of time must disappear. Clean and shiny it must return!"
Add a photo to this gallery

Retrieved from "https://winx.fandom.com/wiki/Issue_9:_A_Job_for_Bloom?oldid=515407"
Community content is available under CC-BY-SA unless otherwise noted.