Joaquim is a character exclusive to the Winx Club Comic Series with his debut being Issue 102: Winx Music Tour: An Enchanted Melody during the Winx Music Tour mini-series. Initially, he is a guitarist for Clarice who later turns out to be a wizard that uses the magic of his guitar to entrance people.

Joaquim has light brown, long, layered, nappy hair in dreadlocks. He also has dark skin, and brown eyes. He wears an orange v-neck shirt with a white undershirt, blue capris and boots, and accessorizes with wristbands. 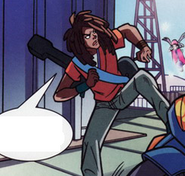 Joaquim appears to be a hopeless romantic, quickly falling in love with popstar Clarice when he saw her sing and was extremely angry when he felt betrayed by her love. It is shown that he is very sensitive which results in a violent approach as seen when he almost committed something murderous.

However, he is honest as he accepted the Winx's reasoning for his actions and is apologetic. He also appears to be quite interested in industry related subjects.

In Winx Music Tour: An Enchanted Melody, after performing on stage at a beach, he and Clarice were arguing backstage about each other's performance and jealousy over each other's talent. Having had enough of the argument, Clarice kicks Joaquim out of the band, which he gladly accepts and walks away saying that she will regret doing so.

And true to his words, Joaquim had hypnotized Clarice's fans into staying out late and causing trouble. The next morning, news of this begin to surface. And the concerned Winx tracked down Clarice once more to ask if she knew anything about this incident. In tears, Clarice explains that Joaquim was behind this and provided a backstory as to why Joaquim is acting like this. As it turns out, Joaquim had seen Clarice sing at a bar one night and fell madly in love with her. His love for her was rather immense and promised to make Clarice famous with his powers in return for her love. When asked about Joaquim's possible whereabouts, Clarice mentions that he is fond of an industrial area that he brought her to. This was proven correct as Joaquim was on his way to that area where the missing fans are. Eventually, the Winx had found him and chased after him on the road to stop him from doing more harm.

He tried his best to steer the Winx off his tracks but they were persistant and followed him to his destination - the harbor. Once there, he wastes no time in utilizing his haunted guitar to play a hypnotic music spell that causes all of Clarice's fans to obey his orders - which is to enter the harbor and drown. The spell was also taking affecting on the Winx but luckily, since Musa is immune to music spells she stops the spell. The Winx then use a convergence spell to end the hypnotic spell, saving the fans' lives. Defeated, Joaquim falls to his knees and he explains that he felt so heartbroken when he realized Clarice only used him and never loved him.

While Bloom understands that Clarice is also in the wrong, she explains that it was wrong of him to misuse his powers for the sole purpose of revenge and most especially, on innocent people. He realizes that she is right and apologized. The Winx then offered him advice on how to make it up to Clarice. By holding a concert with her and the Winx. In the end, they enjoyed performing altogether on stage and it seems that Joaquim eventually earned Clarice's love.

Like all magical beings, Joaquim likely possesses all basic level magic spells and skills. He is shown to be a capable and powerful magic user, seen when his attack spells were proven to be strong and deadly during his fight with the Winx. It seems he has power over flames and thunder but his true source of power was not specified. His magic is different shades of blue when he uses certain spells.

Alongside his natural mystical abilities he owns two mystical items: a bike and haunted guitar. The bike allows him to travel at high speeds which prompted Bloom to use her fiery powers to help catch up to him during the chase. The guitar plays hypnotic music which is what not only helped Clarice gain her fans (through a trance) but was also used to control people. This is shown to be effective even with highly experienced magical beings, such as the Winx.

Joaquim, though rather advanced in magic, still does have difficulty maintaining his hypnotic spell if his opponent is immune to his music based spells, in this case Musa. She easily cancelled out his hypnotic spell and through a Winx Believix convergence, completely ended the trance on the fans.

It is uncertain as to whether Joaquim also has an affinity to music spells or if those mystical abilities stem from his haunted guitar.

Retrieved from "https://winx.fandom.com/wiki/Joaquim?oldid=476640"
Community content is available under CC-BY-SA unless otherwise noted.