Pixie of Fortune-Telling
PopPixie of Entertainment

Jolly is the Pixie of Fortune-Telling. She uses a version of tarot cards to tell the future and is Livy's older sister. In the movie, she was seen playing with Mirta after the pixies helped restore Alfea. Jolly's visions always come true, but even so, some people do not believe her.

Jolly is a social pixie, who enjoys telling people their fortunes. She enjoys to play with her friends, and help out as much as she can. Being a fortune teller, many people do not believe her when she's telling predictions; she holds no grudge against those who do not believe her abilities. She is an honest pixie, and tells the truth straight out, even when others do not want to hear the truth. In the Pop Pixie series, she (who turns into a male pixie) becomes much more tricky and fun.

Jolly is a fair skinned pixie with light purple colored eyes, dark purple eyelashes, and pale pink lipstick. Above her left eye is a pale pink mark; while on the right is a slightly darker pink mark. She wears a jesters uniform, consisting of a teal-green right sided jester cap while the left is hot pink. The boots match the hat, while the dress is opposite in color with a pale yellow neck piece. Jolly's wings resemble a butterflies almost and are light blue. 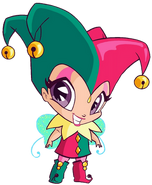 Jolly wears an all jester outfit. Half of his hat is pink and the other purple. the four ends of his hat have chimes hanging. He also has long-sleeved jester outfit, now the opposite of his hat. His pants are teal and his shoes match his hat's colors.

Jolly still wears a jester hat, but now its full magenta, with chimes hanging. Like the other male pop pixies, he wears a helmet. He wears a jester's clothes with a neck tie. He also wears arm-length bracelets. His pants are tucked in his purple boots.

She makes her first appearance in "Hallowinx" when she tags along with the pixies and the Winx to Gardenia. Throughout the episode, she is seen reading fortunes and senses a conflict. She also is seen in "The Time for Truth," when she tells Amore that she is not going to feel better. Amore is upset, and Livy tells Jolly that it was not nice of her to say that so Jolly offers Amore a tissue.

In "The Tree of Life," Jolly and her fellow pixie friends are swallowed by a monster conjured by Piff's nightmare. She is trapped in there and Stella joins her. As it turns out this monster was manifested by a Dream Eater Butterfly that Piff somehow got on her. Once Aisha removed it Jolly is freed. With her Queen and friends, they take the Winx to the Tree of Life as they search for the Last Earth Fairy. When Jolly learns that there is another fairy joining the Winx, she gets excited. She then says goodbye to the Winx as they start their knew mission.

In "The Legendarium," Jolly makes a brief appearance when the Pixie Village is attacked and is taken into the Legendarium. She remains there until she is freed by Aisha. Later, to rid Alfea of the Alfea Champions, she bonds with a fairy alongside her fellow pixies.

Jolly's main appearance is on "Jolly's Crackling Exhibition". He stops the singing birds from eating the whole of Pixieville. Afterwards he is show at the background with others Pixies.

The Secret of the Lost Kingdom

In the first movie, Jolly first appears after Alfea is destroyed in the battle with Mandragora. She then appears again entertaining Bloom while the rest of the Winx and Pixies are searching for the key of Obsidian in the Tree of Portals. Her act scrambles the keys.

In Winx Club, Jolly has the ability to summon tarot cards, which she uses to tell someone's fortune or future. Since the first movie, Jolly's powers are affected being now able to create energy spheres used for entertainment such as fireworks. In the fourth season, it was discussed that Jolly can also use her cards for entertainment.

In the PopPixie series, after obtaining his MagicPop, Jolly was given the ability to transform into a rocket.