Jonas is a character exclusive to the comic series and his only appearance is in Issue 41: Love Beach.

He wears a black shirt with a high collar and is open a bit at the chest. He also has on white jeans. 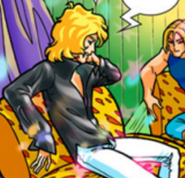 He wears a green top with a hood, with an opening at the chest and a yellow line pattern on it. He has on white pants, and brown shoes on.

He is shown to be manipulative, fake crying over someone who most likely does not exists so Tecna would feel sorry for him. And he gets his friends to keep Timmy away, while he manipulates Tecna. He claims that he will declare his love to Tecna, but he's mostly only going this so he can brag to his friends, and even brags about his acting abilities. Only for him to be caught the one times her gets flustered and watches as Tecna leaves after she slapped him.

Jonas does not make his debut until the second day of the fairies, witches and Specialists' vacation in the Holimagix realm. He and his friends spot Tecna after Timmy leaves her to practice surfing again and make a bet for Jonas to make Tecna his within two days otherwise he will have to treat the Trix to a free night at the Don Juan nightclub.

As Jonas tasks his friends with keeping Timmy busy, Jonas runs off to the far end of the beach and pretends to sob in order to talk to Tecna with her guards down. He makes up a story about his supposed fiancée, Hellen, who had fallen ill and died before they could get married and begs for Tecna to walk with him for the whole day to ease his pain. As they walk together, Jonas' friends drag Timmy to the Don Juan nightclub against his wishes.

Tecna later talks about Jonas to the Winx and ends up getting a call from Jonas after hanging up on Timmy. After sweet-talking Tecna, the two of them make plans to meet up together at the beach again by tomorrow. Once they end their call, Jonas celebrates his "victory" with his friends and claims that they will get to see the "grand finale" by tomorrow night.

The next day, Jonas calls Tecna over to the far end of the beach where he confesses that he wants Tecna all for himself. With enough pressuring, Jonas is able to convince Tecna to break up with Timmy so that he can declare to all of his friends that she is his girl at Don Juan.

That night, Jonas brags to his friends and the Trix that Tecna will show up. He also brags about how dramatic of an actor he is and how his performance even caused Tecna to break up with her boyfriend just for the chance of being with him. Unfortunately for him, Tecna decided to come an hour earlier to surprise him and overheard everything. Jonas is then slapped across the face and falls over, knocking down all of the cushions he and his friends were sitting in as Tecna storms off heartbroken.

Retrieved from "https://winx.fandom.com/wiki/Jonas?oldid=482429"
Community content is available under CC-BY-SA unless otherwise noted.